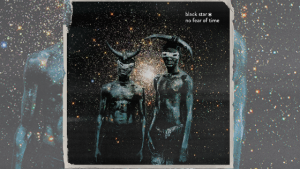 After 24 years since the release of their debut album, Mos Def & Talib Kweli Are Black Star, Yasiin Bey (formerly Mos Def) and Talib Kweli, the hip-hop duo known as Black Star, are finally set to release their highly anticipated second album, No Fear of Time. The album will be available exclusively on the podcasting platform Luminary.

Set to be released on May 3, the album comprises nine tracks, all of which were recorded “guerrilla style in hotel rooms and dressing rooms around the globe.” No Fear of Time is said to hone a “future vibe with vintage soul,” ultimately living up to its highly anticipated coming from the iconic Brooklyn rap pair.

Luminary is also home to the duo’s podcast with Dave Chappelle, The Midnight Miracle. According to the platform, the first episode of season two titled, “Bugs Bunny Mathematicx,” “serves as audio liner notes to introduce the album.” The following episode, “Mineral Mountain,” features a Black Star freestyle with Black Thought produced by Madlib.

Since their debut album, the duo has managed to continue creating their refined hip-hop sound throughout the victorious solo projects of both Yasiin Bey (Mos Def) and Talib Kweli, ultimately producing era defining hip-hop works.

At the time using the moniker Mos Def, in 1998 Yasiin Bey released his solo debut Black on Both Sides under Rawkus records. Bey’s musicianship is a full display with tracks such as “UMI Says,” “Mathematics,” and “Ms. Fat Booty.” The cosmic individuality showcased by Bey highlights his melodic fluctuation between rapping and singing, set the tone for the new millennium’s hip-hop sound. The album peaked at number one on the US Billboard Top Rap Albums chart in 1999.

In 2002, Talib Kweli released his debut album Quality, where the Brooklyn native displays a refined level of their boom-bap tendencies with a flair of rich instrumentation. The Kanye West produced single, “Get By,” hit the Billboard Hot 100 at number 77, ultimately making the album a commercial success. Quality peaked at number 6 on Billboard’s Top R&B/Hip-Hop Albums chart. Prior to Quality, Talib Kweli teamed up with producer Hi-Tek to form Reflection Eternal and released Train of Thought, which features one of Kweli’s referenced tracks, “The Blast/Down For The Count.”

“Our fans always ask about the possibility of a second Black Star album,” Talib Kweli shares on The Midnight Miracle. “To that end, we’ve had many false starts. But we also realize that great music happens organically and we’ve never wanted to force it. Black Star was and is a vibe.”