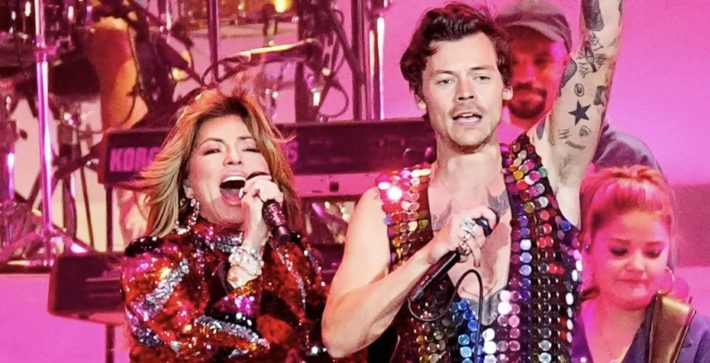 The former One Direction star, who is now a bonafide solo star big enough on his own to headline Coachella, has been having quite a time at the celebrity-infused event.

The 28-year-old musician closed out the first night of the Indio, California, music festival on Friday evening with a show-stopping setlist — that featured two brand new songs — as well as a surprise guest appearance from Shania Twain.

During the show, Styles opened with his brand new single “As It Was,” before he performed an array of songs from his sophomore album, Fine Line, including hits “Adore You,” “Watermelon Sugar,” and “Golden.”

The singer also mixed in some songs from his self-titled debut LP, such as “Carolina” and “Woman,” as he performed two tracks that are presumably off his upcoming Harry’s House album (out May 20), “Boyfriends” and “Late Night Talking.”

Styles even performed a solo rendition of his One Direction megahit “What Makes You Beautiful,” before Twain, 56, joined him onstage to perform a few of her own tracks, “Man! I Feel Like a Woman” and “You’re Still the One.”

The former boy band member previously performed the latter song during a memorable New York City show that took place as part of his first concert tour with Kacey Musgraves — who served as the event’s opening act.

While performing with Twain, Styles addressed the crowd before him, saying, “Now I have to tell you, in the car with my mother as a child, this lady taught me to sing.”

“She also taught me that men are trash,” he continued with a laugh, before adding, “but to you, for the memories you gave me with my mother, I will be forever grateful.”

Twain, who was just as excited to perform alongside Styles, noted: “I’m [at a] loss for words, I’m a bit starstruck … when I was writing this song, you were just a kid, so it’s kind of a dream and very surreal to be sitting right here now, singing this song with you.”

After the event, the country-pop crooner also shared a message of support on Twitter, writing, “I mean c’mon…. HARRY STYLES,” alongside three fire emojis.

Coachella is making a triumphant return to the desert this year after two years on hiatus due to the COVID-19 pandemic. The festival takes place over two weekends, April 15 to 17 and April 22 to 24.

Styles will be followed by co-headliner Billie Eilish on Saturday night, while The Weeknd — who previously headlined the festival in 2018 — will perform with Swedish House Mafia on Sunday night.

Harry Styles and Shania Twain sing “You’re Still The One” at #Coachella pic.twitter.com/tmfZ1409GW