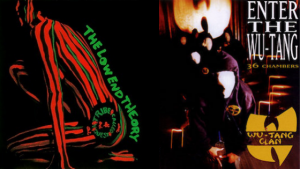 As the defining era of the nineties continues to mature, the admirable sounds of the beloved time reign heavily in longevity. Earlier this week, the Library of Congress announced the names of 25 recordings have been added to the National Recording Registry for 2022 including Wu-Tang Clan’s Enter the Wu-Tang (36 Chambers) and A Tribe Called Quest’s The Low End Theory.

According to the Library of Congress, the records that were chosen to join the registry “were influential in helping to deepen and grow the genres of rap, hip-hop and R&B in American culture.”

A Tribe Called Quest’s The Low End Theory is recognized for its distinct fusion of jazz into the palm of rap. The diversified production by Ali Shaheed Muhammad, the unique tone of Q-Tip, the lyrical stiffness of Phife Dawg, and the trivial presence of Jarobi marbled a profound lane during a time of budding hip-hop culture.

Released in 1993, Enter the Wu-Tang (36 Chambers) is the groundbreaking debut album of the Wu-Tang Clan and went on to set the tone for the hip-hop sound of the east. Presenting nine Staten Island-based emcees, with three of them stationed in Brooklyn, Enter the Wu-Tang comprised four hit singles, “Protect Ya Neck,” “Method Man,” “C.R.E.A.M.,” and “Can It Be All So Simple,” in which the success of each single resulted in revamping New York City’s notoriety in the genre.

In order to be inducted into the Library of Congress’s National Recording Registry, a work must be at least 10 years in age and “culturally, historically, or aesthetically significant” to American culture. Due to hip-hop’s grand role in the face of American music, classic recordings that hold an undeniable impact are bound to be considered.

Enter the Wu-Tang and Low End Theory will join historically notable hip-hop works including “The Message” by Grandmaster Flash and the Furious Five, Public Enemy’s Fear of a Black Planet, Tupac Shakur’s Dear Mama, Dr. Dre’s The Chronic, Nas’ Illmatic, Jay-Z’s The Blueprint, and many more.