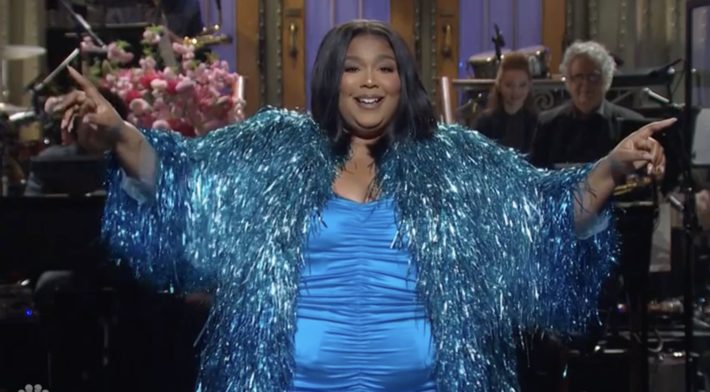 Lizzo’s talent was on full display Saturday (April 16) as she hosted and performed as the musical guest on “Saturday Night Live.”

Lizzo joined an elite club of recording artists tapped to both host and perform on “Saturday Night Live” in an episode that started with outrageous Easter messages from politicians and celebrities.

“I’ve been saying aggressively to all my Jewish and Muslim colleagues, Happy Easter!,” she said before declaring the holiday had gotten “a little too LGBTQRT.”

“And there is nothing gay about Easter. A day when a bunch of male priests worship a shirtless guy with great abs and talk about wanting to eat his body. That’s straight stuff,” Strong-as-Green quipped.

Chris Redd reprised his imitation of Mayor Eric Adams as a cocky Casanova who was excited for spring, and glad the Brooklyn subway shooter was no longer his problem.

“Don’t adjust your television set, I am this handsome, ya understand?” he boasted.

“We got him. We got the shooter. Sure it took 30 hours, and the suspect turned himself in, but we got him. Case closed,” the mayor continued to brag.

Kate McKinnon’s deflated Dr. Anthony Fauci was tiring of yet another COVID-19 surge as he warned people about holiday gatherings.

“I’m not here to give to give you any more COVID guidance; I’m not stupid enough to think you’ll follow it,” the fake Fauci said.

Singer and rapper Lizzo, 33, drew big applause in her monologue by reflecting on the arc of her rags-to-riches career.

“At every show I tell my audience the same thing and I’ll tell you too: I love you, you are beautiful and you can do anything. I am proof of that. I used to live in my car and now I’m hosting Saturday Night Live,” she said to rousing applause.

The NBC show was slated to take a three-week hiatus and return to the airwaves on May 7 featuring guest host Benedict Cumberbatch and musical guest Arcade Fire.