Undisputed, still undefeated welterweight champ may be next 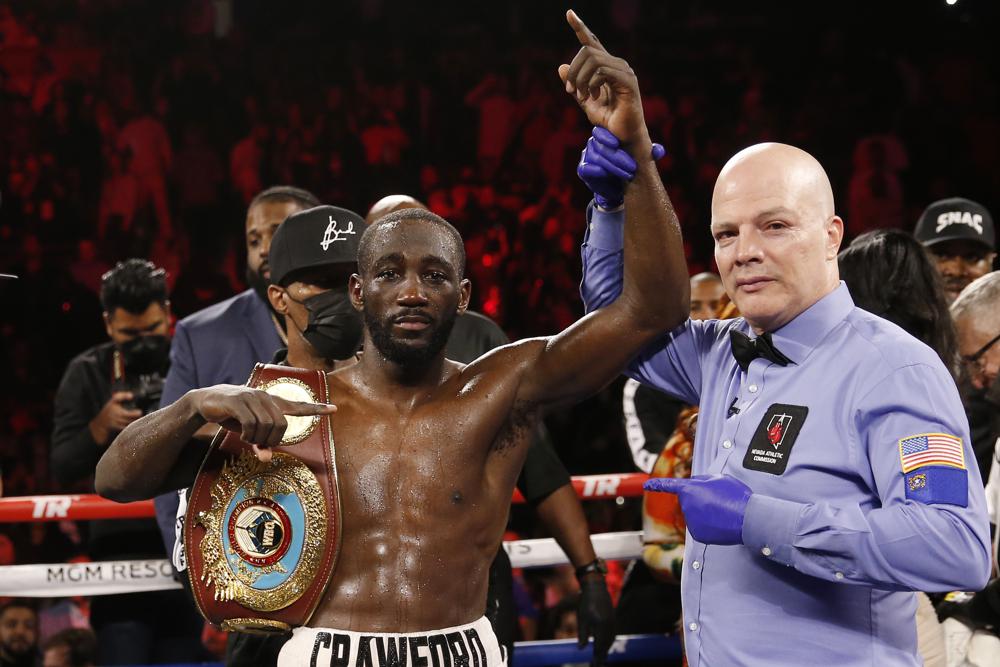 Undefeated champs Errol Spence Jr. and Terence “Bud” Crawford may finally get in the ring together.

There could be an undisputed, and still undefeated, welterweight champion later this year.

Undefeated champs Errol Spence Jr. and Terence “Bud” Crawford may finally get in the ring together. Both have made it clear that is what they want to happen.

Soon after WBC and IBF champion Spence won his unification bout to take the WBA belt from Yordenis Ugás, WBO titleholder Crawford tweeted that it was time for the “real fight” to happen.

“Everybody knows who I want next. I want Terence Crawford next,” Spence said after his scheduled 12-rounder with Ugás was stopped in the 10th round late Saturday night. “That’s the fight that I want. That’s the fight everybody else wants.”

Spence (28-0, 22 knockouts) had already been talking about wanting to face Crawford and the possibility of an undisputed championship even before adding his third belt Saturday night. An energized home crowd of 39,946 was there for Spence’s first fight since his 12-round unanimous decision over Danny Garcia more than 16 months earlier — also at the home stadium of the NFL’s Dallas Cowboys.

The 34-year-old Crawford (38-0, 29 knockouts) last fought in November, a 10th-round TKO of former champ Shawn Porter. That was Crawford’s fifth defense of the WBO title he first won nearly four years ago.

In his tweet directed at Spence, Crawford wrote, “congratulations great fight now the real fight happens. No more talk no more side of the street let’s go!!!!”

Another tweet read, “keep my belts warm I’ll be coming to grab em later this year.”

There are still plenty of details and negotiations to be worked out before there will be a fight with unprecedented title implications in the 147-pound division — and a lot of big money on the line.

“I’m not going to talk about what’s going to be fair for both us,” the 32-year-old Spence said about potentially difficult negotiations. “I have guys in suits to go over all of the analytics and stuff like that. … He’s got his people.”

Spence’s fight against Ugás was stopped 1:44 into the 10th round with the now-dethroned WBA champion’s right eye swollen shut.

“All my respect to Errol Spence. He’s a great champion,” Ugás said in the ring before being taken in an ambulance to a local hospital for observation. “I’m just sad about what happened. … The referee stopped the fight, but I wanted to keep going to the end.”

Ugás in the sixth delivered an uppercut that sent Spence’s mouthpiece across the ring. Before the hometown favorite could gather himself, Ugás connected with a left-right combo to the head that send Spence stumbling back toward the ropes, though he didn’t fall to the mat.

Shortly after that, referee Laurence Cole paused the round and sent Spence to his corner to put back in the mouthpiece.

“I definitely had a chance to win the fight in the sixth round, but he recuperated well,” Ugás said.

Spence seemed to be his strongest after that short reprieve, and after a few rounds to find his rhythm after that long layoff.

With the right eye of Ugás already noticeably swollen, Cole first had the 35-year-old Cuban boxer checked by a ringside doctor in the eighth round before letting the fight continue.

But during another mid-round consultation with the doctor in the 10th, with that eye basically shut after more pounding from Spence, the fight was stopped.

Ugás was coming off a 12-round unanimous victory last August over eight-division world champion Manny Pacquiao, a fight he had 11 days to prepare for after Spence had to be replaced because of a torn retina in his left eye.

Spence said he was never concerned about his own eye, adding it is stronger than ever after the surgery to repair it.

“I’ve been in the gym, I’ve been sparing, so I didn’t have any questions,” Spence said. “Y’all had questions and the doubt. … There was no tentativeness or anything like that. I was fighting to get a knockout. I felt good.”

The post Undisputed, still undefeated welterweight champ may be next appeared first on TheGrio.