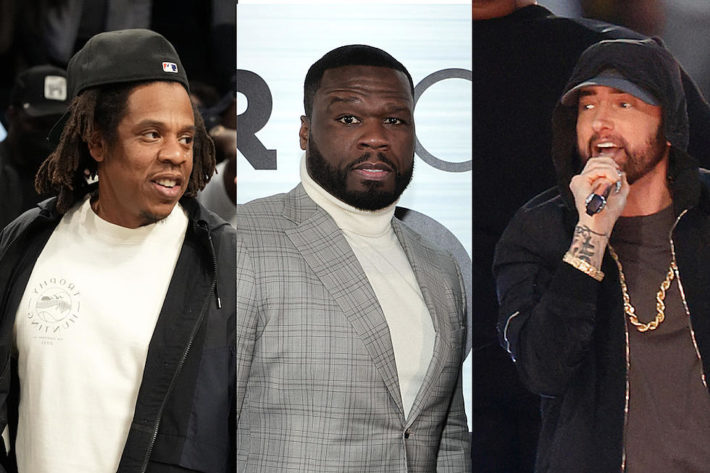 50 Cent recently slammed Jay-Z on social media after it was revealed that Eminem wouldn’t perform at the 2022 Super Bowl halftime show without Fif.

Back in February, Dr. Dre, Snoop Dogg, Eminem, Kendrick Lamar, and Mary J. Blige performed at the NFL’s Super Bowl Halftime Show. The performance was put together by Jay-Z, who is in his second year as the NFL’s Live Music Entertainment Strategist. In addition to the aforementioned artists, 50 Cent and Anderson .Paak also made surprise appearances during the halftime show. During a recent episode of Drink Champs with Snoop Dogg, N.O.R.E., who co-hosts the show with DJ EFN, revealed that Jay-Z told him that Eminem said he would not perform without 50 Cent’s participation in the halftime show.

50 Cent took issue with Jay-Z referring to Eminem as “the white guy,” and hopped on Instagram to respond. “Why would he have to say that should be the question?” 50 Cent captioned one post insinuating that he would not have performed without Eminem’s ultimatum. “NORE Your big homie is running around trying to look like a gay painter. LOL.” In a second post, which featured Jay-Z next to a picture of Jean-Michel Basquiat, 50 Cent wrote, “Why did he say the white boy, why he didn’t say the biggest rap artist in the world? Happy Easter! man enjoy the holidays.”