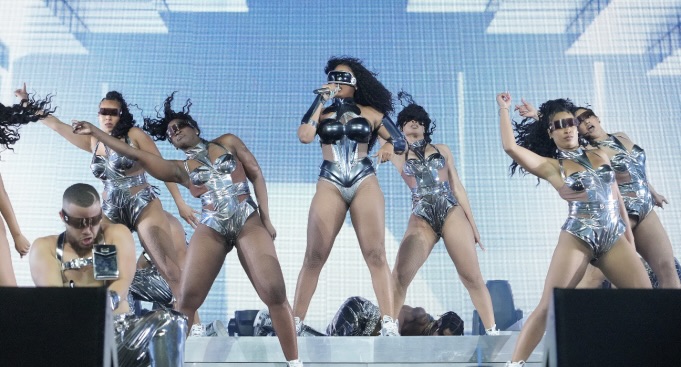 Megan Thee Stallion was a definite highlight of Coachella 2022’s first weekend. She was also a notable presence for at least one Chinese censor, who had a hard time properly obscuring Meg’s performance of “WAP.”

As The Hollywood Reporter notes, users on Chinese social media and messaging app WeChat were illegally livestreaming the festival this past weekend, all while censors tried their best to obscure moments that violated, as the publication put it, “China’s increasingly moralistic censorship rules.” A video that surfaced on social media showed a WeChat censor having a particularly hard time with Meg performing “WAP.” In the clip, a small black rectangle flies around the screen trying to cover the butts of Megan and her dancers, which were mostly exposed by their revealing outfits.

Coachella is also being livestreamed via WeChat. Apparently, this performance not only made censors sweat, everyone was also joking that they’re singing a song about Shanghai Puxi District. #MeganTheeStallion #Shanghailockdown pic.twitter.com/2ltSqzFC9c

Uproxx’s Aaron Williams was at Coachella and in his recap of the festival’s second day, he noted of Meg’s performance, “Another huge crowd that focused more on having fun than pushing forward was the one for Megan Thee Stallion, who preceded day two’s closer, Billie Eilish. Like 21 [Savage], her set was a briskly-paced showcase for some of her bigger hits. Unlike his, hers incorporated a wardrobe change to a mini-DJ set of some of her mixtape favorites. Her set also included a confrontational new track that seemed to take some verbal jabs at a male antagonist — something that’s sure to have fans buzzing for the next few days.”

The post Chinese Censors Got A Workout With Megan The Stallion’s Coachella 2022 Performance Of ‘WAP’ [Video] appeared first on LOVEBSCOTT.