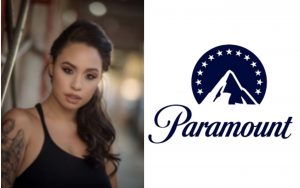 Katrina “Kat Tat” Jackson, a tattoo artist, television personality, and entrepreneur, has signed a First-Look, Development, and Executive Producer agreement with Paramount, it was announced today. As part of the deal, Jackson will collaborate with her production firm, Enigma Entertainment Group, to develop and executive produce unique content for Paramount.

“I couldn’t feel more blessed and I’m excited to partner with Paramount as they continue to bolster a new generation of BIPOC and women creators,” said Jackson. “I’m thrilled to not only return to TV, but to also create and produce new, fun, fresh, compelling and impactful content across all platforms.”

She will also provide on-camera services, including her long-awaited return to the Black Ink Crew franchise on VH1’s Black Ink Crew: Compton, which will run Monday nights. Jackson dazzled the globe as the star of VH1’s Black Ink Crew: Chicago for three seasons, creating a stunning tattoo on her own thigh during an outstanding episode of the show. She left the show in 2017 to focus on her own business and became the first Black woman to own a tattoo studio in Beverly Hills, California. Since then, Jackson has tattooed a slew of celebrities and athletes, including Idris Elba, Trey Songz, Faith Evans, and Von Miller.

Jackson’s artwork has been featured on ESPN, Rolling Stone, Inked, Refinery 29, VH1, BET, and a slew of other platforms and newspapers throughout the world. Jackson’s work has been shown at galleries across the country, including Art Basel in Miami, where she sold unique pieces to Chad “Ocho Cinco” Johnson and comedian Deon Cole. She’s also partnered with a number of well-known firms in the beauty and fashion industries, including Shoe Dazzle, Fashion Nova, Pretty Little Thing, Cantù Beauty, ORS Hair Care, and True Religion.