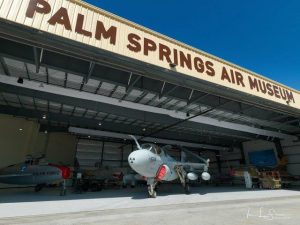 On Friday, April 15 and Saturday, April 16, Remezcla is hosting a series of after-hours parties at the Palm Springs Air Museum. Both events are free to those aged 21 and above, but fans must RSVP in advance at RemezclaHouse.com to secure a space.

“Having two of the original creators of what we now know as modern reggaeton perform on our Desert stage, along with someone like Venus X, who has been pivotal in taking various sounds from the underground and mixing them with Latin music, to us is just incredible. You can literally see the torch being passed on this lineup: from DJ Playero in the “underground” days, to Blass’ rave-induced perreo, to Venus X’s high-energy melange of music, fashion and culture,” said Remezcla Editor-in-Chief Thatiana Diaz.

The Remezcla House in the Desert events will begin at 9:00 p.m. each night and will feature some of today’s greatest Latin DJs, both established and up-and-coming musicians, as well as some very special surprise guests. Attendees will be treated to a wide range of Latin music genres and subgenres during the course of the two-night event.

DJ Playero, the father of Puerto Rican underground music, kicks off Night 1 on Friday, March 15th, with performances by Venus X, one of the world’s most prominent Latine DJs and fashion icons, as well as hypnotic sets from Girl Ultra and UGLY Primo.

You cans ee the lineup below.

The Major General Miles Hangar in the historic Palm Springs Air Museum serves as the backdrop for the whole two-day event. Remezcla participants will be treated to a genuinely one-of-a-kind VIP experience to honor their springtime visit to the Coachella Valley, with over 20,000 square feet of dance floors, interactive activations, and complimentary refreshments.

“Latin music is having a moment right now with its largest presence ever at major U.S. music festivals across the country. We’re celebrating this year’s surge in Latin artist bookings by bringing Remezcla House, our Latinx music and culture experiential series, to the Coachella Valley. With support from Pandora and Tecate, we hope that Remezcla House in the Desert will help shine a light on the diversity of Latin music culture, while creating a truly unforgettable weekend in the desert,“ said Remezcla Managing Director Neylu Longoria.

You can learn more about Remezcla House in the Desert by news dropping at RemezclaHouse.com