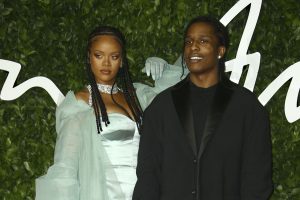 Following a week of cheating and breakup rumors, Rihanna and A$AP Rocky appear to still be very much together if photos from their weekend trip to Barbados are any indication of their relationship status.

Photos of the couple, obtained by TMZ, show the hip-hop megastars (who are expecting their first child together) holding hands as they arrived at the Barbados airport. (Rihanna is a native of the island nation.) The Daily Mail shared photos of the couple heading out to dinner later that night, a pregnant Rihanna in a black minidress and Rocky sporting a more casual look of jeans and a t-shirt.

The photographs come following a week of rumors that the couple, who have been dating since 2020, were either broken up or on the rocks following allegations that Rocky cheated on Rihanna with Fendi designer Amina Muaddi.

Muaddi addressed the unfounded rumors on her Instagram Story on Friday, writing: “I’ve always believed that an unfounded lie spread on social media doesn’t deserve any response or clarification, especially one that is so vile. I initially assumed that this fake gossip — fabricated with such malicious intent — would not be taken seriously. However in the last 24h I’ve been reminded that we live in a society that is so quick to speak on topics regardless of factual basis and that nothing is off limits. Not even during what should be one of the most beautiful and celebrated times in one’s life. Therefore I have to speak up as this is not only directed towards me but it is related to people I have a great amount of respect and affection for.”

For now, the couple appears to be very much together and expecting the birth of their first child together any day now.

The post Rihanna and A$AP Rocky Spotted Together in Barbados amidst cheating rumors appeared first on The Source.