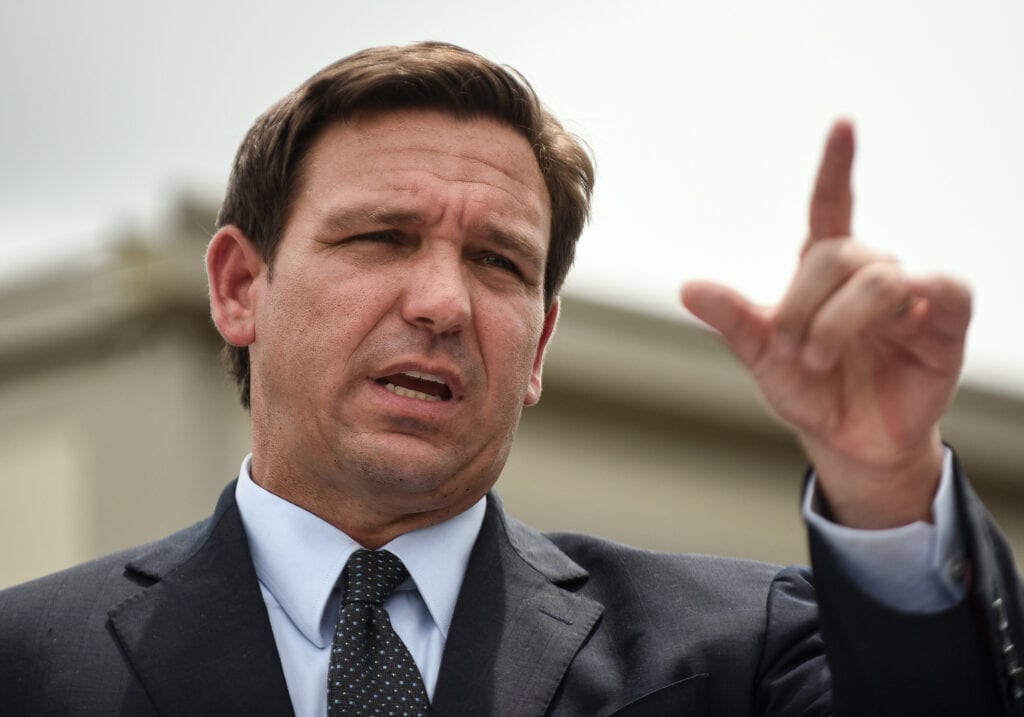 EXCLUSIVE: New maps drawn by Republicans in states from Georgia to Texas are deliberate tools to suppress Black and Brown voters, critics say.

A political battle over Florida’s redrawn congressional map is bringing new attention to the issue of nationwide gerrymandering and what critics say is an attempt to suppress the power of Black and Brown voters.

This week, Republicans in the Florida State legislature are expected to vote in favor of a congressional map redrawn by Gov. Ron DeSantis that would eliminate two majority Black and Brown districts represented by African American members of Congress.

The Republican-led legislature, which is constitutionally tasked with reapportioning congressional maps, approved a map that kept congressional districts 5 and 10 intact. However, after Gov. DeSantis vetoed that map, Republican leadership announced last week that they would not draft another map, and would instead allow DeSantis to present the map of his preference.

“I think they have been bullied by the governor. This is the first time in the history of Florida that the House and the Senate are not doing their constitutional responsibility,” U.S. Congressman Al Lawson, whose majority Black district, Florida’s 5th congressional district, would be all but eliminated by DeSantis’s proposed map, said in an exclusive interview with theGrio.

Lawson, who before being elected to Congress served nearly 30 years in Florida’s state House and Senate, said there’s “no question” that DeSantis and Republicans are intentionally targeting him and Rep. Val Demings, who represents Florida’s 10th congressional district, because they are Black members representing minority communities.

Florida State Senator Shevrin Jones, a Democrat, told theGrio, “Governor DeSantis’ effort to play King map drawer in Florida is the latest writing on the wall that Republicans will do anything to win. If they can’t win off of the issues, they move the goal post, but it’s usually on the backs of marginalized people.”

“If Floridians (and Americans) don’t see that Gov. DeSantis and the Republicans are testing the judicial system just to see how far they can go, then they’re not paying close enough attention. What we are seeing is not just egregious, but it’s scary, and we all should be concerned for our democracy because it is hanging on by a thread.”

Florida has long been a battleground between Democrats and Republicans over the years. Advocates note that what is taking place in Florida is only one example of several congressional maps proposed or approved by Republicans nationwide that seek to eliminate or critically alter districts represented by Black members of Congress.

The issue of gerrymandering is not new in politics and certainly not exclusive to one political party, but it can have a long-lasting impact as congressional maps – which determine the breakdown of districts and ultimately who constituents send to represent them in Congress – are only drawn every ten years based on data from the U.S. Census.

In Texas, where 95% of the state’s population growth was driven by Black, Latino and Asian residents over the past decade according to Census data, the new congressional map drawn by Republicans would displace most of Congresswoman Sheila Jackson Lee’s majority Black district and force her to run against fellow Black Congressman Al Green. The Texas map is currently being challenged in court by the U.S. Department of Justice as a violation of the Voting Rights Act.

Green has served in Congress for nearly 20 years, while Jackson Lee, the second longest-serving member of the Texas delegation, has been in Congress for almost three decades.

In Georgia, a map signed into law by Republican Gov. Brian Kemp similarly turned the state’s 6th congressional district, represented by Congresswoman Lucy McBath, into a strongly held Republican district. The map was challenged in federal court, but a judge ruled in March that the map could remain in place for this year’s elections, arguing it was too close to the state’s May 24 primary to order a redrawing of the map.

Andre Fields, Political Director at Fair Fight, told theGrio that Republicans’ redistricting map in Georgia was a “transparent ploy to remove a Black woman from Congress.”

“They knew that they can no longer compete in the Atlanta suburbs as we saw in Cobb County, which was historically a red county and was the home of [former Republican congressmen] Newt Gingrich and Tom Price,” Fields noted. “It became a pretty much solidly Democratic district over the last couple of cycles, and Republicans have just seen that they can’t compete there anymore.”

Georgia notably elected two Democratic Senators in the 2020 election and solidified the party’s majority in Congress. Black and Brown voters in the Peach State were largely credited for those wins, as well as handing President Joe Biden his Electoral College victory in the state against former President Donald Trump. Since then, Georgia has become known as “Ground Zero” for voter suppression due to voter restriction laws Republicans adopted over the past year.

Much like condemnation lobbed at the GOP across the country, Fields said Georgia Republicans are on a quest to retain power at any cost. “We see the sort of shift in power and Republicans see it too. They’re trying everything that they can to make sure that they can hold on,” Fields told theGrio. “It’s almost similar to what’s going on in Florida right now.”

Congressman Lawson said that Gov. DeSantis’s push for the congressional map that redraws his northern Florida, solidly Democratic district into a portion of Jacksonville that voted overwhelmingly for Donald Trump in the 2020 election is all a ploy for Republicans to take back the majority in the U.S. House and make Rep. Kevin McCarthy Speaker of the House – and for DeSantis to build up his base for his expected run for U.S. president in 2024.

“Our [majority] numbers [in the House] are a very close. If you can eliminate two African American seats in Florida, then it helps Kevin [McCarthy] have a better chance to become Speaker. And on the national level, he shows that for other governors who are planning on maybe running in three years for president…that he is the guy,” Lawson told theGrio.

Ultimately, Lawson said, the map expected to be approved in the Florida legislature and signed into law by DeSantis would be challenged in court. Voting rights groups have already filed legal complaints ahead of the map’s approval.

The issue of gerrymandering and the potential suppressing of Black voters also comes as the Voting Rights Act of 1965 has been significantly weakened by the U.S. Supreme Court. The high court, which will soon welcome its first Black woman justice Ketanji Brown Jackson this fall, struck down provisions that required states with a history of racial discrimination to get federal preclearance before approving congressional maps; and, in another decision, lowered the threshold for what is considered racially discriminatory.

Lawson said that despite the gutting of the Voting Rights Act, he believes maps like in Florida can still be defeated in courts due to a provision found in many state constitutions or statutes that outlaw racial gerrymandering and go against what is called “communities of interest.”

“In north Florida, you’re gonna say that all the African Americans in north Florida, they got to go into a Republican district? There’s no consideration at all about communities of interest and compactness of districts and so forth,” said Lawson.

Kyle Strickland, Deputy Director of Race and Democracy at the Roosevelt Institute, told theGrio that the argument for communities of interest is one tool to combat racial gerrymandering.

“There are ways in which we can bind certain communities together so that you’re not seeing all these sorts of cracking and packing of communities, especially communities of color, and so as a result, that is one way to ensure that there is some sense of representation,” said Strickland.

However, he acknowledged its limitations, saying, “communities of interests is an important tool. Unfortunately, it can’t stop the full scope of voter suppression.”

“The issues that we’re running into is that you’re still seeing efforts to work around, and ultimately what I believe is to further gut the Voting Rights Act, with these restrictive provisions, restricted measures,” he added.

The true way to combat racial gerrymandering and other voter suppression tactics, he said, is through “federal action.”

In January, Democrats in the Senate made a concerted effort to pass the federal voting rights legislation that would restore the Voting Rights Act and provide other protections; however, they were unable to stop Republicans’ use of the filibuster rule in the Senate. Additionally, Democratic Senators Joe Manchin and Krysten Sinema refused to join fellow Democrats in changing the filibuster to enact the voting rights reform legislation.

“Schumer and the Democrats tried pretty much every trick that they could when that legislation was being debated,” said Fields of Fair Fight. “This sort of goes to how broken the system is, especially the United States Senate where you have two people who represent such a small portion of the total population of the country get to decide and sort of stifling the progress of hundreds of millions of Americans being able to vote in a fair and free way.”

Strickland of the Roosevelt Institute said that in lieu of federal action, which is unlikely as Democrats face losing their majority in Congress in this year’s midterm elections, there are efforts some states can make on their own through redistricting ballot initiatives.

Ultimately, he said, there needs to be an “all-hands-on-deck approach” in the fight to protect the power of Black and Brown voters.

“We’ve actually seen a lot of successful wins pushing back against these voter restriction measures all across the country, including partisan gerrymandering efforts because some of these gerrymandering tactics have been so extreme that even conservative courts or courts with judges that were Trump appointed are intervening and saying, these are extreme maps and they need to be addressed and actually removing some of these are providing remedies for some of these provisions moving forward,” said Strickland.

“We need to continue to build political power and a lot of grassroots communities are continuing those efforts. We know that folks are continuing to organize and push in spite of the resistance.

He added, “Now, this is no excuse to say that we can somehow out-organize voter suppression, but we’re going to still fight and we’re going to keep trying…but it’s up to other actors, especially federal lawmakers, to step up in lieu of efforts by state legislatures to roll back our rights.”

The post Redrawing of congressional maps like in Florida condemned as ‘intentional’ racial gerrymandering appeared first on TheGrio.