Advocates say legalizing cannabis would restore justice for Blacks, but can Washington get it done? 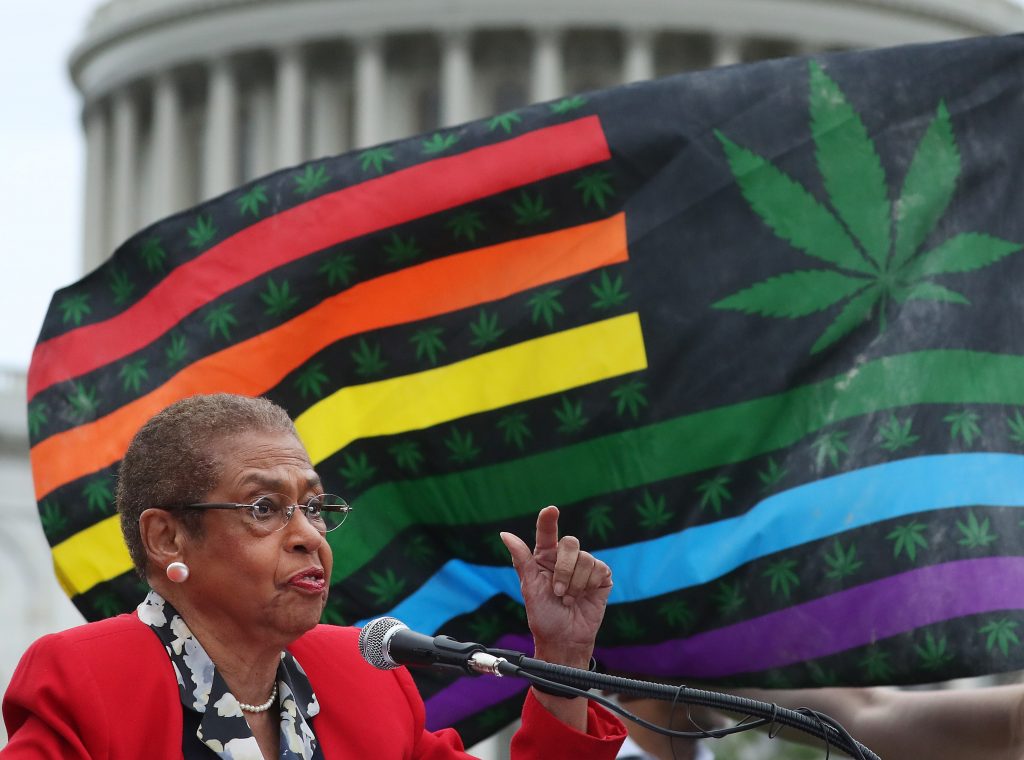 “The president’s endorsement would be huge,” said a member of the Drug Policy Alliance, adding, “I hope he comes to his senses and realizes that this is a civil rights issue.”

Advocates are championing the latest efforts in Congress to legalize cannabis and deschedule it from the list of federal controlled substances, as they argue that doing so would restore the harm caused by marijuana criminalization in Black and Latino communities.

Perez said that “racist policing practices” and racism “embedded in our criminal justice system,” are the cause for the role criminalization has played in the imprisonment of Black and Brown people. Perez noted that marijuana convictions, which Blacks and Latinos disproportionately make up, cause additional, subsequent harm in these communities.

“Non-criminal collateral consequences,” as Perez described it, could include losing one’s home or job, or having challenges accessing education or student loans because of a past drug conviction.

The Drug Policy Alliance and a coalition of advocacy groups are hoping the MORE Act, which was passed earlier this month in the U.S. House of Representatives – mostly across party lines with only three Republican votes – could remedy the harm and racial disparities brought on by the War on Drugs and over-policing in Black and Latino communities. The organization and its partners also played a central role in drafting the bill’s language and lobbied members of Congress for its support.

The MORE Act, which stands for the Marijuana Opportunity Reinvestment and Expungement Act, would decriminalize cannabis and remove it from the list of scheduled substances under the Controlled Substances Act. It also eliminates criminal penalties for an individual who manufactures, distributes, or possesses cannabis.

Whether or not the MORE Act will be passed in the U.S. Senate, where all Democrats and at least 10 Republicans would need to support it, remains to be seen. Perez admits that it will be a “hard sell” in the Senate. The upper chamber of Congress is considering its own bill that Perez said “builds off” of the MORE Act, first passed by the 116th Congress in 2020. The difference between the bills is that the House focuses on decriminalization, while the Senate bill – co-sponsored and led by Majority Leader Chuck Schumer and Senators Cory Booker and Ron Wyden – builds a regulatory and tax framework for the sale and use of cannabis.

Perez said she and advocates are “optimistic” that cannabis legalization can become a reality in the Senate, noting past support for criminal justice reform by Republicans when they worked with Democrats and former President Donald Trump to pass the First Step Act, which provided reforms to federal prisons and sentencing laws and aimed to reduce the population of those incarcerated in federal prisons.

But Republicans aren’t the only potential roadblock to legalizing cannabis. President Joe Biden, as a candidate, signaled support for some level of decriminalization to address the racial inequities caused by marijuana criminalization. However, Biden has previously expressed that while he does support legalization for medicinal purposes, he does not support legalization for adult use.

When asked at a White House press briefing a couple of weeks ago whether President Biden would support the MORE Act, Press Secretary Jen Psaki did not directly say whether or not the bill is something Biden would sign into law.

“The President said during the campaign, our current marijuana laws are not working,” said Psaki. “He agrees that we need to rethink our approach, including to address the racial disparities and systemic inequities in our criminal justice system, broaden research on the effects of marijuana, and support the safe use of marijuana for medical purposes.”

She added, “We look forward to working with Congress to achieve our shared goals, and we’ll continue having discussions with them about this objective.”

As a candidate, Biden pledged to not only decriminalize cannabis but also grant clemency to “everyone” in federal prison and have their criminal records expunged. Advocates and those incarcerated for cannabis convictions have been vocal about the president’s inaction on the issue.

On Wednesday, the unofficial cannabis holiday known as “420,” Psaki was asked when President Biden planned to grant those clemencies. The White House spokesperson said that the president is still reviewing his clemency powers and “continuing to work with Congress.”

“The president continues to believe that no one should be in jail because of drug use,” she said.

Psaki argued that the administration had made some “progress” on its commitments to cannabis reform, noting the Drug Enforcement Administration issued “its first licenses to companies to cultivate marijuana for research purposes after years of delay during the prior administration.”

“This is a key step in promoting research because it broadens the amount and quality of cannabis available for research purposes,” said Psaki.

Perez said President Biden’s support of legislation like the MORE Act would be a “game-changer.”

“The president’s endorsement would be huge,” she said, adding she hopes Biden “comes to his senses and realizes that this is a civil rights issue.”

“This is a racial justice issue. It’s a criminal justice reform issue. These are all things that he says he supports. If that’s the case, he needs to support this. It’s where the public is at, but it’s also the right thing to do.”

The post Advocates say legalizing cannabis would restore justice for Blacks, but can Washington get it done? appeared first on TheGrio.