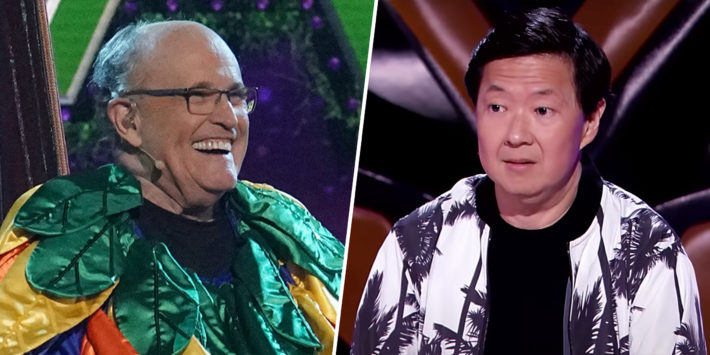 The final group of contestants made their Masked Singer debuts on Wednesday — and the night’s unmasking left some of the judges speechless.

In the latest episode of the sing-and-reveal talent show, the comedian walks offstage after the former mayor of New York, Rudy Giuliani, takes off his Jack in the Box character mask. In the clip, Giuliani sings “Bad to the Bone,” before Jeong takes off and announces “I’m done.”

Ken Jeong walks offstage of #TheMaskedSinger after Rudy Giuliani is revealed to be a contestant on the show:

As Jeong departs, other judges continue singing along and dancing with Giuliani onstage, as Robin Thicke also no longer appears on the judge’s panel. A source previously told People that Thicke followed Jeong to make sure his friend was OK as the actor felt “disrespected and was livid to see Rudy was under the mask which is why he walked off. There’s no way he could hide his feelings.”

“Ken has been incredibly vocal about how the previous administration handled many things but especially COVID-19, and has found a lot of what they’ve said not only wrong but dangerous,” the source said at the time. “To get someone who helped to spread misinformation and call into question the accuracy of our election and democracy to appear on his show was going to set him off.”

Of course, Giuliani was part of a group of lawyers affiliated with former president Donald Trump who spoke at the Republican Party’s headquarters in 2020 after the election, claiming voter fraud. Even on the show, host Nick Cannon mentions the “controversy that surrounds you” to the former mayor, without getting specific.

“I just had a granddaughter Grace and I want her to know that you should try everything, even things that are completely unlike you and unlikely, and I couldn’t think of anything more unlike me and unlikely than this,” he said. “And I enjoy the show, I have for years. Just seemed like it would be fun, I don’t get to have a lot of fun.”