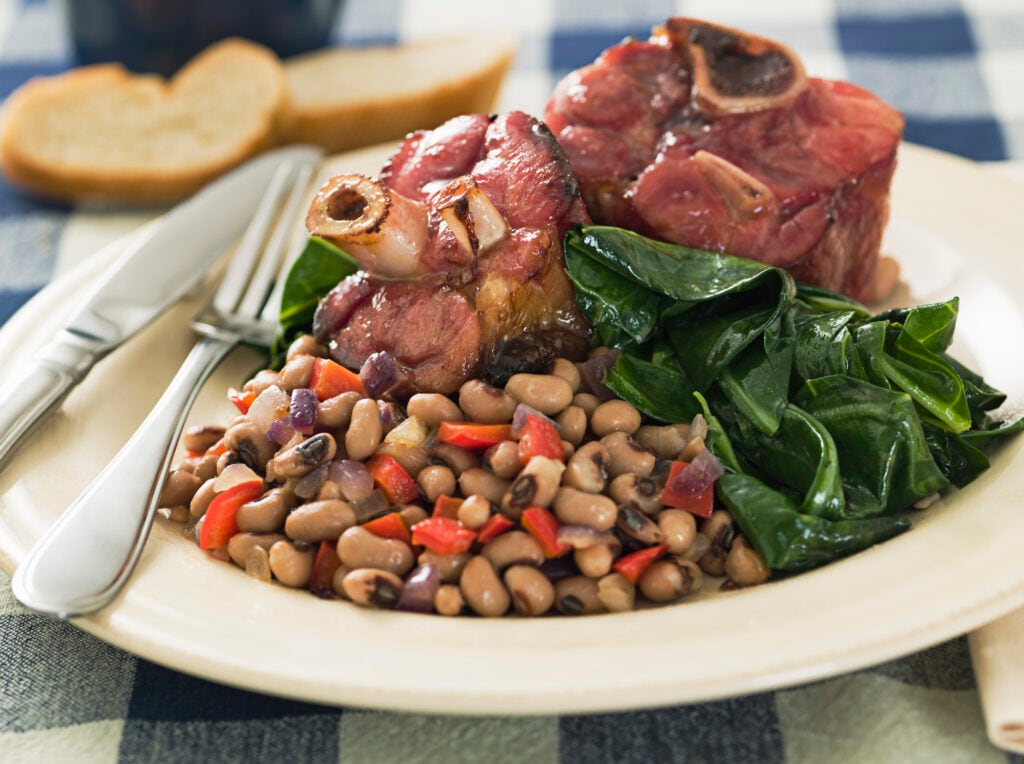 OPINION: Decolonizing Black foodways asks us to unearth and unlearn the racist stereotypes that have shaped our collective knowledge about what constitutes the cuisine of our Black ancestors.

Editor’s note: The following article is an op-ed, and the views expressed are the author’s own. Read more . I like to describe Black veganism as a type of culinary consciousness-raising. In her book Feminism is for Everybody, the incomparable bell hooks described “feminist consciousness raisings” as follows:

“Revolutionary feminist consciousness-raising emphasized the importance of learning about patriarchy as a system of domination, how it became institutionalized and how it is perpetuated and maintained. Understanding the way male domination and sexism were expressed in everyday life created awareness in women of the ways we were victimized, exploited, and, in worse case scenarios, oppressed.”

Similar to feminist consciousness-raising, Black veganism aims to help us understand how and why structural racism became embedded in our food system and how our racist dehumanization is linked to ecological and animal exploitation.

Black veganism accomplishes this consciousness raising in two ways. First, by opting not to consume animal products, Black veganism forces us to explore how white supremacist race-thinking extends beyond Black bodies and is inclusive of nonhuman animals and the biotic community. It is no coincidence that the vast majority of climate change deniers are also the same people who believe that critical race theory is divisive because it causes them to confront the realities of racism in America. Second, Black veganism forces us to examine how the language of animality and “animal characteristics” has been a tool used to justify the oppression of any being who deviates, by species, race or behavior from white Christian norms, where the white heterosexual male is considered the ideal godlike being worthy of all worship and praise.

Learning “how” and “why” our current food system operates the way it does with respect to Black people and, most importantly—how we have come to see our current system as normal —is what academics call decolonizing. Or, as my students describe this process, finding our way back to Wakanda. Decolonizing Black foodways asks us to unearth and unlearn the racist stereotypes that have shaped our collective knowledge about what constitutes the cuisine of our Black ancestors. We don’t have to look farther than the mammy imagery of Aunt Jemima or the stereotypes that supported the Coon Chicken Inn as a successful restaurant chain to see how white assumptions about Black cookery have influenced what Black people believe soul food to be.

Decolonizing also asks us to recognize how these dehumanizing assumptions were used to justify the continued exploitation of Black and other farmworkers of color. Industrial animal agriculture, or factory farming, is among the most harmful agricultural practices in our modern world and Black people disproportionately suffer the consequences of this harm. Whether it is the racism they experience in the factory, the blatant disregard for their humanity, or the ecological harm that these factories cause to their communities and our planet, factory farms have done their best to maintain a plantation-style hierarchy.

As I stated earlier, when I set out to find a way of eating that would allow me to be in solidarity with Black, Indigenous, and other people of color, I did not believe the answer I would come to would be veganism. Interestingly, I began my dietary evolution while I was the senior pastor of a predominantly Black church in Compton, Calif. My dietary preferences never came up while I was being interviewed for the job (why would they?!), and after I had been there only a few weeks, people were already noticing that I was not eating any meat.

One Sunday, when we were having a potluck lunch, I brought citrus collard greens, one of my favorite recipes from Bryant Terry’s Vegan Soul Kitchen. Of course, everyone had to taste the pastor’s greens, and once they recovered from the shock that collard greens can taste good without pork, we had an amazing conversation around why I was a vegetarian (it took me five years to become completely vegan) and how I understood my diet as an act of solidarity with Black, Latinx and other exploited people. Interestingly, I learned that many of the older women in the congregation rarely ate meat, especially red meat and pork, but didn’t call themselves vegetarians because they believed the word was too associated with white dietary culture.

The food on our plates and in our bowls has always informed who we understand ourselves to be and what communities we belong to. This is why I use “Black veganism” rather than “veganism.” Black veganism differs from uncritical adoptions of a vegan diet that dismiss the human suffering caused by industrial animal agriculture and a structurally racist food system. In this way, Black culture and the experiences of Black people are the starting point for my construction of Black veganism. However, the “Blackness” of Black veganism should be understood as an orienting disposition, meaning one does not have to be Black to practice Black veganism. Instead, the “Blackness” of Black veganism signifies a commitment to an anti-oppressive way of being in the world that signifies our commitment to being in solidarity with the exploited and dispossessed peoples of the world.

At its best, the version of Black veganism I suggest in my book—what I describe as “soulfull” eating—avoids the consumption of any animal products but recognizes that in our current food system, veganism is not possible for everyone. These culinary changes would present economic, structural and cultural challenges to some people, and these challenges must be addressed. Food justice activists, community leaders, politicians and especially religious communities ought to commit themselves to creating the economic and environmental conditions that enable all people to practice soulfull eating in its ideal form.

Rather than debating if Black people would (or ought to) practice Black veganism, our collective energies are best served by: 1) working to eliminate the structural barriers that have displaced grocery stores from our communities, 2) raising the minimum wage to a living wage to eliminate poverty so people can afford good food, and 3) creating food sovereign spaces so that we can gain more control over our own food supply. Fannie Lou Hamer’s Freedom Farm Cooperative and The Black Church Food Security Network are excellent examples of what a movement towards Black food sovereignty can look like.

Black veganism aims to disrupt an unjust food system, call attention to the systematic oppression of Black people and make explicit the structural racism embedded in our food system. It aims to build upon the collective wisdom of our ancestors and to create the conditions necessary for future generations to flourish. Black veganism is a way for us to eat, think and participate in activism that prioritizes justice for and solidarity with Black and other dispossessed communities. When we consider the evolution of Black foodways and Black culinary traditions, I believe that Black folks may be among the most psychologically equipped and culinarily capable of making this dietary change.

Rev. Dr. Christopher Carter’s teaching, research and activist interests are in Black, womanist and environmental ethics, with a particular focus on race, food, and nonhuman animals. Currently he is an assistant professor of theology at the University of San Diego, a Faith in Food Fellow at Farm Forward, and lead pastor of The Loft in Westwood, Calif.

The post How Black veganism can decolonize soul food appeared first on TheGrio.