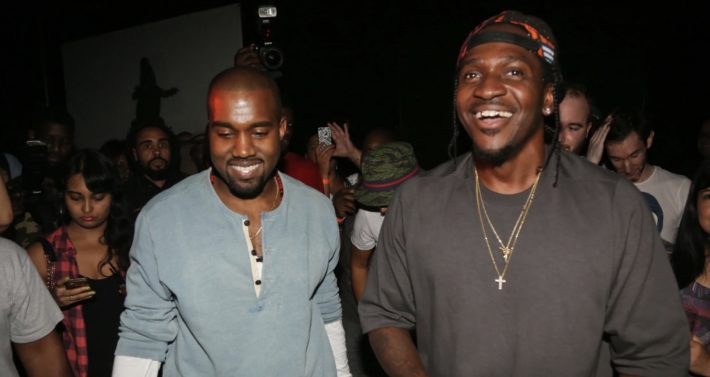 While most of Kanye West’s new music these days is locked behind his Stem Player, a couple of streaming-friendly Ye tracks surfaced today via Pusha T’s new album, It’s Almost Dry: He features on “Dreamin Of The Past” and “Rock N Roll.”

In addition to contributing half of the 12-track album’s production, the artist formerly known as Kanye West also makes a pair of guest appearances on the tracks “Dreamin of the Past” and “Rock N Roll,” respectively. The latter, as previously reported, is said by fellow featured collaborator Kid Cudi to mark the “last song” fans will ever hear him on with Ye.

Lyrically, these features see Ye addressing issues of the family variety. For example, “Dreamin of the Past”—which takes its title from John Lennon’s “Jealous Guy” by way of a sample of the Donny Hathaway version of the song—first includes a reflection from Ye on having become “a minister” in his prime before moving into a Fresh Prince of Bel-Air reference that eventually closes with some family-centered ponderings:

“Born in the manger, the son of a stranger/When daddy’s not home, the family’s in danger”
“Rock N Roll” sees Ye revisiting the topic, this time briefly reflecting on not wanting to argue when picking up his children:

From there, Ye mentions being “over the edge” to the point of not knowing “if I’m falling or flying.” He also references his late mother, Donda:

“Love my mama but sometimes dad was right/Take his hand, hold on with all of your might”
Publicly, Ye has remained silent after being reported to have been suspended from Instagram. In January, Ye mentioned Pete Davidson in the lyrics of his and The Game’s “Eazy” collab (and later featured a depiction of the SNL star in the track’s video). Davidson, of course, is currently linked with Kim Kardashian.

Ye’s most recent album, Donda 2, was rolled out as a Stem Player exclusive in February. Pusha-T’s It’s Almost Dry is out now and also features Jay-Z, Lil Uzi Vert, and more.

Listen to “Dreamin Of The Past” and “Rock N Roll” below.