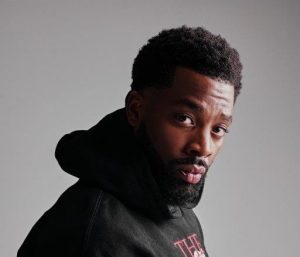 One of the most familiar faces in network primetime television is LaRoyce Hawkins. A native of Chicago-neighboring Harvey, Illinois, Hawkins is best known for his stellar performance of Officer Kevin Atwater on the long-running series Chicago P.D. Recently, Hawkins’s roles on screen have expanded, showcasing the depths of his talent through comedic performances in South Side on HBO Max and the BET+ film North of the 10.

Off-screen, Hawkins is an integral part of the community efforts in his hometown. His philanthropic spirit spawned Be Powerful, a collective that is dedicated to providing opportunities and services that may have not been present.

Taking time with The Source, Hawkins details the growth in his acting career, how Be Powerful is making an impact, and more.

How does it feel to now be wrapping up season 9 of Chicago PD?
LaRoyce Hawkins: It honestly doesn’t feel real yet. I’m very grateful but also trying to be as present and aware of this moment as possible. Whenever the wheels fall off of this thing, I think then I’ll have a birds-eye perspective on my feelings. But right now, I’m just grateful to still be working at a high level and feel extremely blessed.

What growth have you seen in yourself and Kevin Atwater over the years?
We’ve helped each other grow. I’ve seen a focus and a consistency in LaRoyce lately that directly affects Atwater’s focus and consistency. Our efforts in how hard we work and the balance that we both bring to our jobs are inextricably bound. As one of us grows, so does the other, and I’ve seen us both be more committed to our assignments. And with every assignment, I see a significantly more developed artist in LaRoyce Hawkins and a seasoned officer in Kevin Atwater.

What has been your favorite part of this season?
My favorite part of this season has been the moments that the camera doesn’t see. I’ve been doing my best this year to stay connected with the cast and crew off-set. Sometimes I come to work a little early so that I can get some time in with the crew, and sometimes I stay later. I like to come in on off days and pick up what the director is putting down. This season, the cast has been really good at hanging with each other offset, and those are some of the moments I appreciate the most.

We see your expansion to other productions, how do you balance the various roles?
The best way to balance roles is to really identify what part of your imagination you’re tapping into. I’m grateful to be able to play characters that are on different sides of the spectrum. I’m in my “cops and robbers” bag when I’m playing Atwater, and I get to lean into –excuse my french– a “recovering fuck boy” type of character in “South Side” on HBO Max. And for my role in “North of the 10” on BET+, I had to tap into my high fashion bag, which was a mix of Diddy and Tom Ford. So with every role, I just identify where they come from and what part of myself I need to activate and have fun with.

You are on TV right now with a tremendous wave of Black talent. What does that mean for you and how often do you get to check out other performances?
It means a lot to me, and I’m honored to be in that pool of Black talent because I also know how it feels to be the only brother in the pool. I’ve been on P.D. long enough to watch other shows come and go, so building relationships with other Black talent coming into the business grew to be important to me–-specifically, the Black male leads that represent Chicago.  A lot of us are filming here in Chicago. I am inspired by my brother Kris Lofton, who is going crazy on Power Book IV: Force, and then you have Ser’Darius Blain applying pressure over there on The Big Leap. I also get excited about the next wave of new talent here in the city like Bentley Green and Tosin Cole on 61st Street. We’re all very supportive of each other’s shows and careers, and I think that’s kind of rare.

I’m familiar with how you got onto Chicago P.D. – now that you are a go-to face on TV, how has the casting process shifted?
It’s definitely shifted. I get a lot more offers than I used to, and I’m able to take a lot more control of my opportunity process. There’s a new language that I’ve adopted that doesn’t even call an audition an “audition” anymore. Now, they’re just “opportunities.” Opportunities to grow. I’ve also picked up an acting class during the season that’s allowed me to reconnect to that childlike imagination. Hopefully, this allows me to activate my bag as the opportunities come.

I know you are giving back to the city and at one point I remember an initiative in Harvey – what are the current ways that you are looking to assist the community?
Be Powerful is my corporation, and Hood Development is the concept (spearheaded by my big brother) that circulates light through my hometown of Harvey and surrounding areas. I like to leverage the relationships and resources from the brands I collaborate with. For example, a couple years ago, as the Voice of the Chicago White Sox, we were able to provide Harvey’s Little League with new jerseys and equipment.

Whether it’s beautifying landmarks in the neighborhood, creating family sports experiences, or selling merchandise on laroycehawkins.com, I try to find creative ways to pour into where I’m from.

What attracted you to giving back to the community in those ways?
My grandfather, Grandpa John was always a strong example of service and humility. I watched him be a pillar in the Harvey community and be a resource of wisdom for everybody from the principal of the high school to the mayor of the city. My grandfather’s always been something like an advisor, and I watched him give his time differently over time. As he got older, he only had time for quick phone calls from his dining room table, but when he was a little younger, he’d be out there with us on the streets going from door to door trying to get referendums passed for the school district.

His influence is why I am passionate about hosting charitable functions and aggressively mentoring young minds that look like me.

What do you think needs to be highlighted about the communities and populations you serve through the community efforts that you think are often missed or overshadowed?
There’s a lot of good news that gets overshadowed. I think we have to be more innovative in how we throw good energy around.

We have to be innovative in not just throwing more positivity around, but also highlighting the positivity we already have. I think we’ve just become very conditioned to consider the news to only be bad when good news should also be considered–and that’s how we find balance in what we consume. There are a lot of cities, like Harvey, that has a rich history. So part of Be Powerful’s mission is to highlight that history so it guides our future.

I think it’s dope that we are in this live music venue for this meetup – especially with your background in music. It’s a part of you and your artistry. What have you been working on in music and how soon can
people hear it?
My team and I respect the music industry so much that we are taking our time to find ways to storytell with the music effectively. We’ve made a lot of music already, so I’m doing my best to compartmentalize where that music belongs. But soon for sure…

How complex is it in balancing both of those art forms?
Naturally, I’m capable of storytelling in a few different ways. However, I can’t forget that acting “brought me to the prom.” The balance is finding creative ways to allow the gifts to collaborate and not compete. Music allows me to connect closer to whatever story I’m trying to tell, and that’s grown to be a part of how I work.

The post Exclusive: LaRoyce Hawkins Talks His Growth in Acting and Giving Back to His Hometown Through ‘Be Powerful’ appeared first on The Source.