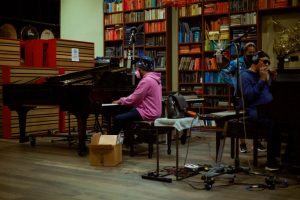 On his new track, “Be Like Water,” PJ Morton brings together two of his biggest musical heroes: Stevie Wonder and Nas. The new track will be featured on his upcoming album, Watch The Sun, released on April 29.

The song, which blends strings, synths, and shifting tempos to wash away the worries, is a message to remain fluid and adaptive to life’s trials and changes.

“‘Be Like Water’ was definitely a phrase I had heard before,” says PJ Morton. “Bruce Lee made it famous of course, but it didn’t fully connect with me until we were all shut down and I had to pivot in my life like we all had to. After I finished writing it I could only hear Nas’ voice on it. For him to actually get on it blew my mind. Then when Stevie Wonder agreed to be on it and to learn that Nas had always wanted to work with Stevie, it was beyond my wildest dreams!”

You can hear the new single below.

The post PJ Morton Releases New “Be Like Water” Single With Nas and Stevie Wonder appeared first on The Source.