The Kid LAROI Returns with First Single of 2022 “Thousand Miles” 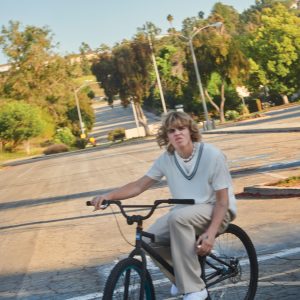 The Kid LAROI releases “Thousand Miles,” his much-awaited first single of the year. The new hit is complemented by Christian Breslauer’s blockbuster music video. Andrew Watt and Louis Bell, two of LAROI’s most powerful co-producers, are on board.

In the video, which also stars Katarina Deme, LAROI does something he’s never done before: he confronts himself. As LAROI encounters his one true opponent, “Thousand Miles” takes on new significance thanks to the accompanying video, which is daring, poetic, and dramatic.

“It was just [Andrew] Watt just had this guitar idea that he had made and he just pulled it up and I just started ripping it at his house on the mic,” LAROI said of the single to Zane Lowe on Apple Music 1. “And we just put it together and then we went and took it to Lou to go in on the production with Watt. And yeah, I mean, the rest is… I mean, yeah, we kind of made that song. I loved it. At the time, I was like, oh my gosh, I love this song so much.

“I just put it up and I guess the fans just really… They liked it. And I guess, I don’t know. Let’s just give it to them. it’s been like 10 months since I dropped music, and 10 months in internet time is like 10 years.”

You can hear the single and see the video below

The post The Kid LAROI Returns with First Single of 2022 “Thousand Miles” appeared first on The Source.