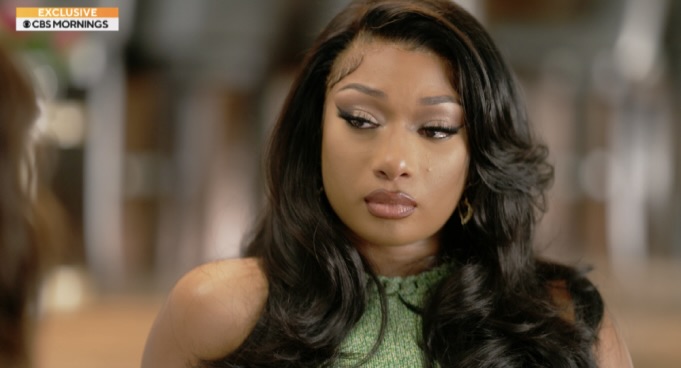 This summer will mark two years since Megan Thee Stallion was shot in the foot. The incident resulted in Tory Lanez being charged with one felony count each of assault with a semiautomatic firearm and carrying a loaded, unregistered firearm in a vehicle. Tory has repeatedly denied being the one who shot Megan, but testimony from an LAPD detective revealed that he allegedly apologized for shooting Megan in the foot afterward. Court proceedings for the case are still underway, with Tory’s arrest for violating Megan’s protective order against him being the most recent update in the matter. As that continues, Megan took a moment to sit down with Gayle King for an interview on CBS.

Gayle King talks to Megan Thee Stallion about what happened between her & Tory Lanez ? thoughts ?? pic.twitter.com/VsKnF98WzP

The full interview will air on Monday morning, but in a clip that was shared on Sunday, Megan gives an emotional account of what happened that summer night in 2020. “It was an argument because I ready to go, and everybody else wasn’t ready to go,” Megan says at the beginning of the clip. “But that’s like normal friend stuff, we fuss about silly stuff all the time. I never put my hands on anybody, I never raised my voice too loud, like this was one of them times where it’s like it shouldn’t have got this crazy.” Megan then went on to recall the moment she was shot in the foot.

“So I get out of the car, and everything just happened so fast. All I hear this man screaming is, ‘dance, b*tch,’ and he starts shooting, and I’m just like ‘oh my God…’ like he shot a couple of times,” Megan added. She then notes that Tory was “standing up over the window shooting” at her. Megan continued, “I didn’t even want to move. I didn’t want to move too quick cause I’m like, ‘oh my God if I take the wrong step, I don’t know if he’ll shoot something that’s super important and I don’t know if he could shoot me and kill me.”

Megan concluded the clip by saying, “I was really scared because I had never been shot at before.”

You can watch the full clip in the video above and stay tuned for Megan’s full interview with Gayle which arrives tomorrow morning.

The post Megan Thee Stallion Gives An Emotional Account Of The Night That Tory Lanez Shot Her In The Foot [Video] appeared first on LOVEBSCOTT.