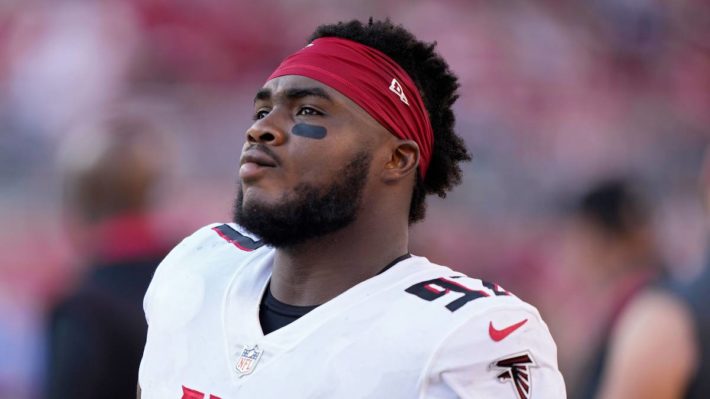 Atlanta Falcons star defensive end Grady Jarrett says he wasn’t allowed to eat at a Buckhead restaurant due to what he was wearing.

According to WXIA, the Pro Bowler said the treatment he received from Buckhead restaurant Le Bilboquet last Wednesday (April 20) was rooted in ignorance.

“I like to dress up. I like to look good,” Jarrett told the news station at his Buckhead home Thursday. “So I dressed up and I was looking good.

“I was taken aback for real,” he added.

Jarrett said he was wearing a $7,000 tailor-made casual Gucci garment when he was evicted from the restaurant. He described his unhappiness with the treatment in an Instagram post he made after the incident.

In the picture post, Jarrett is wearing a bright green Gucci suit, Offshore watch, and “iced double tennis chain with an Ankh.”

“Was about to have dinner at @lebilboquetatlanta was getting seated until the manager walks out, I believe he said his name was Chad, tells me I’m not dressed properly and they won’t sit me n my lady.. unfortunate because we just came last week and had a great experience with great waiters but today I guess the manager had other plans,” he captioned the post.

Jarrett continued by describing how his attire was very luxurious while others at the restaurant, who were wearing far shabbier clothes, were allowed to remain dining.

“Not sure if I know how my dress is offensive, maybe it’s the Gucci suit , the Bussdown AP Offshore , the iced double tennis chain w an Ankh and the fact that I pulled up in my 500k RR and they felt I wasn’t fit to bless their restaurant for dinner..” he wrote. “I guess the other people rocking Nike sweat suits and t shirts that were already seated (as you can see in the background of the picture) n enjoying dinner were no problem.. unfortunate but I’m not going for it.. This not even my style I’m a cool guy you should ask around.. Do better @lebilboquetatlanta.”

The restaurant’s dress code says no athletic attire, which Jarrett said his garment was not.

“You ever see someone working (out) in a full Gucci suit?” Garrett told WXIA. “I’m an athlete.”

The alleged denial of entry is nothing new for Le Bilboquet. The restaurant famously turned away NBA legend Dominique Wilkins just 11 months ago, also claiming he was not dressed “fashionably enough.” At the time the establishment said it would loosen its dress code policy, however it doesn’t look like that’s happening, at least in Garrett’s situation.