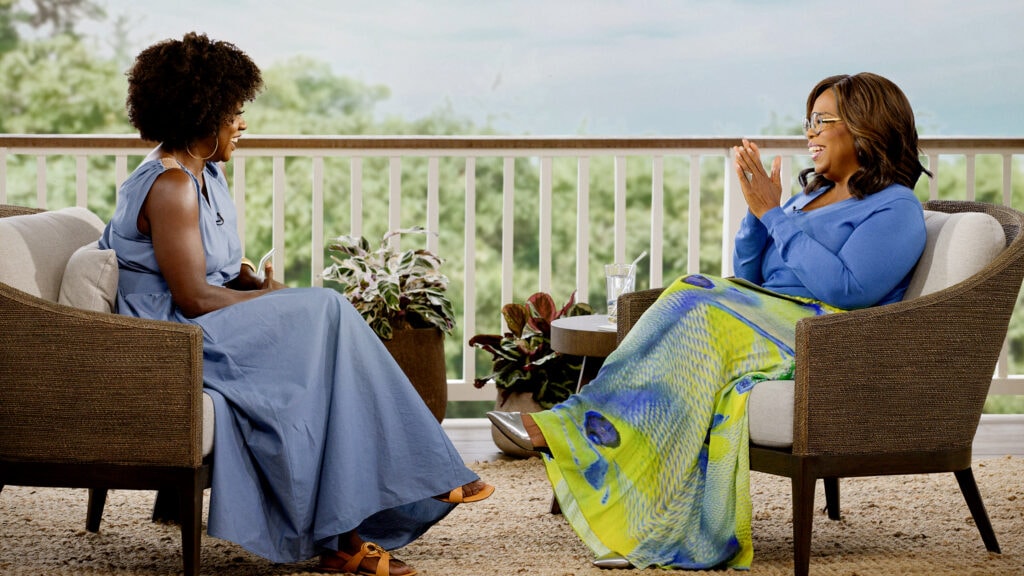 The esteemed actress was interviewed by Winfrey to celebrate her new book, ‘Finding Me: A Memoir’

Academy Award winner Viola Davis sat down with Oprah Winfrey for an exclusive interview for Netflix, following the release of her highly-anticipated memoir, “Finding Me” an Oprah Book Club selection.

As one of the most acclaimed Black actresses in history, Davis is an icon who is a Grammy away from coveted EGOT status (winners of at least one Emmy, Grammy, Oscar, and Tony award) and has made her mark with a collection of memorable performances.

Yet, there is so much more to her story, and through her memoir, as well as her sit-down with Winfrey, Davis is letting us all in on her journey, her accomplished career, and what’s next. Here are five takeaways from the special.

At the top of the special, Winfrey asks the actress a simple question — ‘Why now?’ Davis explains that once she reached a certain level of fame and “success” in the entertainment industry, she always thought she would be “like Cinderella” and live the rest of her life “in joy and peace.” She tells Winfrey, however, “that didn’t happen.”

She said that by going back to the beginning of her story, she knew she would be able to work through and understand where she is now. “What it emphasizes is you go back to the purest form of Viola, and you find out she helps you define what it is that you would call home.”

Davis shed light on her difficult childhood, including intense bullying. Davis remembers being an 8-year-old girl in “third grade who would wait at the back door during dismissal and as soon as that bell rang, I ran over people.” She said she would run home because she knew the same group of boys would chase her, calling her the N-word, and throwing “anything they could find” to hit her.

“That really is the memory that defined me,” she explained. “What I always say is that I thought I was really slick, I was tough…but I always say that I never stopped running, my feet just stopped moving. That as I went through my life, as much as I tried to put on that mask of bravery, of confidence, of being that sort of boss woman that people talk about…but inside, absolutely was the damaged little girl that I left in Central Falls that really, really believed that she was ugly, that she was not enough. That’s what defines me more than anything else.”

Oprah summarizes, “Viola’s parents were challenged by racism, poverty, addiction, and abuse but stayed married for 48 years until Dan Davis’ death at age 70. It was just a life of abject poverty. A life of deprivation.”

Davis was raised with her five siblings and parents in Central Falls, Rhode Island. “We knew we were poor…always being hungry in cold Rhode Island. Plumbing never working…never having a phone.” She even shared how one of her first apartments was infested with rats.

In her memoir, the How to Get Away With Murder actress described her father as “strict and violent” but also stated that he was “the first man who loved me.”

She also opened up about a seminal, sad moment where, when her father was abusing her mother, Davis stood between them.”My fear had taken over and I just remember screaming, ‘stop it, just stop it!’”

She likened it to coming face-to-face with a giant.

“This is my father,” she explained. “Here I was doing the unnatural thing, which was telling a parent to stop doing something that he should not have been doing. Everybody, especially at 14, you need a parent…for me it cost me something to tell a parent, ‘don’t do that…you’re going to kill my mom.”

One of the most impactful moments of the special is when Davis imparts some advice to Winfrey, something she says she tells people “all the time.”

“You find people in your life who love you,” Davis explained. “And what those people do because they love you, and they love all of you even your flaws, is they give you permission to be able to love yourself.”

Her dreams of being an actor, she explains, were bigger than her fears. “I needed a dream like I needed food and water,” she explained. “That dream wasn’t just a goal, that dream was my way out, my sort of salvation.”

Davis, now 56, also opened up about imposter syndrome, something she struggled with as she launched her stage career as an actress. While the applause would feel good at first, she explained that it only increased the feelings of unworthiness.

“I feel like this book Is a gift to others,” she said, adding that she hopes it helps other people on their journey to self-love.

Oprah + Viola: A Netflix Special Event is available to stream now on Netflix.

The post The 5 biggest takeaways from Oprah’s sit-down with Viola Davis appeared first on TheGrio.