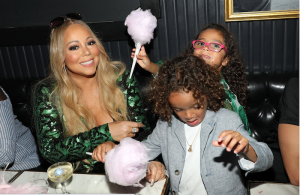 Time flies when you’re having as much fun (or as busy) as Mariah Carey apparently! The superstar took to Instagram over the weekend to wish her twins, Moroccan and Monroe, a very special 11th birthday and to share some new (and old pics).

On Saturday, Carey shared a current picture of herself and her twins on a boat with two of the family’s dogs along with a caption that read: “Happy 11th birthday to the two greatest blessings of my life. Roc and Roe…Always be my babies! …DEMKIDS!!!! I LOVE YOU FOREVER! Mommy” (followed by a heart emoji). The next picture in the post was a picture of the twins as babies.

Later that day, she shared a video collage of herself and the twins over the years to her song “Supernatural.”

The twins (and their pets) have made several other appearances on Carey’s social media, most notably during the holidays as she shared various renditions of her classic holiday hit, “All I Want for Christmas is You.”

Carey shares the twins with her ex-husband, Nick Cannon. She is reportedly working on multiple projects following her hit of the “Big Energy” remix with Latto.