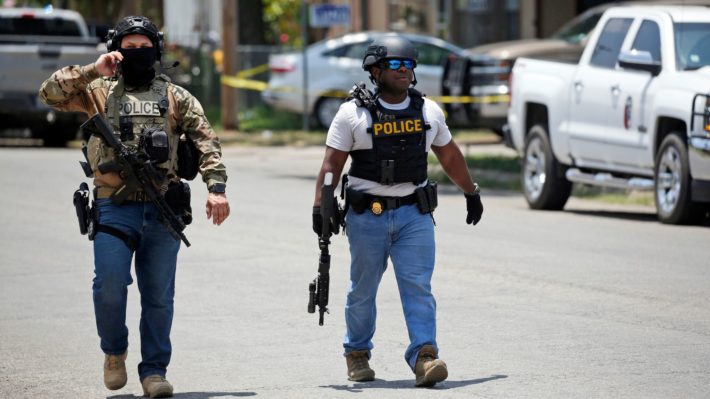 The 18-year-old gunman who killed 21 people at an elementary school in Uvalde, Texas, was not confronted by police before he entered the school, a Texas law enforcement official said Thursday, contradicting earlier comments from authorities and raising further questions about the police response to the massacre.

Authorities say 18-year-old Salvador Ramos was at Robb Elementary School for up to an hour before law enforcement forced their way into a classroom and shot and killed him. Steven McCraw (Texas Department of Public Safety Director) told CNN, “It’s going to be within, like 40 minutes or something, [within] an hour.”

Rep. Tony Gonzales shared that a standoff involving Ramos and officers lasted about 30 minutes after Ramos shot students and teachers.

In a press conference from yesterday (May 26), Victor Escalon (Regional Director for the Texas Department of Public Safety) said that law enforcement used that lull to evacuate the rest of the building. Escalon also mentioned that officers used that time to call for backup.

Raul Ortiz, Chief of the US Border Patrol, shared that Border Patrol tactical team members, a search and rescue responder and other agents joined local police to form a team that went after the gunman.

Ortiz praised their efforts, saying, “They didn’t hesitate. They came up with a plan. They entered that classroom and they took care of the situation as quickly as they possibly could.”

Officials described Ramos as a local high school dropout without any known mental health issues and no criminal record. He had recently turned 18 and purchased two AR-15-style assault rifles and ammunition for his birthday.

Ramos’ family said they did not know of his plans. His grandfather, Rolando Reyes, said, “If I had known, I would have reported him.”

The post Texas Gunman Was in Elementary School For Up to an Hour Before Police Killed Him [Video] appeared first on LOVEBSCOTT.

SPEAKING OUT: ‘McDonald’s Baby Mama’ Admits Viral Video Was NOT Staged, Explains WHY She Exposed Her Baby Daddy