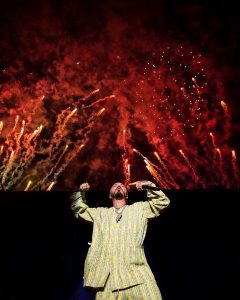 Suenos Festival proved over its first weekend that it has the potential to become a Chicago tradition and a premier destination for Latin talent for years to come.

The final day of the first-ever Suenos featured dazzling stars, gorgeous weather, and impeccable moods, with twelve hours of nonstop Latin and Reggaeton music. J Balvin closed up the night with a fantastic performance, making the most of his one and only appearance in the United States in 2022. Wisin Y Yandel, performing as part of their last tour (“La ltima Misión”), brought down the house with hits from their decades-long career. Ascendant superstars like Jhayco and Sech exhibited their talent and musicianship, Fuerza Regida provided regional Mexican flair, budding stars like Lyanno and La Gabi illustrated why they were next up, and Chicago-based DJ Miriam opened the event for her hometown. DJ Fredy Fresco, the official Sueos DJ, spun hits from all eras of Reggaeton between shows, bringing the audience together under the flag of Perreo.

Suenos Music Festival, located in Grant Park in the center of downtown Chicago, is celebrating the success of its inaugural event and looking forward to many more fantastic years in the Windy City, which has one of the largest Hispanic populations in the country.

You can see images from the event below.