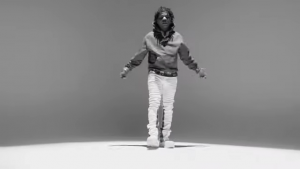 Rylo Rodriguez may be from the country town of Mobile, Alabama, but his story is felt in ghettos worldwide. It’s no secrete why Lil Baby added him to Four Pockets Full label. Rylo Rodriguez speaks for the streets but from the soul, and it’s evident in the new video “Benz Truck.”

In the video for “Benz Truck,” Rylo only needed white studio space and b roll footage. Over a soft guitar-driven production, he used authentic next-level lyricism to one of his many hood tales. True, he’s rapping on “Benz Truck,” but his sound is so intimate that it comes off as poetry. Southern folk rap poetry.

“Tell him get up off that block, go invest in him some stocks
Under the house, I hid the street sweeper, we ain’t need no mop
Imagine tryna feed people who don’t got an appetite
The ones I love left me, I pray one day, we gon’ make it right”

It’s uncertain if the 4PF artist has a project coming out, but “Benz Truck” is only the second single this year from Rylo Rodriguez. Earlier this year, he released “Set Me Free.”

Watch his new video for “Benz Truck” below.