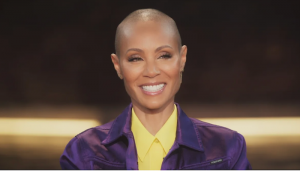 It’s been a few months since the “slap heard around the world,” and Jada Pinkett-Smith and her husband Will Smith have been fairly quiet about the incident until now. On Wednesday’s episode of her web series “Red Table Talk,” Pinkett-Smith addressed some of the controversy during an episode that centered around alopecia.

Pinkett-Smith opened by saying, “this is an important Red Table Talk on alopecia. Considering what I’ve been through with my own health and what happened at the Oscars, thousands have reached out to me with their stories. I’m using this moment to give our alopecia family an opportunity to talk about what it’s like to have this condition and to inform people about what alopecia actually is. Now about Oscar night, my deepest hope is that these two intelligent ,capable man have an opportunity to heal, talk this out, and reconcile. With the state of the world today, we need them both and we all actually need one another more than ever. Until then Will and I are continuing to do what we have done for the last 28 years- and that is to figure out this thing called life together.”

Pinkett-Smith then interviewed a variety of people who suffer from alopecia, letting them share their stories and struggles, including the parents of a 12-year-old girl who took her own life after being bullied for her condition.

She also used the show to educate people on alopecia including explaining how there are many kinds of alopecia. A doctor explained how most alopecia is an autoimmune disease that affects millions of people across all backgrounds.

She did not address the slap any further throughout the show.

The full episode can be viewed on Facebook Watch: https://www.facebook.com/redtabletalk/videos/jada-goes-bald/380308703633244/.