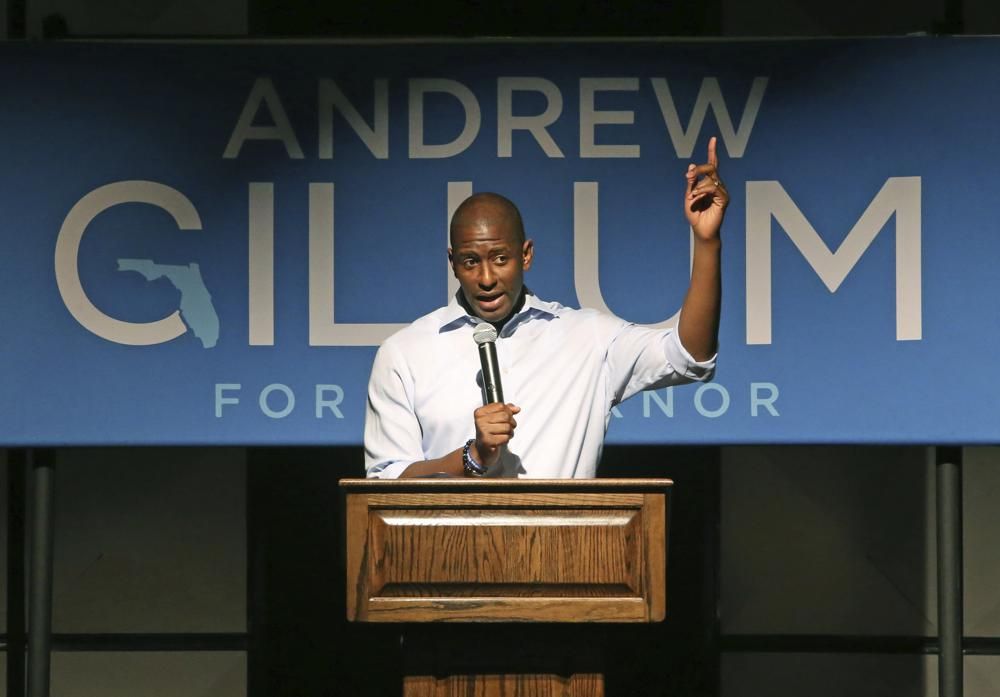 From running to governor to the feds banging on your door. Andrew Gillum’s fall from grace has been one for the history books. At one point in time, the dynamic speaker was regarded as Florida’s rising Democratic star. Now, not so much.

The U.S. Attorney’s Office for the Northern District of Florida named Andrew Gillum, 42, and his longtime advisor Sharon Lettman-Hicks in a 21-count indictment. They have surrendered to the FBI.

The indictment alleges that between 2016 and 2019, Andrew – who narrowly lost the 2018 governor’s race to Republican governor Ron DeSantis – and Sharon – a candidate for a state House seat – conspired to commit wire fraud by unlawfully soliciting and obtaining funds from various entities and individuals “through false and fraudulent promises and representations that the funds would be used for a legitimate purpose,” the Justice Department said in a news release.

The government alleges Andrew – the former mayor of Tallahassee – and Sharon diverted some of the money to a company controlled by Lettman-Hicks, who fraudulently disguised the funds as payroll payments to Andrew.

In a written statement, Andrew Gillum proclaimed his innocence.

“I have spent the last 20 years of my life in public service and continue to fight for the people,” Gillum said. “Every campaign I’ve run has been done with integrity. Make no mistake that this case is not legal, it is political. Throughout my career I have always stood up for the people of Florida and have spoken truth to power. There’s been a target on my back ever since I was the mayor of Tallahassee. They found nothing then, and I have full confidence that my legal team will prove my innocence now.”

Andrew and Sharon are scheduled to have their first court appearance at 2pm EST at the U.S. Courthouse in Tallahassee today.

NBC News breaks down how the Feds’ investigation led to an indictment:

According to the indictment, the FBI began to sniff out the alleged scheme in 2016, when Gillum was mayor and undercover agents investigating corruption in the city were steered to him. The two are alleged to have used his position as mayor, as a progressive activist and then as a top candidate for governor to skim money from a variety of individual donors and nonprofit groups, fraudulently pretending to perform voter outreach or to fight for local government rights while pocketing the cash — even after his campaign for governor ended in 2018.

Gillum’s decision to resign from his job at the liberal group People for the American Way in early 2017 was particularly stressful, the indictment said, because he couldn’t absorb the loss of the $122,500 annual salary. According to the indictment, he and Lettman-Hicks then arranged for more money to flow through Lettman-Hicks’ communications business, P&P Communications, which paid him as an employee or as a contractor.

Gillum had been under federal investigation for years, starting with his time as mayor of Tallahassee, when he accepted freebies from lobbyists and special interests — including a free New York Harbor boat ride and tickets in New York to the musical “Hamilton,” which were supplied by an undercover FBI agent posing as a corrupt developer with a company called Southern Pines. Gillum, who wasn’t charged in that scheme, agreed to pay a $5,000 state ethics fine for improperly accepting gifts.

At one point, one of the undercover FBI agents offered to contribute money to Gillum surreptitiously on the condition that Southern Pines get favorable consideration in City Hall, the indictment said. Gillum, unaware that he and an unnamed associate were talking to an undercover agent, later lied in June 2017 to the FBI by saying he had cut off contact with “Southern Pines,” according to the indictment.

The FBI investigation and the revelations of his hobnobbing with lobbyists helped doom his campaign against DeSantis, who repeatedly described Gillum as “corrupt” and defeated him by less than half a percentage point.

The federal indictment is the latest scandal involving the former Tallahassee mayor. In March 2020, Andrew was discovered by police at the Mondrian South Beach hotel in a room that had bags of possible methamphetamine present. Another man was found in the hotel room who was suspected of overdosing on crystal meth.

Following the backlash, Andrew apologized and decided to withdraw from the public as a political leader and a paid CNN commentator to get himself together. He revealed he was abusing alcohol to cope with his loss to DeSantis.