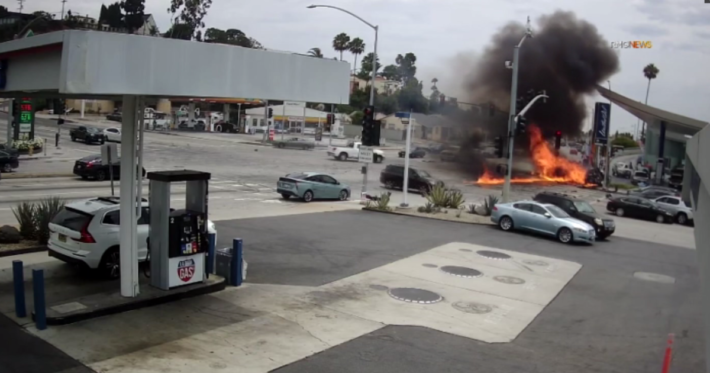 At least five people were killed, including a baby and pregnant woman, as several others were injured after a car collided with other vehicles in a fiery explosion caught on video at a Los Angeles intersection.

Content warning: This article contains footage some may find disturbing.

The Los Angeles County Fire Department first said Thursday afternoon that officials had been dispatched to what they initially described as a “multiple casualty incident” in Windsor Hills. Per a report from the Associated Press, the driver in question—who survived the crash but was hospitalized with severe injuries—slammed into multiple other cars at the busy intersection after running a red light shortly after 1:30 p.m. local time.

In a subsequent update, the LACOFD, which noted the crash remained under “active investigation” as of Thursday evening, said five people were dead at the scene and another nine were injured. Of those injuries, eight were taken to nearby hospitals for treatment.

**UPDATE**#LACoFD assessed and transported 14 pt: 5 D.O.A.’s, and 9 injured, 8 of which were transported to area hospitals. Incident is still under active investigation. #LaBreaIC pic.twitter.com/MkKDBb5L6S

At a press conference on Thursday evening, a spokesperson with the California Highway Patrol fielded questions about the status of the investigation, with the ultimate takeaway being that authorities were still largely relying on preliminary info at the time.

As for additional details on the driver, the rep was able to confirm only that “a 40-year-old female” was behind the wheel. Pushed for insight on how fast, exactly, the woman was driving when she ran the stop light, the rep noted that she was indeed driving at “a high rate of speed,” although the exact speed remained unknown.

“It’s very obvious from the video everyone’s seen at this point that it was a tremendous, high rate of speed,” he said. “Obviously we weren’t out here to necessarily have a radar or anything out but we can say it was a high rate of speed, at minimum at least 50 to 60 miles an hour and/or higher.”

A pregnant woman and an infant have been confirmed to have been among those who were killed as a result of the crash. While an updated statement from CHP on Thursday night noted that the death count had been raised to six following the discovery of another body inside one of the burned vehicles, NBC Los Angeles’ report points out that this number from law enforcement officials counted the fetus.