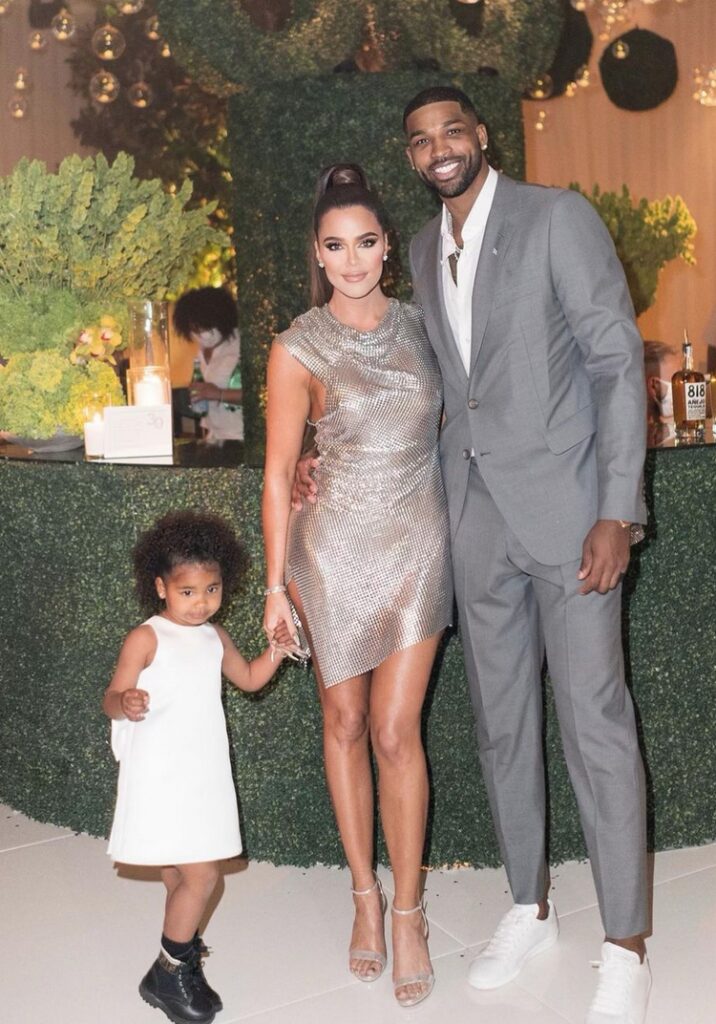 Tristan Thompson is a dad again! The NBA free agent and his baby mama Khloé Kardashian just welcomed a baby boy via surrogate. Deets inside….

Tristan Thompson just became a dad for the fourth time!

The 31-year-old NBA free agent and his ex-Khloé Kardashian have welcomed their second child together, a baby boy. A rep for the 38-year-old reality star revealed their son was born via surrogate and Khloé has not yet decided on a name for her son.

The baby will join their 4-year-old daughter True Thompson, making her a big sister for the second time. The new baby also has two big brothers, 8-month-old Theo Thompson (whom Tristan shares with Maralee Nichols) and 5-year-old Prince Thompson (whom he shares with his ex-Jordan Craig).

Last month, it was revealed Tristan and Khloe were having a child together, which was a shock to their fans since he cheated on her and fathered a baby with another woman. After news hit about the new baby, Khloe issued a statement confirming the baby by surrogate was conceived in November 2021, prior to finding out about Tristan’s other baby who was born a month later (December 2021).

Just before Tristan and Khloe welcomed now 4-year-old True Thompson, Tristan was caught in 4K cheating on Khloe at a restaurant and at clubs with multiple women.  It was such a scandal that it sent Khloe into early labor.

Shortly after Khloe gave birth, Tristan’s first baby’s mother, Jordan Craig, issued court documents saying Tristan was a deadbeat and hadn’t seen their son, Prince, in about a year. We noticed that Tristan has posted at least a couple pics with little Prince since then………

After True was born, Khloé seemed to soften to the idea of taking him back.  And just as they were going public with being back together, he was in a scandal with longtime family friend Jordyn Woods, who says HE kissed HER at a friend’s recent party.  While there was no sex or long-term scandalization happening behind Khloe’s back, Khloe lost her ish more than we’d ever seen, and the entire family dragged Jordyn through the mud.

After Jordyn escaped their KKKlutches, Khloe seemed to ONCE AGAIN warm up to taking Tristan back.  You know, “for the sake of their little family” because he’s ~TRue’S DaD~.  That umpteenth reunion was short lived as well, because at the end of 2021, Tristan was caught in 4K once again spending a Holiday at a house party and going into a room with multiple women and also hitting hotels with other women.  And it didn’t stop there.

A few days later, apparently, he jetted to Houston to hook up with his long time side chick Maralee – who didn’t know she was a side chick – and conceived a baby.  Maralee and Tristan’s son, Theo, is now 8 months old.

The pandemic hit and it was revealed on the Kardashians new Hulu sho that Tristan and Khloé were more than just co-parents. Now, not so much.

Last month, Tristan was spotted holding hands with a mystery woman in Greece.

At this point, they can take us out of the group chat!

By the way, Kim Kardashian and Pete Davidson have reportedly broke up after 9-months of dating. No one is surprised. Looks like momager Kris Jenner has her work cut out for her.