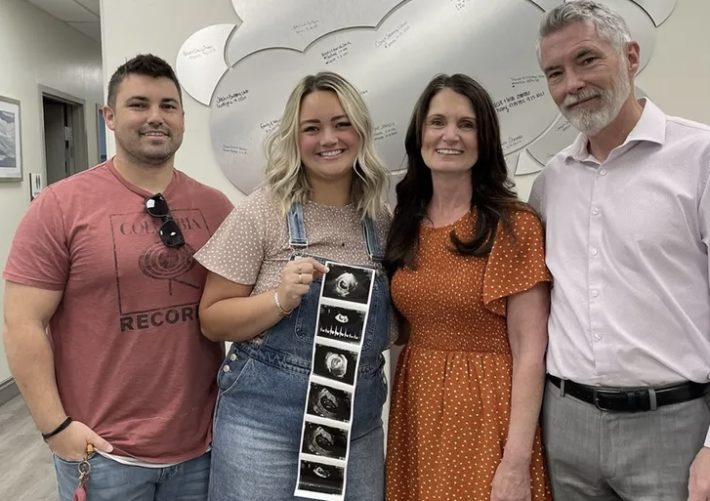 Nancy Hauck, 56, can’t wait to give birth to her granddaughter. “I never planned for it, but I am so glad I chose to carry my son’s baby,” she told SWNS.

The grandmother offered to become a surrogate for her son Jeff, 32, and his wife Cambria, 30, after her daughter-in-law had a life-saving hysterectomy following the traumatic birth of their second set of twins.

“I just suddenly had a feeling a few months after that I should offer to do it,” she explained. “I told my son, and he teared up and was shocked — I hadn’t even told my husband at that point. But he was really supportive.”

The young couple had struggled for six years before they welcomed twins, Vera and Ayva, now three, and then, Diseal and Luka, 11 months, via IVF.

Jeff and Cambria dreamed of having more children but weren’t sure what path to take when Cambria was advised to undergo a hysterectomy after her last pregnancy in September 2021.

“I felt grateful to have such a selfless and loving mom that was willing to make that kind of sacrifice for my family,” Jeff said.

“Having experienced over four years of infertility treatments, I knew how complicated the process can be and doubted that it was possible for her to carry a baby for us, but I was very moved that she would even offer.”

Hauck was mentally prepared to become a surrogate, but she wasn’t sure that her body was capable. “I told them I was willing but that I thought I would be old. But to my surprise medics said I was healthy and could do it and here I am.”

The family, who lives in Utah, had to act quickly before Hauck began menopause. And despite having just welcomed their second set of twins, Jeff and Cambria immediately decided to take advantage of the moment and try for their fifth child.

Nancy has had five healthy pregnancies in her life. Some of her other children were a little anxious for their mother’s health, but have all warmed up to the idea and are excited for their family to expand in this special way.

She started her hormone treatment in January 2022 and injected herself every day for 12 weeks with the help of her husband and Jeff’s dad, Jason, 59.

In February 2022, Hauck had the fertilized embryos that Jeff and Cambria collected from their other rounds of IVF transferred, and they immediately stuck. Hauck was pregnant with her grandchild.

Jeff was “humbled and amazed” when Hauck became pregnant just a few days after having the embryos transferred. “It felt like a miracle even though I had administered the dozens of shots that had prepared her body for pregnancy,” he said.

In May 2022, the family was overjoyed to learn that they were expecting a girl.

Cambria feels gratitude for her mother-in-law’s gracious offer. “She is sacrificing so much for us, and our family and we just feel so grateful,” she said.

“She has been nothing short of amazing and filled with so much light and grace. They say pregnancy comes with a glow, but Nancy’s is a full-on lighthouse.”

The family is all this in this together and Jeff and Cambria do their best to express their gratitude for Hauck’s sacrifice. They communicate constantly in group texts, sharing funny tidbits, special moments and messages of encouragement.

Cambria buys Hauck presents and cooks her favorite meals while her and Jeff beg to rub her feet or accommodate her in any way possible.

“We cannot wait to meet our daughter,” the expectant mother shared.

Hauck’s granddaughter is due on Nov. 5 and will be born with Jason, Jeff and Cambria in the room.

“There is no repayment for something like that — all I can do is follow the example my parents have set and try to give that same level of love and devotion to my own family and to others,” Jeff said.

The post Mom in Utah Decides to Carry Her Son’s Child at 56 appeared first on LOVEBSCOTT.