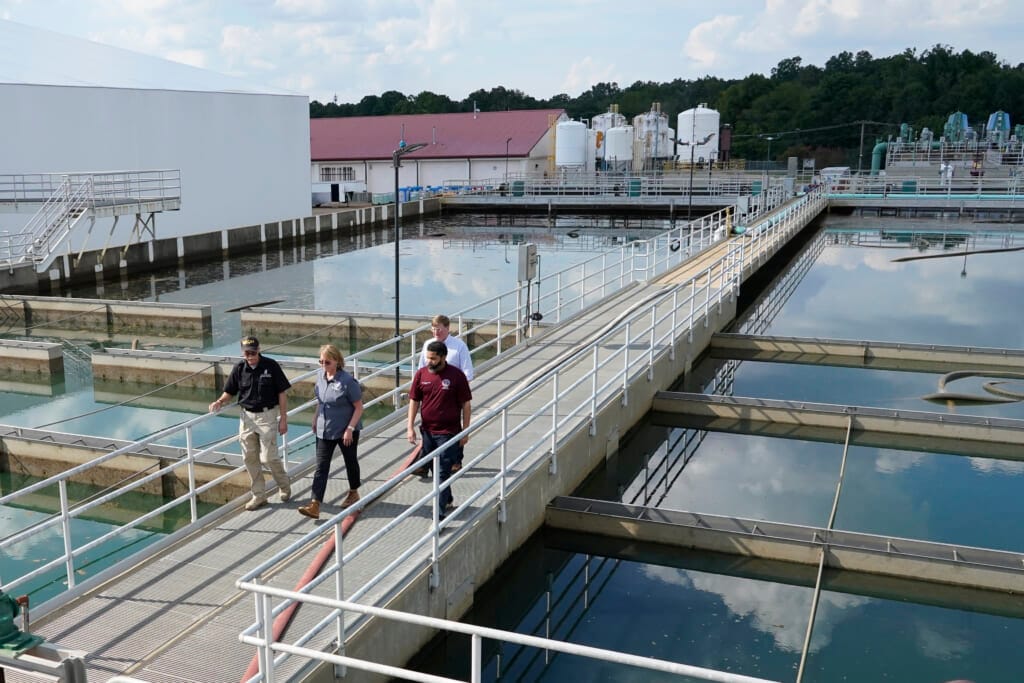 In a news release, Lumumba’s office said city officials discussed “plans of the federal agencies to immediately engage in negotiations” with Jackson’s leadership to address its water system needs.

Federal attorneys also sent a letter to city officials Monday threatening legal action against the city if it does not agree to negotiations related to its water system.

“The people of Jackson, Mississippi, have lacked access to safe and reliable water for decades. After years of neglect, Jackson’s water system finally reached a breaking point this summer, leaving tens of thousands of people without any running water for weeks,” Regan said. “These conditions are unacceptable in the United States of America.”

In a Monday letter sent to city officials and obtained by the news station WLBT-TV, Kim and attorneys for DOJ’s Environmental Enforcement Section said they were “prepared to file an action” against the city under the Safe Drinking Water Act, but hoped the matter could be resolved through an “enforceable agreement.” The letter said that state and local officials “had not acted to protect public health.”

Regan said in a separate statement that he wants to work with the city to reach a “judicially enforceable agreement,” which would avoid a legal dispute. A Department of Justice spokesperson declined to specify what such an agreement could entail. The purpose of the meeting was to discuss how the federal government might protect public health in Jackson and address “longstanding environmental justice issues” facing the city, the spokesperson told The Associated Press.

In a news release, Lumumba’s office said city officials discussed “plans of the federal agencies to immediately engage in negotiations” with Jackson’s leadership to address its water system needs.

Most of Jackson’s 150,000 residents lost running water for several days in late August and early September after heavy rainfall exacerbated problems in the city’s main treatment plant. The EPA had already issued a notice in January that Jackson’s system violates the federal Safe Drinking Water Act. Lumumba said coordination with the federal government represents the best path forward for the city to fix its water system.

“We believe that it is imperative that we enter into agreements with a team that is solely and sincerely focused on an objective of ensuring safe and reliable drinking water to the residents of Jackson,” Lumumba said in the news release.

On Sept. 15, Mississippi Gov. Tate Reeves and the state health department told people in Jackson that they no longer had to boil water before drinking it or using it to brush their teeth. But disruptions to clean water in parts of the city continued.

Lumumba’s office announced new boil-water notices Monday affecting approximately 1,000 water connections in the city. A city spokesperson said a contractor inadvertently severed a water line. This came after multiple major water leaks occurred the previous weekend. Several areas were placed under a precautionary boil-water notice, including the neighborhood home to Millsaps College. The college has asked for donations to help build its own water source.

The EPA said 300 boil water notices have been issued over the past two years in the city, most of which came before the most recent drinking water crisis. “It’s clear this community has suffered long enough,” Regan said.

In early September, Regan came to Jackson to meet with residents and elected officials about the water problems. He said the city needs to receive “its fair share” of federal money to repair the system.

A stopgap funding package Congress is set to consider this week includes disaster assistance for Jackson, a person familiar with the legislation said Monday.

Before the latest water crisis, Jackson had already been under a boil-water notice since late July because of cloudy water that could make people ill. Tests by the state health department in 2015 found higher-than-acceptable lead levels in some water samples.

An independent watchdog in the Environmental Protection Agency said in September it was being brought in to investigate Jackson’s troubled water system.

In September, four Jackson residents filed a class-action lawsuit in federal district court against the city, Lumumba and his immediate predecessor, three former public works directors, an engineering firm and a business that had a city contract to replace water meters. The lawsuit seeks to force Jackson to make specific fixes, including the removal or repair of pipes and equipment contaminated with lead.

Regan said the EPA has a responsibility to protect the health of Jackson residents.

“The people of Jackson, like all people in this country, deserve access to clean and safe water,” Regan said. “They also deserve more than words – they need action.”