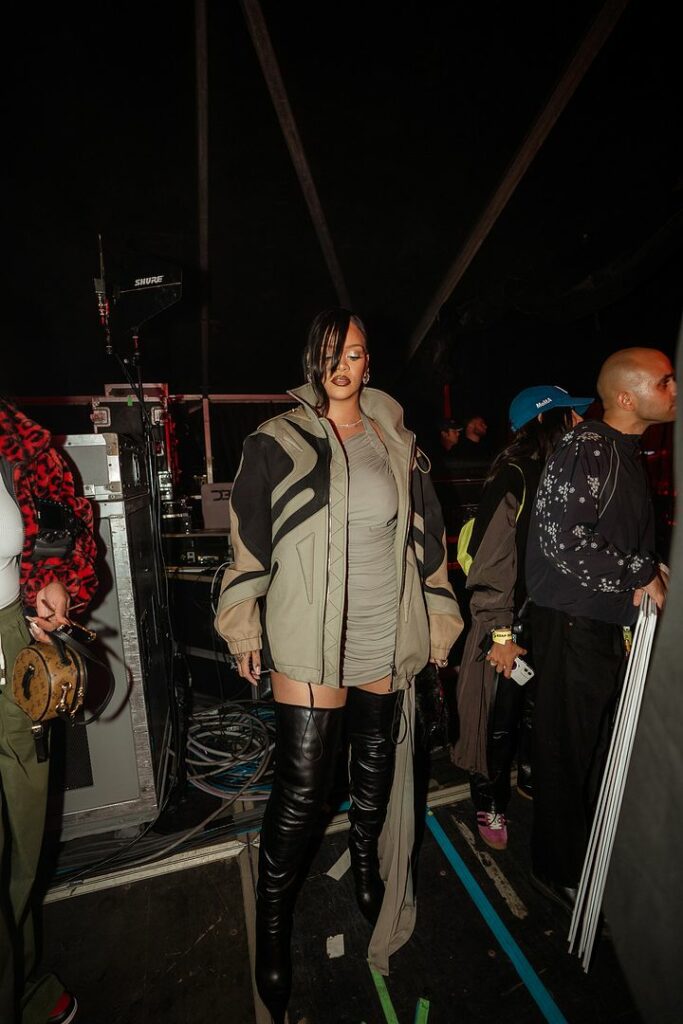 After turning down the gig in 2018, Rihanna has been confirmed to headline the Super Bowl LVII halftime show. Deets on the performance, plus flicks of Mama RiRi supporting her man A$AP Rocky at Rolling Loud last night inside…

The NFL now has a new meaning!

After making peace with the NFL, Rihanna is making her way to Super Bowl LVII as the 2023 halftime headliner! She hopped on social media to post a picture of her hand holding a football yesterday sending everyone in a frenzy:

She also posted the photo on her IG account, which raked up over 1 million likes in the first hour it was posted.

Super Bowl LVII takes place on February 12, 2023 at State Farm Stadium in Glendale, Arizona. News of Rihanna’s performance came just days after it was reported Taylor Swift turned down the gig for the sake of completing the rerecording of her back catalog.

Bad Gal RiRi’s performance will be sponsored by Apple Music and produced by Jay-Z’s Roc Nation, so it’s not under Pepsi this year.

Hov saluted the Grammy winning singer as a “generational talent” of “humble beginnings.”

”Rihanna is a generational talent, a woman of humble beginnings who has surpassed expectations at every turn,” Hov said in a statement. “A person born on the small island of Barbados who became one of the most prominent artists ever. Self-made in business and entertainment.”

“We are thrilled to welcome Rihanna to the Apple Music Super Bowl Halftime Show stage,” said Seth Dudowsky, NFL Head of Music. “Rihanna is a once in a generation artist who has been a cultural force throughout her career. We look forward to collaborating with Rihanna, Roc Nation and Apple Music to bring fans another historic Halftime Show performance.”

In 2018, the FENTY beauty mogul revealed she turned down the Super Bowl halftime gig, showing solidarity with former QB Colin Kaepernick, who protested during the National Anthem in an effort to raise awareness to police brutality.

“I couldn’t dare do that,” she told VOGUE a year after she declined the NFL’s Super Bowl performance offer. “For what? Who gains from that? Not my people. I just couldn’t be a sellout. I couldn’t be an enabler. There’s things within that organization that I do not agree with at all, and I was not about to go and be of service to them in any way.”

Now that Roc Nation has partnered with NFL, it seems Rih and the league have made peace.

Now that we know Rihanna will be hitting the stage for the Super Bowl, does that mean new music? After six years of no new music, the NAVY is keeping their fingers crossed that the new mom will drop SOMETHING before then. Meanwhile, Twitter has been cutting up about her promoting FENTY during the halftime show. Peep a few tweets below:

Rihanna at the Super Bowl: pic.twitter.com/XPnRCgMR7h

Rihanna at the superbowl:

rihanna leaving the super bowl stage after explaining all the new fenty products coming in 2024 pic.twitter.com/yhPtNWL9Qm

Who do you think Rihanna will bring out to rock out the stage with her?

“That’s basically what it is, making sure you have the right creative people around you,” he said, adding, “She might want to look into some of the people that we used to do our show.”

Before making her Super Bowl Halftime announcement, Rihanna got suited and booted to support her boyfriend A$AP Rocky at Rolling Loud in NYC on Saturday:

NFL is replacing the Pro Bowl with a multi-day skills competition and flag football game that will be played in Las Vegas the Sunday before the Super Bowl.

The NFL is eliminating the Pro Bowl and replacing it with weeklong skills competitions and a flag football game. The new event will be named The Pro Bowl Game.