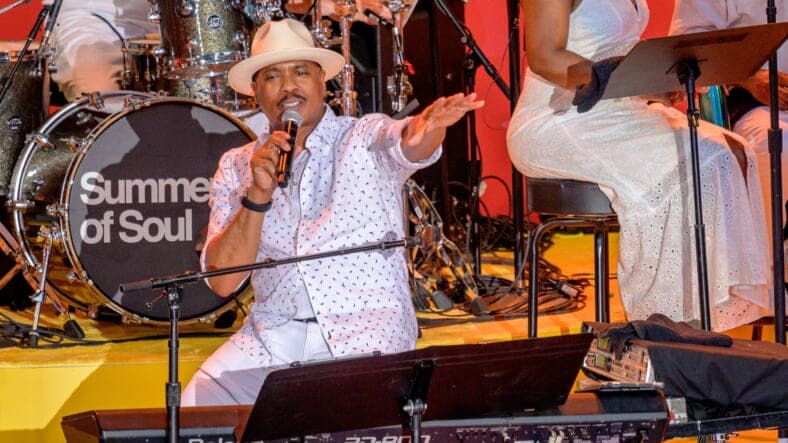 The decorated musician spoke with theGrio about entering his 14th year with “Dancing With the Stars” and how the New York music scene shaped him into one of the industry’s most sought-after musical directors.

“Dancing With the Stars” (“DWTS”) has entered new territory. This month, the long-running celebrity dance competition show started its first season on the Disney+ streaming service. Despite the significant change, the program continues to lean on the consistent greatness of its musical director (MD), Ray Chew.

Chew is entering his 14th season as MD for “DWTS” and he and his crew of musicians are excited to be featured on Disney+.

The New York native has been one of the industry’s most seasoned, sought-after musical directors, having served as MD for the “65th Primetime Emmy Awards,” the “44th NAACP Image Awards” and the “BET Awards.”

Chew is thankful for the mutual respect and support from fellow Black MDs. He’s engaged in ongoing conversations with Adam Blackstone, Rickey Minor, Patrice Rushen, and Greg Phillinganes. He calls them a “fraternity” that shares a “common struggle.”

With all of Chew’s success, he still hopes to break into another field in the musical realm: film scoring. Chew spoke with theGrio about the new season of “DWTS,” his background as a working New York musician and preparing for a transition into movie composition.

The demands of being the MD of “DWTS” is intense. Each week, Chew and his band are tasked with working with and giving the dancers and celebrities equal time to prepare their routines, writing arrangements, mastering several musical genres and styles as well as rehearsing all week with no off days. Chew says interactions with the dance duos and their instructions for him and the band are crucial to the success of the performances.

“The indications that they give me are very specific and precise,” he says. “They’ll get the song and they’ll go to a specific second count and say, ‘I need the accent here, I need an accent there.’ Sometimes they want to change some of the elements in the song and maybe change the musical style a little bit. All the alterations they need, it’s my job to deliver.”

Chew has not only been up to the task since joining “DWTS” but has also shaped the music into his image. Before he joined the show, the set-up was very ballroom-driven and the musical arrangements were more traditional. Since then, many of those elements have evolved to reflect the times.

“When I joined the show, that’s when we kind of turned the page with how we were approaching delivering the music,” Chew says. “Yes it’s live on TV. But we also have to deliver all the elements that you’re used to hearing in contemporary music, which requires a lot of vocal processing effects and all that kind of stuff, especially in hip-hop music. The drums got to sound hard in your face and all that kind of stuff.”

Another change that Chew is preparing for is the switch to Disney+. Without commercial breaks, he and the “DWTS” band have a new challenge. “During those commercials, that would give us all a chance to reset and get ready for the next upcoming segments,” Chew explained. “We’re doing this for live straight out. We have to take one big breath through the entire show nonstop. This is the first time a live show of this kind is being streamed straight through this. So, it’s another first for us.”

This change is just part of the job of a musical director, a job that Chew confides was always the plan. “My career path and trajectories have always been this. From a very early age, I knew that this was what I wanted to do.”

Chew, who grew up in Harlem and the Bronx, cut his teeth on the New York music scene as a keyboardist and writer. Time has prepped him well for his dream job. “I’ve played every kind of gig there was in New York from every kind of club and after-hours spot, off-Broadway, every kind of thing,” Chew says. “And in doing that, it prepared me to know what it was like to assume a leadership position.”

After spending time in the house band of “Saturday Night Live” in the early ’80s, Chew’s first gig as a musical director came with “Showtime at the Apollo.” He believes that “Showtime” was a chief inspiration for most of the popular competitive music and performance shows that followed. Mainly because of the critical component of the audience influencing who wins and providing a showcase for amateur performers.

“It was the precursor for all those to follow: ‘American Idol,’ ‘Star Search,’ all that,” Chew says. “The whole advent of presenting talent that was not professional, just in terms of being signed artists, anything like that. There were no shows that would do that before on TV.”

Since “SNL” and “Showtime at the Apollo,” he has landed some of the most prestigious MD gigs in the Big Apple. He was the MD for the Macy’s Thanksgiving Day Parade no less than nine times, the Rockefeller Center Tree Lighting ceremony in 2021 and this year’s Macy’s 4th of July special.

For Chew’s next big New York project, he’s gearing up for Carnegie Hall’s “A Night of Inspiration” in December. He will co-produce and serve as the MD for a large ensemble, star-studded tribute to gospel legend Richard Smallwood.

With so much accumulated experience and expertise, Chew still aspires to do more. Specifically, he wants to become a movie composer, a field that he finds challenging to navigate as he awaits his first opportunity.

“It’s a craft that I’ve been developing for many years,” Chew says. “I’ve been doing short films for many years and working on the craft. And I’ve gotten a lot of my mentoring by people like Quincy Jones. He showed me what it was like to do music for film, giving me some hands-on mentorship. What he did for film and scoring is a path that I’d like to replicate.”

Matthew Allen is an entertainment writer of music and culture for theGrio. He is an award-winning music journalist, TV producer and director based in Brooklyn, NY. He’s interviewed the likes of Quincy Jones, Jill Scott, Smokey Robinson and more for publications such as Ebony, Jet, The Root, Village Voice, Wax Poetics, Revive Music, Okayplayer, and Soulhead. His video work can be seen on PBS/All Arts, Brooklyn Free Speech TV and BRIC TV.