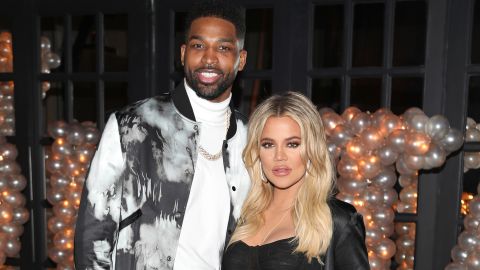 Khloé Kardashian and Tristan Thompson’s relationship, it turns out, can get even more complicated.

Tristan Thompson secretly proposed to Khloé Kardashian in December 2020 — but she rejected him.

The stunning revelation was made on Thursday’s episode of “The Kardashians” when Kim Kardashian spilled that the Good American co-founder never even told her family.

“The fact that he proposed and you never told us, and I asked him months later,” Kim said to Khloé in a conversation.

The Skims founder then recalled Tristan saying, “‘Oh, I did it months ago. She didn’t tell you guys?’”

It turned out the NBA free agent, 31, popped the question in December 2020, but Khloé turned him down because she didn’t feel “proud” of his offer.

“I need to make sure this is a totally different relationship because I want to be proud to say I’m engaged to anyone,” Khloé said in a confessional, “and that’s why I said I’m not comfortable accepting this right now because I’m not excited to tell my family.”

The “Revenge Body” alum continued, “As hurtful as that probably was for him to hear it was the truth. I’m not ever gonna accept something and give someone false hope.”

While Khloé, 38, was strong enough to turn down her on-again, off-again beau, Kim joked she’d “have to say yes” to a proposal because she’d “just feel so bad.”

Throughout the episode, the family tries to figure out how to help Khloé, who is still reeling from finding out that Thompson not only cheated on her again but also impregnated Maralee Nichols while pushing Khloé to have a baby via surrogate.

“I don’t know if I’m strong,” Khloé said. “I’m literally just numb to all this s–t, like how much can people take?”

The heartbreak came as the former “Kocktails With Khloé” star found out that she and Thompson would have a baby boy. Although they were no longer a couple, Khloé allowed the athlete to visit their newborn in the hospital.

“Now that my son is here, I get to move on and I get to enjoy,” she said during the premiere. “It’s almost like I get to close that chapter and be done with this trauma and put it behind me.”