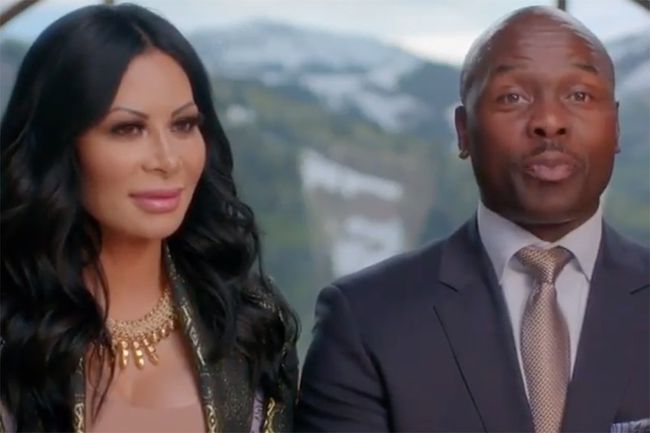 Jen Shah is coming to terms with her prison-bound reality this season on ‘The Real Housewives of Salt Lake City.’

During the Bravo show’s season 3 premiere, the 48-year-old shared she had to make some major adjustments to her once-over-the-top, lavish lifestyle because of her ongoing legal battles.

“I went from the Barbie dream house closet to a normal size closet,” Jen explained on Wednesday’s episode, adding that she went from a 9,000-square-foot home to one half that size.

Jen was arrested in March 2021 alongside assistant Stuart Smith. Both were charged with conspiracy to commit wire fraud in connection with telemarketing and conspiracy to commit money laundering. The housewife initially plead not guilty and even had her legal team file paperwork to dismiss the charges, but had a change of plans and switched to a guilty plea back in July.

“Ms. Shah is a good woman who crossed a line,” Priya Chaudhry, an attorney for the reality star, told PEOPLE at the time. “She accepts full responsibility for her actions and deeply apologizes to all who have been harmed. Ms. Shah is also sorry for disappointing her husband, children, family, friends, and supporters. Jen pled guilty because she wants to pay her debt to society and put this ordeal behind her and her family.”

On Wednesday’s episode of RHOSLC, Jen’s house wasn’t the only part of her life she had to adjust to accommodate her new financial reality.

“I also had to downsize the Shah Squad,” she shared in a confessional intercut with shots of her pacing around her living room. “I’m doing my best, that’s all I can say. I’m doing my very, very best.”

In a conversation with her “voice of reason in all of this,” husband Coach Sharrieff Shah, she said, “Every penny is going to fighting my case.”

Sharrieff — whose birthday party Jen was planning with new Housewife Angie Katsanevas — had one request for the Rat Pack-themed bash: No drama.

“The trial in itself is a lot to deal with,” he said.

Although they’d been facing tough times, the couple put their troubles aside to dance the night away at.

“The party looks absolutely beautiful,” she said in a confessional. “Now, if I hosted the party at my home, it would look a little bit different. It was hard to let go.”

Jen concluded her husband’s evening with a heartfelt toast: “This year it was important to me to do something special,. I know that we’ve been through a lot. Because of everything that we’ve been going through, it means more to me than ever to have people in my life that really, truly love me and love our family.”

In his own confessional, Sharrieff admitted, “The one thing that can bring me to tears almost instantly is thinking of life without my wife by my side. It’s hard to stomach.”

Although the Shahs had asked for the women to behave themselves at his birthday, no Housewives episode would be complete without some party disfavor — and the tension between Meredith Marks and Lisa Barlow from last season continued to linger into Wednesday’s premiere.

The former besties had stopped speaking to one another after Lisa went off in a hot mic moment about Meredith, screaming, “I am done with Meredith, cause I’m not a f—ing whore and I don’t cheat on my husband.”

As a new season began, Lisa was clearly willing to pull out all the stops to win her friend back. She sits down for lunch with Heather Gay to ask for her help mending fences

“She said she needed me and she’s never said she’s needed me before,” Heather joked.

Lisa told Heather she “was in a blind rage” during the “unintentional” tirade and claimed she would do whatever it took to make it right.

As Heather gave Lisa tips on how to fix things, Meredith and Jen — who also had their own beef last season when Jen liked homophobic tweets about Meredith’s son Brooks — sat in a hot tub discussing the feud.

For her part, Meredith claimed she’d heard gossip about Lisa’s family’s business, finances and even her marriage. Jen confirmed she’d also heard rumors of an affair.

But, for now, Meredith was keeping mum.

The ladies came face to face at the birthday party.

“At some point I want to talk to you,” Lisa said as they hugged. “You’re open to it?”

As Lisa walked away, Meredith told Jen that her former bestie’s desire for a conversation had come just a little too late after Lisa had “two months to reach out.” In her confessional, Meredith said she was decidedly “not interested.”

She continued, “I can’t believe I said those things.

Claiming she wasn’t sleeping because of the friendship rift, she said, “I’m not making excuses, but I was coming from a place of hurt. I’ve never talked badly about Meredith to anybody. I thought I was in a private space hurting. It wasn’t meant for anybody else to hear.”

Across the room, Meredith was not happy about Lisa speaking with Seth and told Jen: “She shouldn’t be attacking my husband at the party.”

After Lisa and her husband John left the party, Seth told the ladies he had doubts that Lisa had changed or taken accountability.

Jen Shah is due to be sentenced November 28. She’s facing up to 30 years, but asking for no more than 11 with her plea deal.

The post ‘RHOSLC’ : Jen Shah Says Leaving Family for Prison ‘Would Literally Kill Me’ Ahead of Guilty Plea appeared first on LOVEBSCOTT.