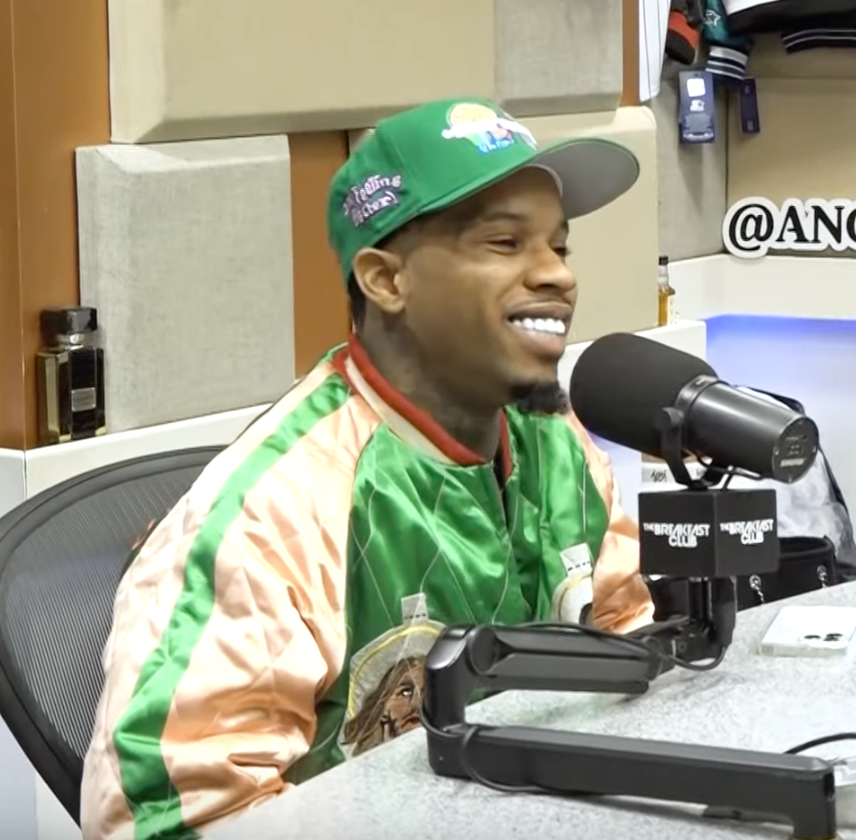 Tory Lanez is gearing up to drop his ‘Sorry 4 What’ album and stopped by “The Breakfast Club” to dish on his new body of work. He talked about how certain narratives have manifested – what some people call – an “aggressive aura.” No surprise he didn’t want to speak on his recent situation with August Alsina and his open felony case involving Megan Thee Stallion. However, he did dish on auditioning for roles in “Power” and King Richard. Highlights inside…

Tory Lanez is on the promo trail before he drops his new album, Sorry 4 What, which has folks speculating if the album title was a shot fired at all of the drama he has going on in his life.

Earlier this month, singer August Alsina accused the Canadian artist of knocking him out after he refused to shake his hand backstage at a concert in Chicago. The exchange was caught on camera and the clip of the run-in went viral.

Afterwards, August took to social media to post pictures of his injuries due to the alleged assault. It has been reported the LAPD is investigating the incident due to his open felony assault case that involves Megan Thee Stallion.

While speaking with radio hosts Angela Yee and DJ Envy on Power 105’s “The Breakfast Club,” Tory was asked if there was an open investigation following the alleged August Alsina assault and he made it clear he wasn’t trying to speak on it.

He said he doesn’t have a problem with August Alsina and revealed he wrote for him on the track titled, “My N****,” he did with rapper Meek Mill.

Angela asked about his freestyle, where he dissed August for “snitching” about his “entanglement” with Jada Pinkett-Smith, the wife of Will Smith. Again, he said he’s not here to talk about that.

Over the last few years, Tory Lanez has been the topic of discussion due to his case surrounding the Summer 2020 shooting of Megan Thee Stallion. Angela Yee asked him if he’s forgiving of people who “picked sides” and were no longer in his corner. He said he could never be upset about someone’s opinion and that he knows a lot of people’s opinion of him has changed.

He said he would work with someone who said negative things about him because he’s “about this money” and he doesn’t hold grudges.

”To not forgive you is just bitter and I’m not a bitter-hearted person,” he said.

“I don’t forget but I forgive”. – @torylanez Tap in to #Torys teaching of how to be  unapologetic pic.twitter.com/XCJ53BQzU5

Envy asked how his relationships with other artists have changed since the shooting.

”The way it’s painted in the media, they would have you thinking nobody f*cks with me. I talk to everybody I’ve spoke to before,” he shared. He said people didn’t really have an issue with him, they just didn’t want backlash from something they weren’t involved in.

When it comes to censoring his music, he said he doesn’t really say anything “wild” in his lyrics, so he’s not concerned about that. However, he said he has to filter what he posts on Twitter. As you know, his Twitter fingers caused him to be handcuffed in court and have his bail increased after he violated the protective order for talking about the Houston Hottie on social media..

Back to the August drama, Envy joked about Tory being kicked off the comedy/music tour following the incident with August.

Comedian/“Wild ’N Out” star Rip Michaels – the tour’s creator – said Tory was kicked off the “Fall Back in Love Comedy & Music Jam ” tour because he wanted to make sure “every person in that audience has a great time and a great feeling.” He told TMZ August missed his performance the next day because the assault landed him in urgent care. Rip also confirmed there was no fight – it was “more of an assault,” Rip recalled.

The Sorry 4 What singer/rapper said he was never kicked off the tour because he was only booked for three dates and the third date got canceled because they didn’t have enough money to pay him. He said he was only scheduled to perform two song for two shows.

”It wasn’t enough money. I’m not being funny. If we’re just being honest. I do real tours. I really sell tickets by myself. I wouldn’t be on an R&B tour with comedy,” he explained. Tory said they could only afford two songs, which was $40,000.

With accusations of assault and open cases, folks have noted that he has an “aggressive aura” about him, which he claims is not true. He said he’s one of the most nicest people in the world. Oh.

”There’s no aggressive aura about me,” he explained. “There’s aggressive narratives that are only told by one side. Anybody who really knows me….I’m one of the most gentle, nicest people in the world. I’m a n**** who plays too much. I’m always laughing. I’m always joking around. I never portray to be a gangsta. I never portray to be a thug. I stand on business. I stand on positivity, but I stand on what’s right. The difference is, in the last two or three years, it’s not that Tory Lanez is more aggressive – it’s that stories come out and Tory Lanez can’t explain himself no more. Tory Lanez is a very outspoken person.”

Breaking out of just doing music, Tory shared he’s “definitely in the medical field now in a major way.” Peep the clip below:

“If you fail to plan, you plan to fail.” @Torylanez has investments outside of the music . Radios up #TheBreakfastClub pic.twitter.com/9R5YQU2MFv

Not only is he getting into the medical field, he said he’s shooting a TV show based on a song he wrote. He said he wanted to show off his acting skills because he got tired of being turned down for big acting roles. He shared he auditioned for King Richard, the biopic about Serena & Venus Williams’ dad, and “Power.”

”I almost got the role for King Richard – the Will Smith movie. I was supposed to be the aggressor,” he said. “The dude that got shot up at the corner store. Like, “Power.” I was supposed to do JoeyBadzz part. That type of character, every time I’ve always gotten called back multiple times. Art is art.”

You can check out his full interview below:

In a few months, Tory will stand trial in the Megan Thee Stallion shooting. According to Rolling Stone, the trial was supposed to start November 28th, but it has been delayed to December 8th as eyewitnesses are subpoenaed. Do you think Tory Lanez will end up getting jail time and deported?