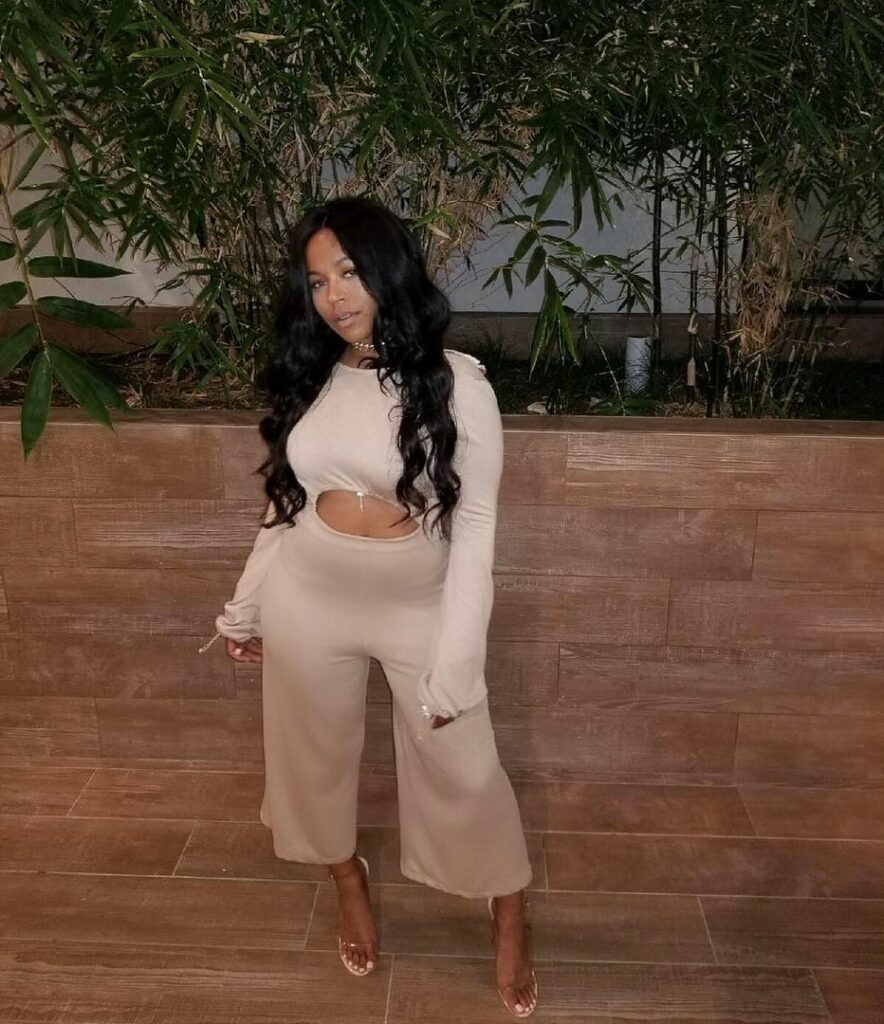 In honor of Domestic Violence Awareness Month, Ashanti’s sister, Kenashia “Shia” Douglas, opens up about her violent relationship with her ex-fiancé, Slow Bucks. She shared extremely disturbing photos about being abused at the hands of the man she once loved. More inside…

October is Domestic Violence Awareness Month, which highlights a time to acknowledge domestic violence survivors and be a voice for its victims.

A few years ago, Kenashia “Shia” Douglas – sister of singer Ashanti – revealed she was involved in a violent relationship with her ex-fiancé, Slow Bucks. On her 32nd birthday in 2020, Shia shared photos and videos of her battered face, sharing how her teeth were knocked out by a man she once was madly in love with and clips of her reconstruction surgery on her mouth and jaw.

Since then, Shia has been a domestic violence advocate, speaking out about how she’s on the journey to heal from her past and all of the trauma she has endured. To kick off the month of October, Shia shared an extremely disturbing and vulnerable post on Instagram about being horrifically abused at the hands of her ex-fiancé. She also spoke about a pregnancy as well.

”I thank GOD! My anscestors, angels and guides for pulling me through this Warzone alive!,” Shia wrote in the caption of a collage of pictures that displayed her injuries. “It was Toxic, and it was dangerous not only for obvious reasons but also because to the outside world everything seemed fine.. but those closest to us knew! But didn’t know how to help, It got to a point where the abuse was regular behavior, and I would fight back pick up whatever I could to protect myself.. truthfully lots of us have grown up in toxic environments where the adults around us argue or fight to which we seem to normalize.. this starts the beginning of our inner child wounds and Or traumas… I didn’t have a normal child hood, and although my parents were together the circumstances of our family dynamic had me strongly wanting to do things a different way with my own family.. My undying loyalty and strong desire to create my own family had me accepting things I never should have,” she wrote.

”I’ve been Punched, spat on, strangled, pushed to the ground. And been threatened with a [gun emoji],” she continued.

”I look at these pictures and I hold grace and patience for the woman I was and everything she didn’t know! I love her and thank her for her role in my journey. I don’t consider myself a victim or a survivor, this is all apart of my story, my life and my journey…”

Shia said she wanted people to see what the horrific situation looks like, and how, she too, became a victim despite having a two parent household and the type of life she’s had growing up. She warned victims to get OUT of that toxic relationship because it could cost you your life if you don’t get help and get out.

”This post is for any woman or man who has yet to truly recognize the power they possess, and finds themselves in a environment that is unhealthy, please know if they’ve done it once they will do it again.. it is inevitable! @wifeofcreation”

”Ps…My 8,9 teeth were broken in our last fight those 2 teeth are directly connected to the womb. Even while I was pregnant my ex use to say ‘that’s why you can’t even have kids.’ I promise you! I will and they will be beautiful and nothing like you or what you come from!”

After receiving an overwhelming amount of love on social media, Shia thanked everyone for their kind words: 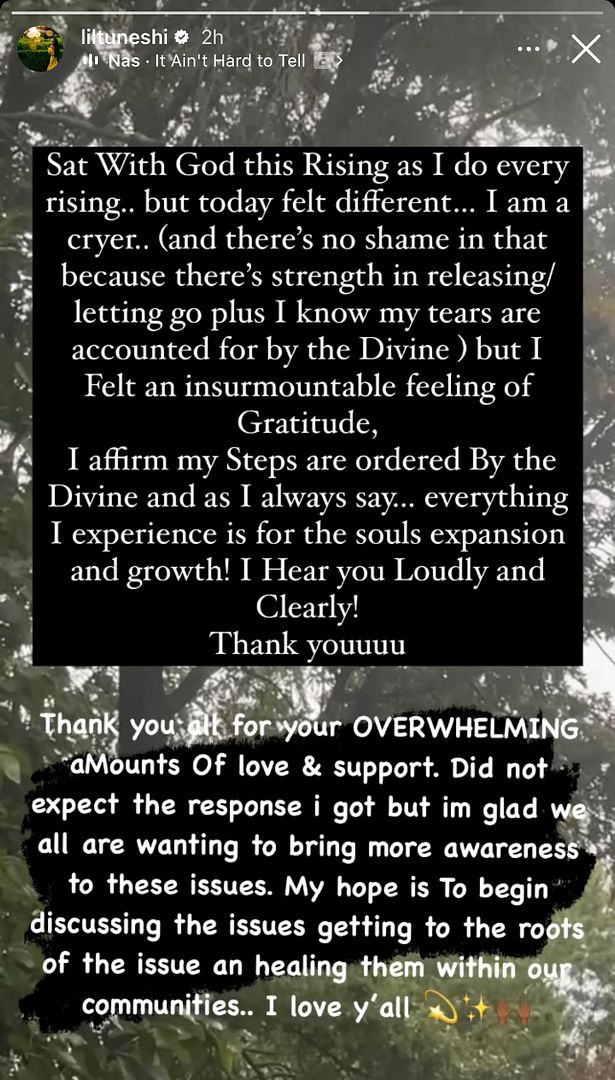 From the outside looking in, it appeared Shia had a perfect life, so to speak. She’s the younger sister of Grammy Award winning singer-songwriter Ashanti. Over 13 years, she was seemingly all wrapped up in love with Slow Bucks; however, there was a dark energy surrounding their relationship, which resulted in violent arguments that left Shia bruised and battered on multiple occasions.

After first revealing she was in an abusive relationship, Shia later sat down alongside her sister Ashanti during an interview with Power 105’s Angie Martinez in November 2021 to speak on lessons she has learned from her toxic relationship.

Even after Shia spoke out about being abused by her ex, it seems the industry hasn’t canceled Slow Bucks in any way. He’s still out here rubbing elbows with celebs, seemingly living his best life:

Speaking to ESSENCE magazine last month, Shia talked about what moved her to launch her wellness brand.

“Wife of Creation is rooted in conscious awareness and holistic healing. After my traumatic experience, I was trying to figure out what my next move in life was going to be. From all the knowledge that I have been obtaining on my journey, I wanted to share it with people,” she told the publication. “The name itself I found in a healing prayer. One day, I was really down and I gravitated towards ancient Kemetic teachings. I was reciting a healing prayer to the goddess Sekhmet and I was able to find the name Wife of Creation.”

The wellness brand offers knowledge through a network of professionals “versed in the areas of mind, body, soul and spirit,” a marketplace to support a holistic lifestyle, and a sense of community for those who feel like they have no where else to turn as they work on themselves.

“I hope that Wife of Creation will inspire other Black women to shine brighter than their shadows. I hope that Wife of Creation inspires them to be their authentic selves, always,” she says. “My intention is to create a community where both men and women can heal on a holistic level and are given the tools to connect with themselves. It’s so easy to throw the terms around like ‘heal’ or ‘shadow work,’ but it’s a whole different ball game to hold someone’s hand through the work, while you are also going through healing yourself.”

It’s shocking and heartbreaking to know Shia (and many women and men like her) was abused at the hands of the one person who you trust to always protect you. Just know, if you’re involved in an abusive relationship, you’re not alone and there’s help out there to assist you in breaking free from that trauma.

If you or someone you know is in an unhealthy or abusive relationship, please reach out to the National Domestic Violence Hotline at 1.800.799.7233 immediately.