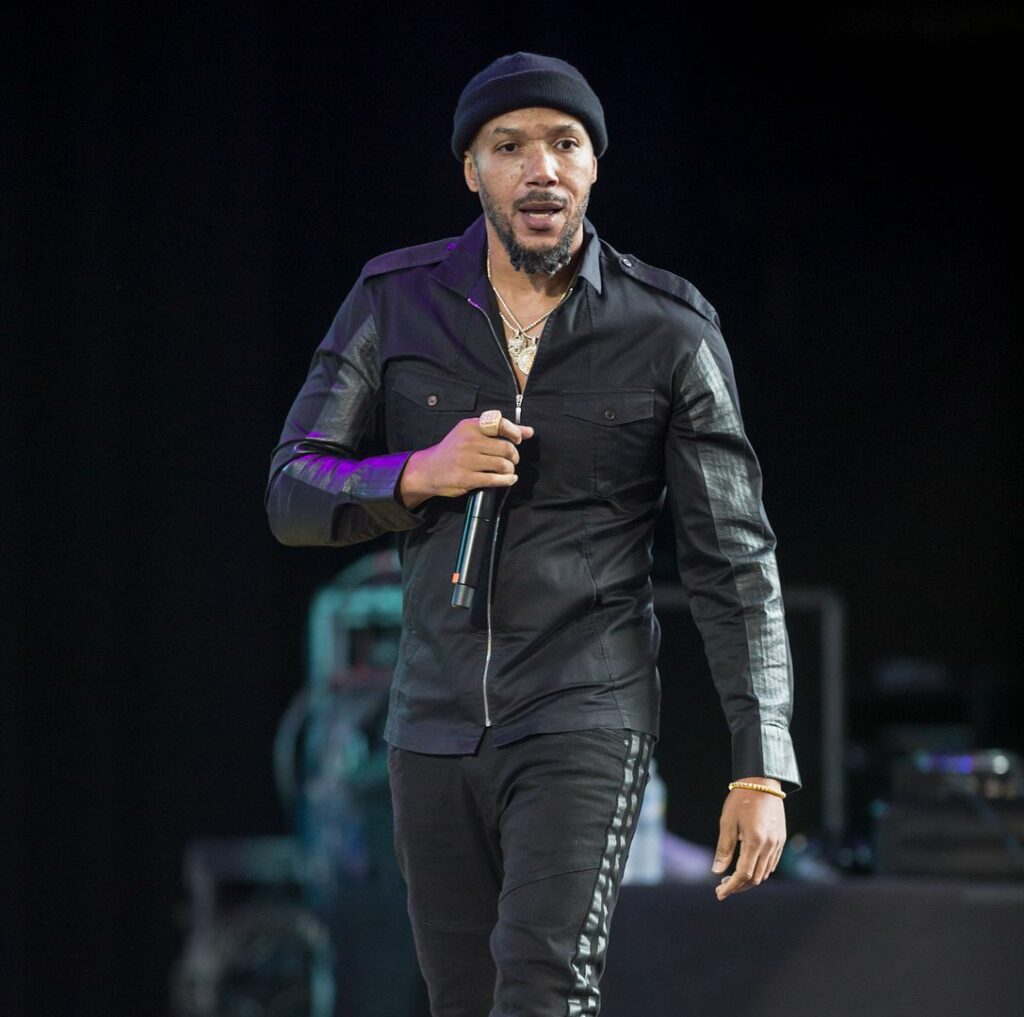 Singer Lyfe Jennings hopped on social media to share a random story about how he and serial killer Jeffrey Dahmer bonded in prison over R&B music. Find out what he said inside…

Serial killer Jeffrey Dahmer has been trending online after Netflix dropped their record-breaking series “Dahmer — Monster: The Jeffrey Dahmer Story.” The series has already set a Netflix record as the biggest series debut, with 196.2 million hours viewed in its first week.

The series – created and written by Ryan Murphy – chronicles the brutal murders of men and young boys by serial killer Jeffrey Dahmer (played by Evan Peters) between 1978 and 1991.

Since the series’ release, there has been tons of online discussions about the show as well as facts about what actually happened, including Rick Ross asking Twitter to find him some “Dahmer Shades.”

#RickRoss asked Twitter to find him some #DahmerShades and folks began to drag him for it. https://t.co/GQtBcZOWr6 pic.twitter.com/bYwIMJJahY

With a newfound interest in Dahmer, R&B singer Lyfe Jennings figured he would share his personal encounter with the serial killer.

If you didn’t know, the “Must Be Nice” singer was sentenced to 11 years in prison for felony arson at the age of 14. According to his TV One “Unsung” episode, Lyfe was sentenced to prison after friends he was with tried to firebomb the residence of a drug dealer. Unfortunately, they set the wrong house on fire, killing an innocent woman. He was released in 2002 and launched his music career with his debut album, Lyfe 268-192, using his inmate identification number.

Also, Lyfe was sentenced to three years in jail after he was arrested in 2008 for fleeing the scene after a dispute with the mother of his child. 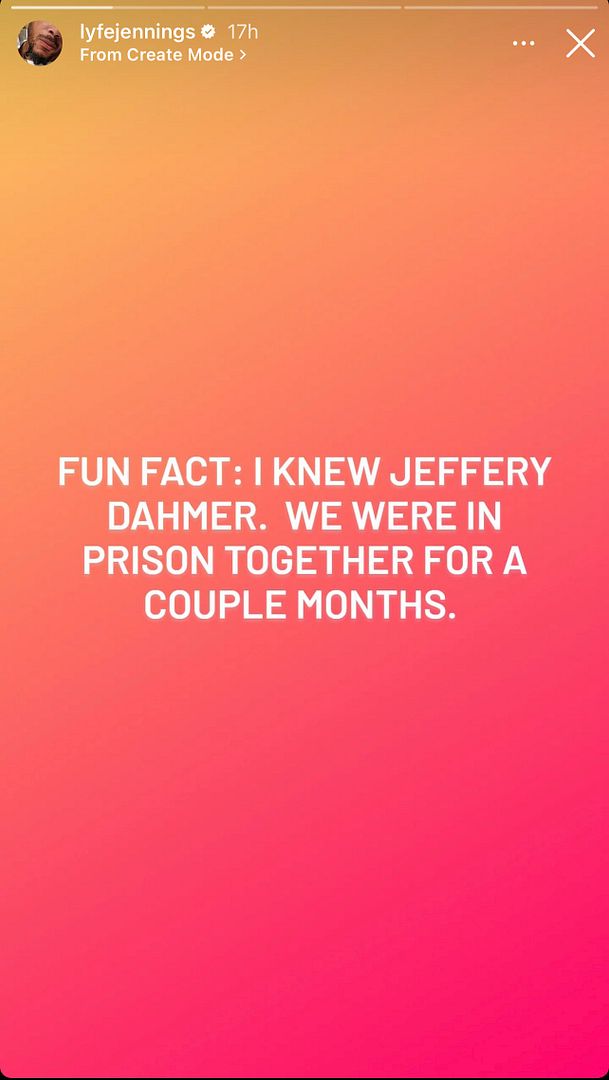 On Sunday, Lyfe wrote on IG Stories, “Fun Fact: I knew Jeffery Dahmer,” he wrote. “We were in prison together for a couple months.”

“I know the little homie, man,” he said. “I mean I wasn’t his friend or nothing like that,” he explained. “You know a lot of people gon’ say it’s cap but it’s easy to check. I was locked up in ’92. He had to get extradited from Milwaukee for the little body that he had in Ohio.”

According to RadarOnline, Dahmer and Lyfe Jennings were inmates at the Columbia Correctional Institute in Portage, Wisconsin.

“One day, you know, we in maximum security and they like everybody against the wall, cause I was a porter in a little bridge where they put inmates and stuff like that. So they bring the white boy in, and it just so happened that they put him in the cell next to me. I’m out there sweeping and mopping.”

He continued, “He was only there for a short period of time,” Lyfe noted. “I don’t even really remember how long but the first day and a half, you didn’t really hear nothing from the cat. But in a couple days he was banging on the doors because you know we locked down so much down there. You gotta have some fun so a cat just kinda release … by yelling and beating on doors or whatever. That was back in the penitentiary days where you could smoke in the penitentiary right? I used to run across dude all the time cause he wanted a cigarette, he used to trade stuff for little cigarettes.”

Dahmer then requested he sing Mint Condition’s “Breakin’ My Heart (Pretty Brown Eyes),” which he sung for him.

”He was asking me, you’d never guess what song he asked me did I know. Mint Condition ‘Breakin’ My Heart (Pretty Brown Eyes)’ He asked me did I know that record and I sang the record, he beated on the door and all this stuff. I ain’t saying the homie is a celebrity or nothing, I’m just telling you my experience man.”

Watch the clip above.

After sharing his story, he was met with backlash from social media users. He hopped on his IG Stories to address the critics. 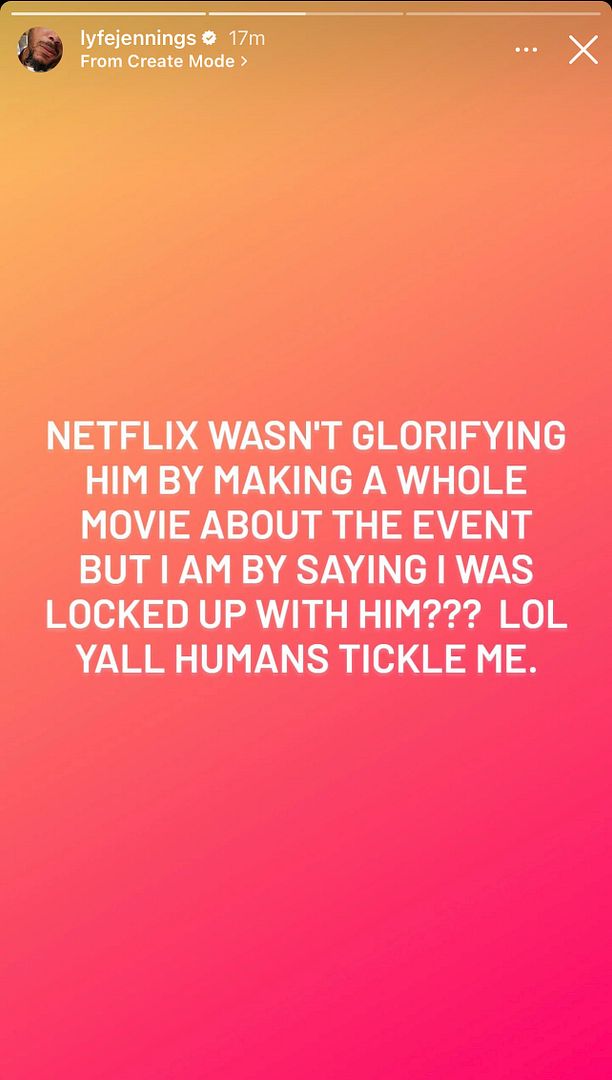 ”Netflix wasn’t glorifying him by making a whole movie about the event but I am saying I was locked up with him??? LOL Y’all humans tickle me”

The singer then shared more evidence on his IG timeline to prove he was, in fact, locked up in the same facility as Dahmer:

“But something happened with the transportation, which is normal, so he stayed longer in max,” he captioned. “But he never came to Ohio right?? Lol nobody gotta lie to yall yall still playin rkelly at ya kids pool party but mad at me smh”

Have you watched “Dahmer” on Netflix yet? If so, thoughts?