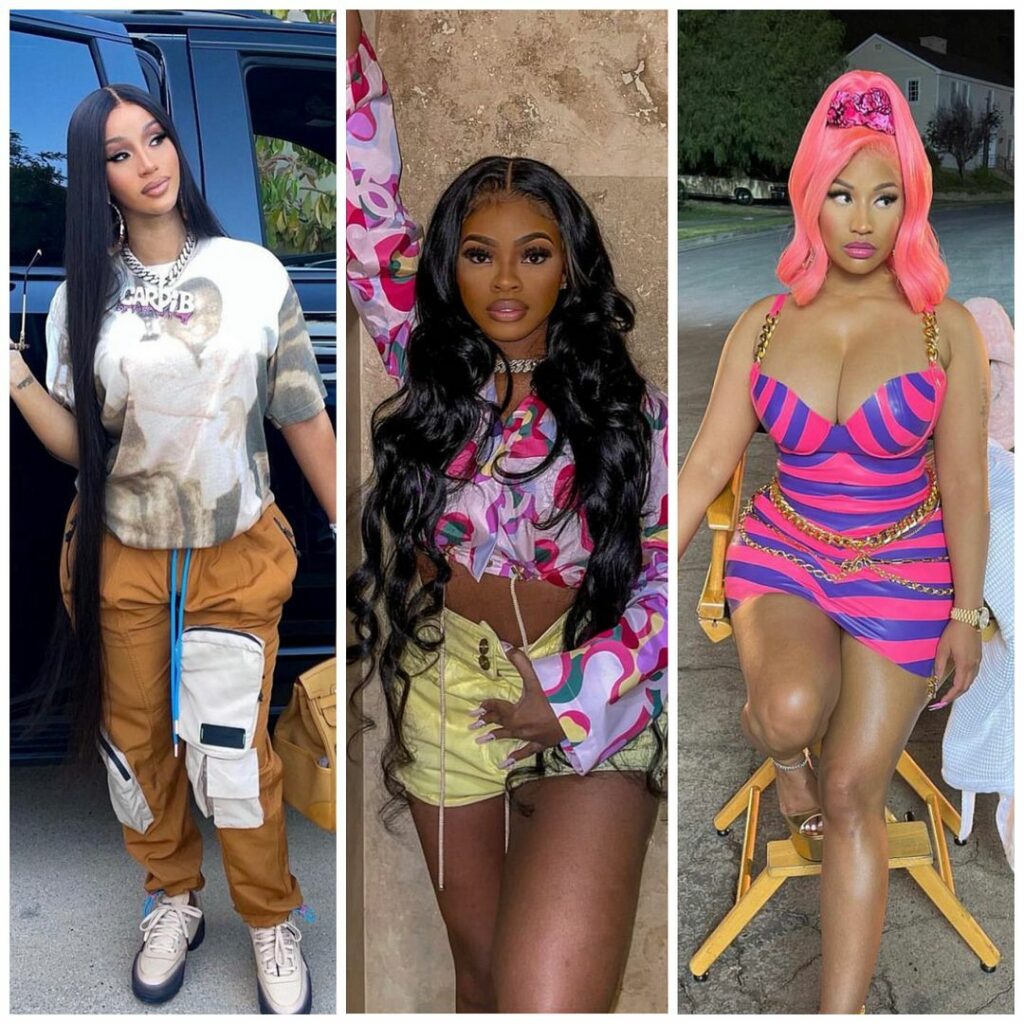 The rap gworls are fighting! Cardi B and JT got into a Twitter feud yesterday, which resulted in Nicki Minaj joining in by changing her Twitter profile pic to JT. Cardi responded with the same energy, changing her Twitter profile pic to Nicki’s nemesis Remy Ma and posting the ex-girlfriend of Nicki’s husband, Kenneth Petty. Get the messy deets inside….

The rap ladies spent the day hurling insults and jabs on Twitter, causing an uproar between their fan pages and fan accounts.

Cardi B and City Girls rapper JT got into a heated Twitter exchange after JT congratulated GloRilla for “Tomorrow 2” making it into the Top 10 of Billboard’s Hot 100 list. Fans quickly noticed JT didn’t mention Cardi, who is featured on the track: 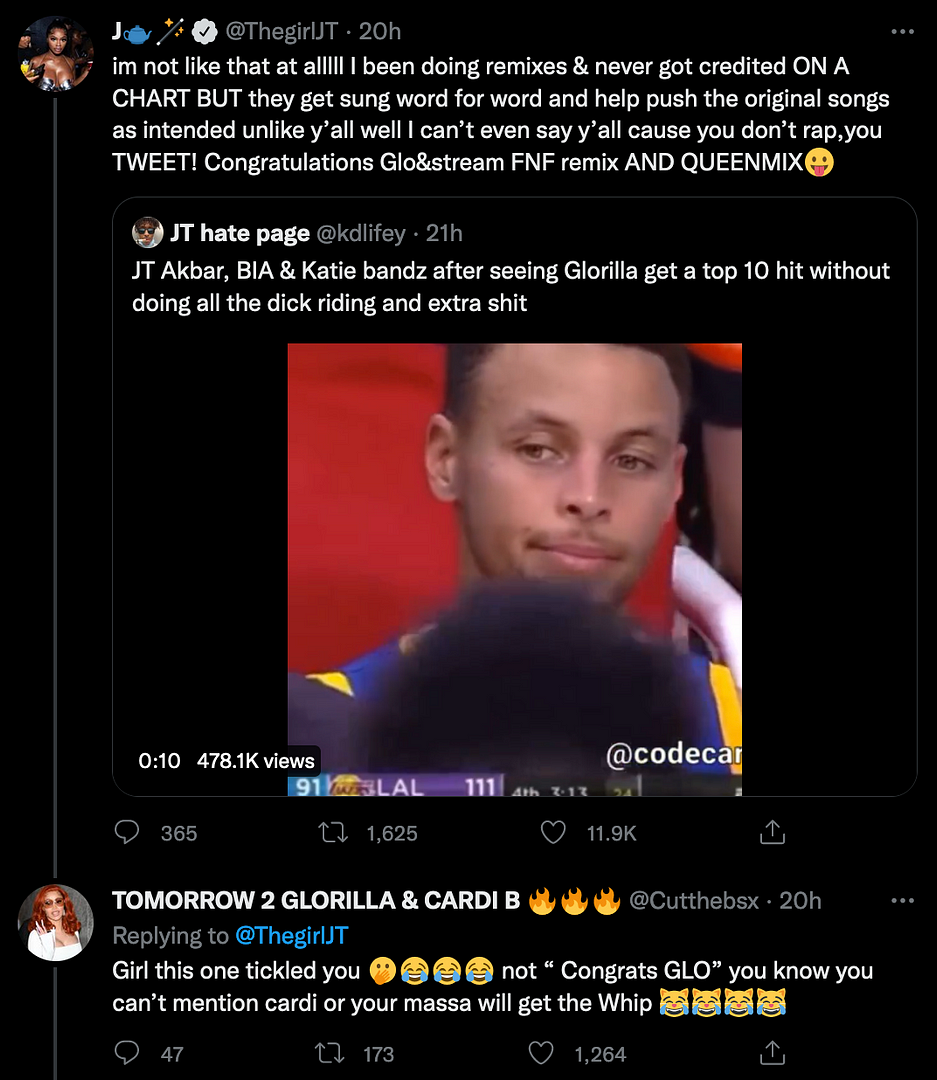 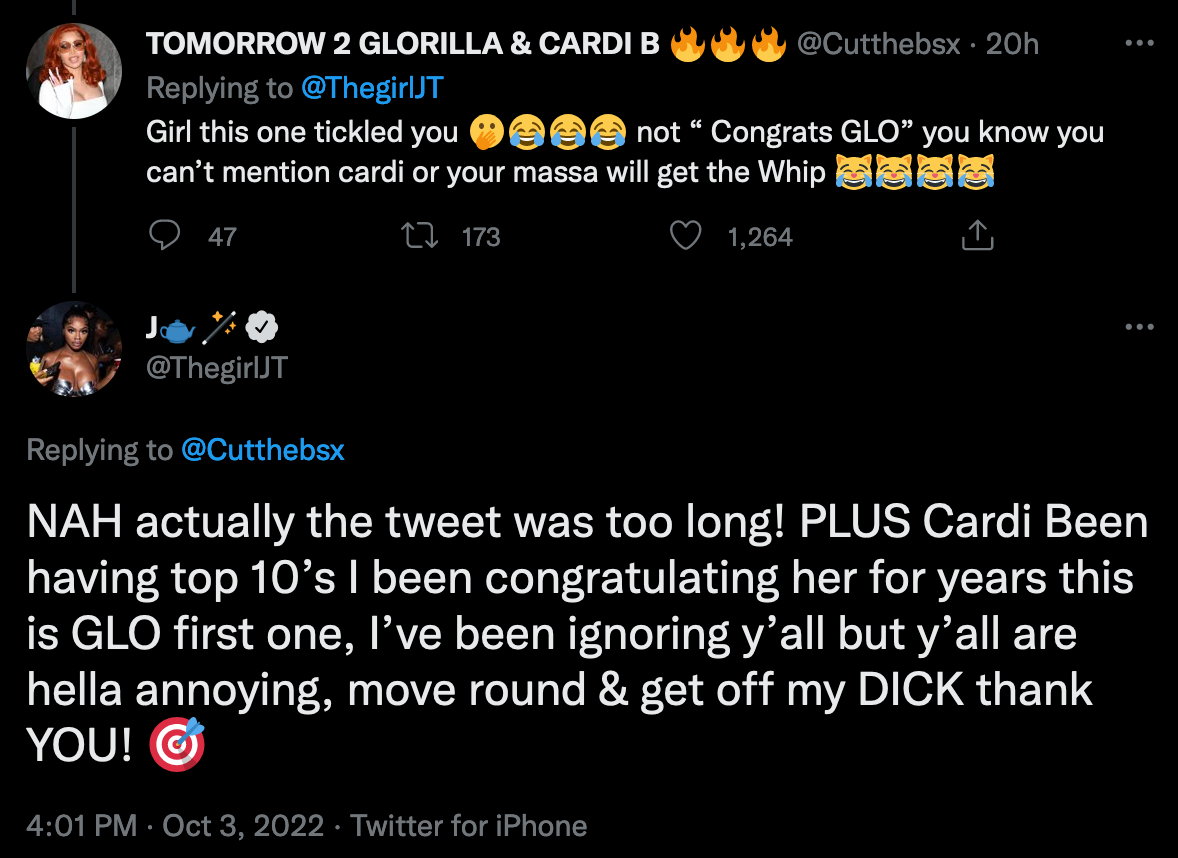 In response to a Twitter user, JT said she didn’t mention Cardi because the tweet was too long.

”NAH actually the tweet was too long!,” JT tweeted. “PLUS Cardi Been having top 10’s I been congratulating her for years this is GLO first one, I’ve been ignoring y’all but y’all are hella annoying, move round & get off my D*CK thank YOU!”

”AND MY RECORDS LIVE IN THE TOP TEN,” Cardi tweeted in caps.

Following that tweet, the “Bodak Yellow” raptress wrote, “Lapdog,” which fans speculated was aimed at JT since she didn’t “@“ who she was referring to. For context, fans believe Cardi called JT a “lapdog” in reference to her newly formed friendship with Nicki Minaj.

Then, JT directly responded to Cardi, reposting her “go fetch” tweet with the response, “Cardi you go fetch a real talent! We DM’ing why you come back here to put on a show for these KIDS?”

”So wait, me and you talking in the DM woman to woman, but YOU take it to your timeline and throw shots calling me a bully and a wiener… Why you playing dumb? And YOU talking about a talent?! haaaaa! You forgot P tried to put me on wit your writer?,” Cardi tweeted in response.

Peep their exchange below:

The “Act Up” raptress popped back, “That was BEFORE you replied!!!! & said you was talking about ME! So tell the world why you said I’m a lap dog cardi!” She continued, “No you wanted our written [sic]!!! For our hooks for our sound cause you clearly have none! Ask ANY writer! I write my OWN shit!!! You know this.”

The “WAP” raptress reposted a video clip of JT saying she opened doors for a new generation of female rappers:

Then, Cardi responded to JT’s claims that she doesn’t write her own rhymes:

”I definitely didn’t…P wanted to put me in to your writers cause yall numbers make him penies [sic]……My talent speaks for it self tho,” Cardi tweeted alongside screenshots of her YouTube views.

”Shake it dropped, I tweeted her lyrics!,” JT tweeted “In the mist of a Stan made up drill war! But today was supposed to be about GLORILLA! instead you called me a lap dog nah b*tch ima a BIG DOG!! roof roof!!!!!,” she continued.

”Cardi please I’m not impressed I don’t care I’m not bout to beef with you about YouTube girl is crazy?,” JT responded. “I’m a street b*tch YouTube ain’t got me on no leash h*e, move,” she continued.

The Miami native responded to the user, “I was in jail, but also very thankful! Also never dissed her! Also never had a problem she said because I wrote her fans back the same fans she curse out like a dog! But hey I could be wrong idk.”

”Didn’t I hit you back in the DM 20 minutes ago but I gotta come on the timeline for a response?,”Cardi asked JT. “And you’re mute but steady arguing here. Like I said, this sh*t is for show. OPPORTUNISTS.”

”Maybe both our timing off, but how am I an opportunist you called me a lapdog for no f*cking reason make since! But back to the dm’s I go,” JT wrote.

The Grammy winning rapper then tweeted, “Matter fact, I’m not even doing this on the timeline! It’s becoming real repetitive for doggy treats. We already addressing it in the DM’s. GOODBYE YALL.”

She added, “You know what, the DM’s are getting more personal and it’s way beyond this sh*t. Ima stop it right here. Twitter you’re welcome for the show”

”Wait I’m back for this last tweet cause who doing anything for doggy treats??,” JT responded to Cardi. “If anything glorilla have [gave] you a BONE that you need to go feed to that dog you was posing by the pool with for hot sh*t! Fancy pants.”

In response to a fan, JT blamed fan pages for starting the feud. “Yes because I had no problem with her, wrong b*tch that was yalllllllll making a fake a** problem and she went for it.”

Peep their exchange below:

”Hot sh*t debuted higher than any song you ever dropped or been on, prison pants,” Cardi responded to JT’s tweet about GloRilla giving her a bone. “Everybody has good and bad moments but you haven’t had one since what? ACT UP?” 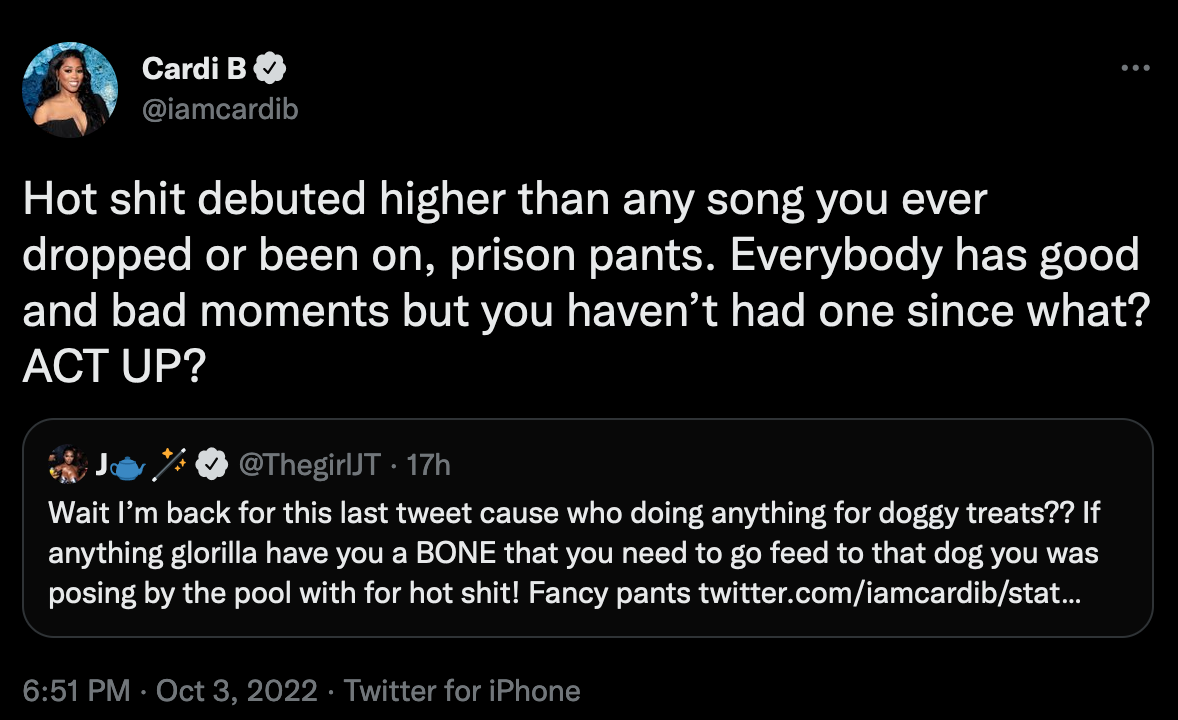 JT responded, “I wish I would ever let a chart make me feel less of a star! I literally came from NOTHING did this sh*t with a rap I WROTE on the road hitting licks! I did my time like a real b*tch & a b*tch ain’t scratch me in there & always for extra chicken on Thursday’s I ain’t never shamed. The industry not even designed for girls like me to really win! Let’s be real all this shit is politics!!! Pee always told us get that shit out the MUD grind hard I lay down because I get discouraged from all these labels paying for every mother f*cking thing. *sighs*” 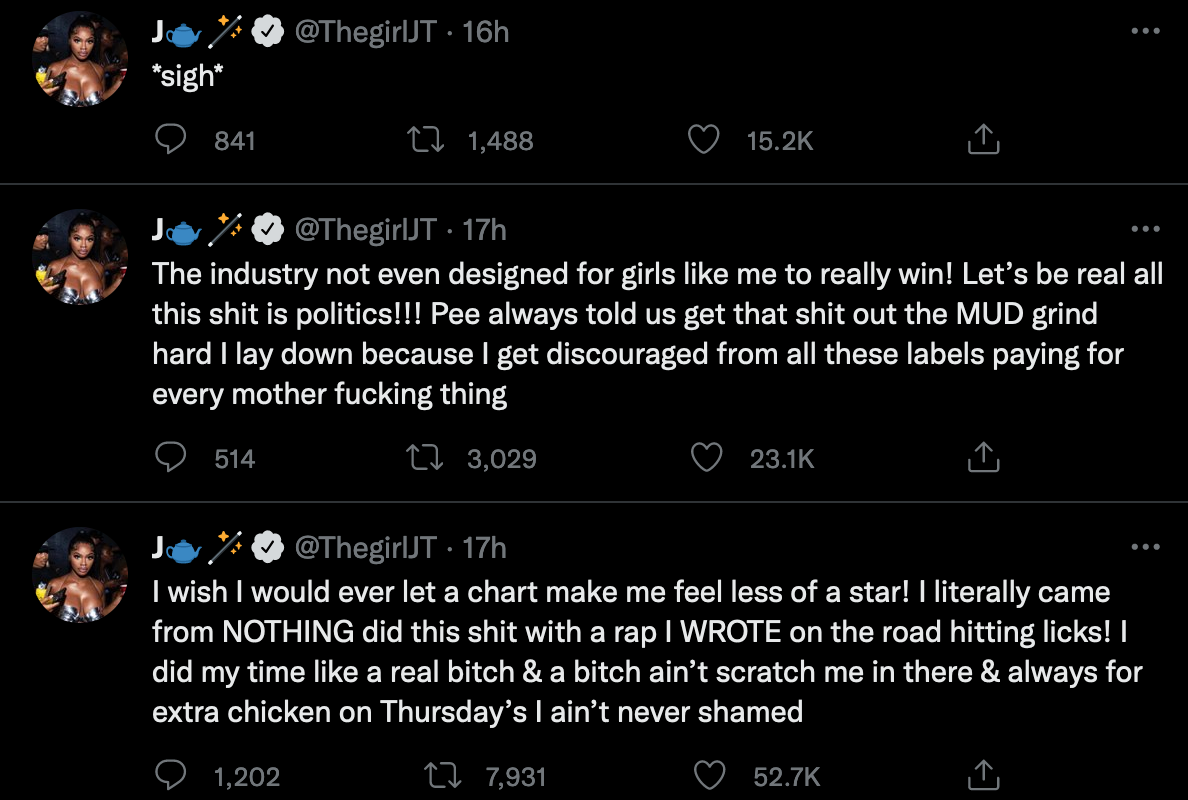 Following their back and forth, Nicki Minaj – who added JT to her “Super Freaky” Queensmix – joined the chat with subtle shade by changing her Twitter profile pic to a picture of JT.

Serving up that same energy, Cardi changed her profile pic to Remy Ma, who was involved in her own rap beef with Nicki in 2017. Check it:

The QUEEN raptress then replaced JT’s photo with a profile picture of her name written in neon lights with a pen in place of the first “I” in her name.

She might as well put her avi as a casket after Nicki ended her with this pic.twitter.com/A7LbNNRYdY

Hennessy – Cardi’s sister – added her two cents into the drama, shading Nicki for arguing with females half her age. 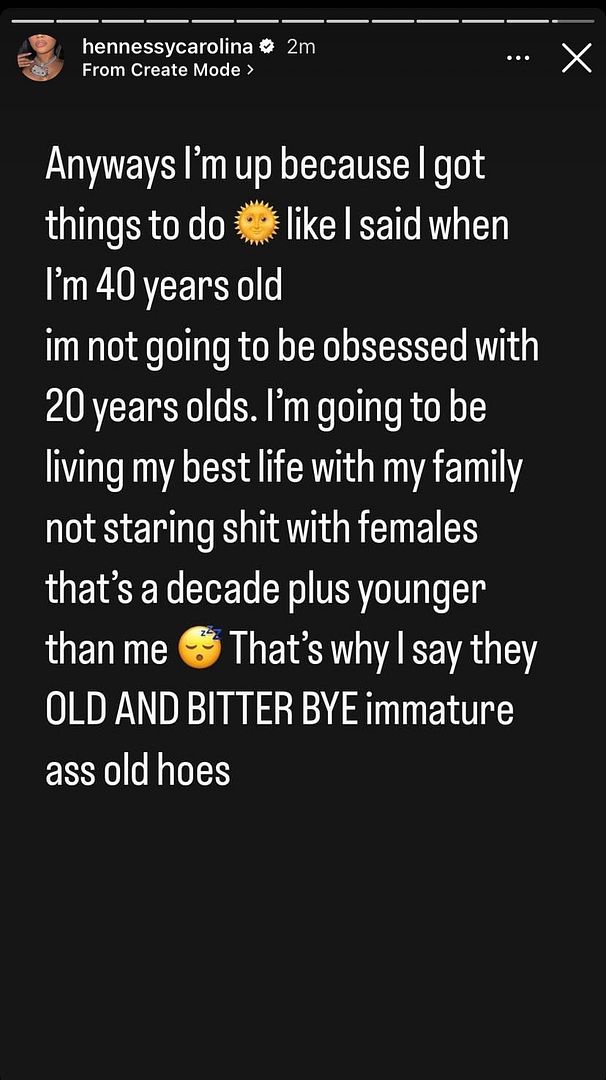 ”Anyways I’m up because I got things to do like I said when I’m 40 years old I’m not going to be obsessed with 20 years olds [sic]. I’m going to be living my best life with my family not starting sh*t with females that’s a decade plus younger than me. That’s why I say they OLD AND BITTER BYE immature a** old h*es.”

Cardi B took it a step further, posting a reel on her Instagram Stories of Noelle (aka Redbone Noe) – Nicki Minaj’s husband Kenneth Petty’s ex-girlfriend – showing off her outfit with Cardi’s “Tomorrow 2” verse playing. 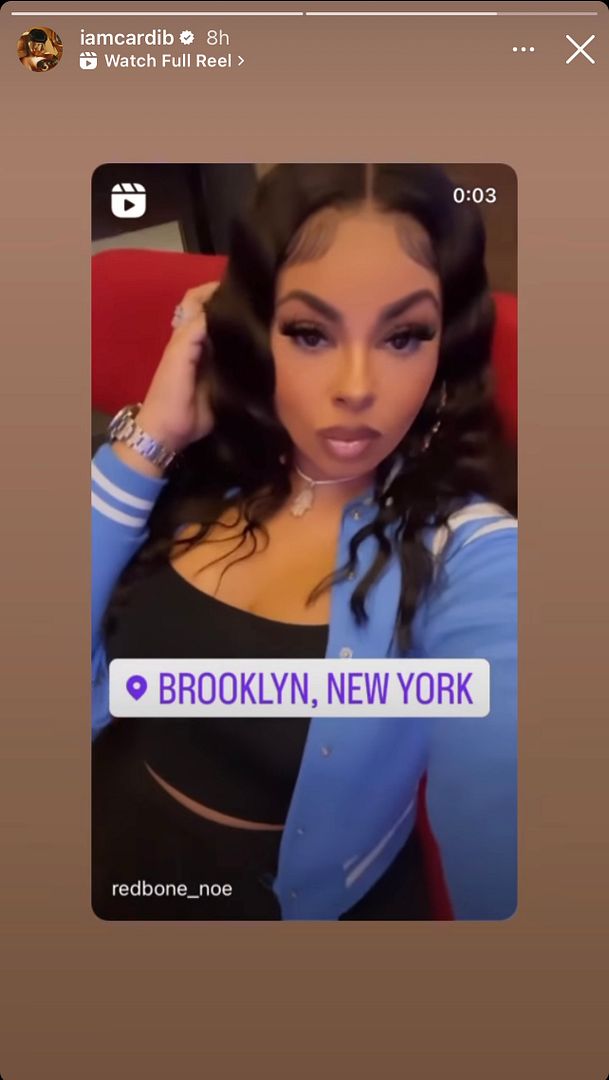