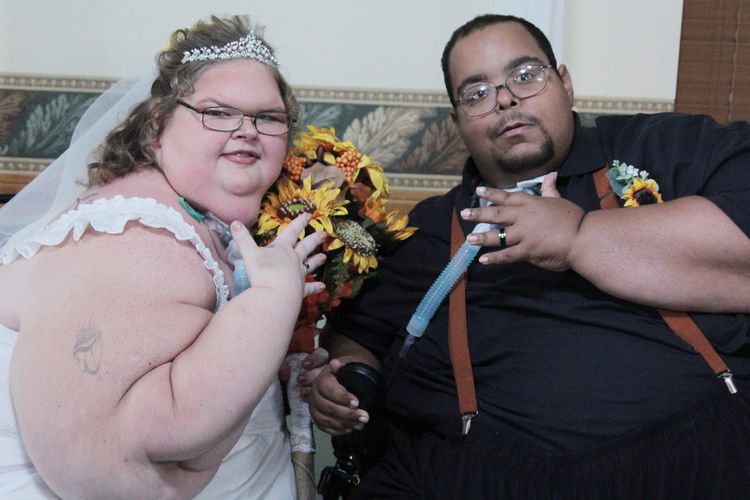 “You all knew me as Tammy Slaton, but now you’ll all know me as Mrs. Tammy Willingham,” Tammy says. “I’m married now!”

Slaton and Willingham, 39, met at the rehab center and eventually fell in love at the same location, before inviting 30 friends and family members to the small celebration on Saturday, a TLC source shares.

Photos from the Ohio wedding show Tammy in a white gown and tiara, as she poses with her sister Amy, who’s wearing an orange dress with purple hair. Another image features Tammy smiling next to Caleb, who wore a black outfit with brown suspenders on their wedding day this weekend.

In late October, Caleb proposed to his now-wife in a video shared with The Sun, which reported that the pair shared a lot of the same struggles and were a “huge support” for each other in rehab. Now, Caleb intends to move to Kentucky to spend more time with his wife, the publication reported.

Tammy and Caleb’s wedding journey will be documented in a new season of her TLC series 1000 Lb. Sisters, which premieres Jan. 17 at 9 p.m. local time.

Slaton previously had her relationship history documented on the show, such as last year when she split from former partner Philip, who her sister Amy said wanted “her to be a glutton.”

As opposed to Caleb and Tammy meeting in person, the TV star met her ex on social media and admitted Phillip was known online for talking about his preference for bigger women, and that he didn’t date anyone under 300 lbs. But ultimately, Tammy was “tired of fighting” with him and they broke up, she said in a December episode of the series.

“Tammy told me she broke up with Phil, and I’m like, about damn time. Now you need to work on yourself. Tammy don’t need somebody that wants her to be a glutton,” Amy said on the show. “I’m hoping with the whole breakup, it don’t deter Tammy away from her weight loss, because she needs to lose this 25 lbs. The doctor gave her a goal.”

After her split from Phillip, Tammy revealed that her “door’s always open” to talking to potential partners. “I don’t talk to as many people as I used to. I am trying to be more careful,” she said. “But every day, I get a comment like, ‘Hey baby, you cute. [I] wanna take you out.’”

Less than a year later, Tammy met Caleb at the rehab center, and the rest is history.

Everyone deserves to find love — even in rehab. Congrats to them.