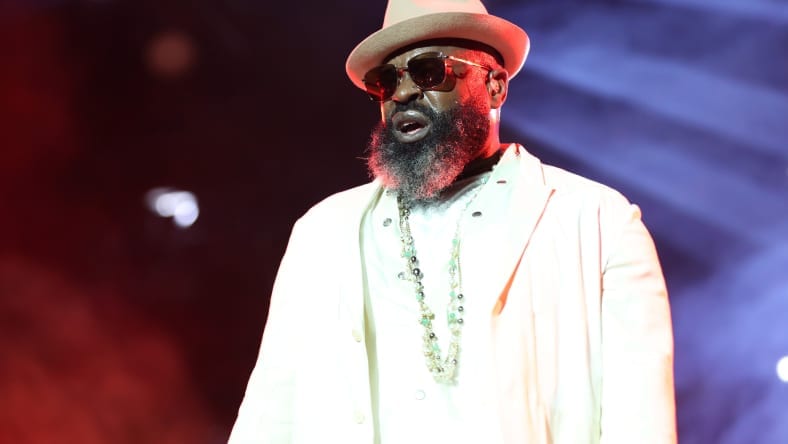 On the penultimate day of the TD James Moody Jazz Fest at the New Jersey Performing Arts Center (NJPAC) in Newark, a gathering of the most influential voices in Black art converged for an unforgettable evening of music and verse.

“Represent! A Night of Jazz, Hip-Hop, and Spoken Word” was an exquisite illustration of how each genre is interconnected with one another. The program was part of NJPAC’s City Verses initiative, which amplifies new voices in jazz and poetry.

Right from the start, the show paid homage to the Black Arts Movement of the 1960s with a voiceover and projected photograph of the beloved poet and Newark native, the late Amiri Baraka. His legacy was well represented by his son, Newark’s Mayor Ras Baraka, who was in attendance as a spoken word performer, as was Newark Councilman Dupré “Doitall” Kelly, founding member of rap group Lords of the Underground.

Baraka and Kelly’s respective presence as performers during the program was an encouraging example of how Black arts and hip-hop can penetrate politics and have a positive impact on the local community.

Speech brought the crowd of over 2,800 to its feet when he performed Arrested Development hits “People Everyday” and “Tennessee.” The MC was still in peak form vocally, as his rapping and singing sounded indistinguishable from 30-year-old records.

Bey was a late addition to the show, with original MCs Rakim and Chuck D bowing out due to illness. While the Brooklyn rapper made several appearances throughout the night, the highlight was a rendition of his popular 1999 single “Umi Says,” as Coltrane accompanied him with celestial soprano saxophone solos.

Black Thought paid tribute to the late Paul Laurence Dunbar during “Represent.” With Dunbar’s photo projected above him, the two-time Grammy winner performed one of his most famous pieces, “Sympathy.” Hearing the Philly legend recite “I know why the caged bird sings” over McBride’s ethereal funk was a revelation.

Care Moore brought Apropos along during her two performances. The best of the two was Apropos’ “So Simple.” With the soulful, Detroit-inspired crooning of Apropos bookending, Care Moore’s poetry was explosive and soothing at the same time.

The Last Poets ended both the first half of the show and the end of the program. Baraka joined during the performance of the former, as the mantra of “what we want, what we need” was chanted as he recited his words. Their final appearance found them offering one of their most enduring statements, “When the Revolution Comes.”

It was fateful that “When the Revolution Comes” was one of the final performances of the night, as it was preceded in the second half by all the participants joining together in a round-robin of the late Gil Scott-Heron’s “The Revolution Will Not Be Televised.”

The centerpiece of the entire night came from Giovanni. The legendary poet and professor ignited a raucous standing ovation as she offered her poem, “Ego Tripping,” particularly the line, “I am so hip even my errors are correct.” She then made a surprise move by singing Bobby Darin’s “Night Song,” which she said was “Nina Simone’s favorite song.”

With tenor saxophonist Javon Jackson playing behind her, Giovanni’s singing was full of vulnerability, innocence and sincerity.

“Represent! A Night of Jazz, Hip-Hop, and Spoken Word” was a perfect appetizer for the likely influx of nationwide live events commemorating hip-hop’s 50th anniversary in 2023. It was a pleasant reminder how much the three arts go hand-in-hand.

Matthew Allen is an entertainment writer of music and culture for theGrio. He is an award-winning music journalist, TV producer and director based in Brooklyn, NY. He’s interviewed the likes of Quincy Jones, Jill Scott, Smokey Robinson and more for publications such as Ebony, Jet, The Root, Village Voice, Wax Poetics, Revive Music, Okayplayer, and Soulhead. His video work can be seen on PBS/All Arts, Brooklyn Free Speech TV and BRIC TV.