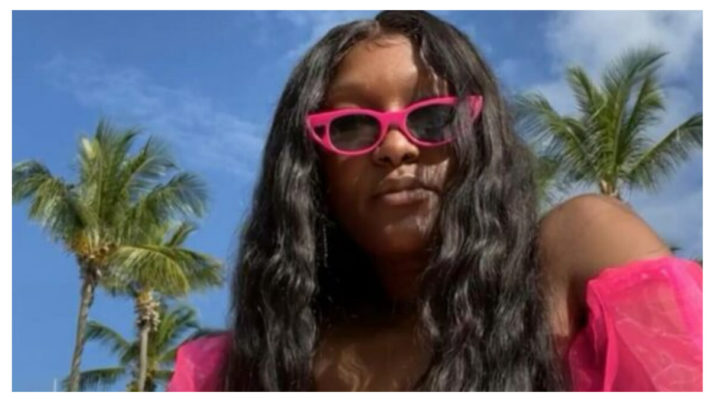 “It feels really good to see the help coming in,” Salamondra told NBC News. She said she doesn’t believe Robinson’s death would have gotten so much attention from authorities and media outlets if it weren’t for Black social media users highlighting the case.

“I never thought she wouldn’t get justice because we were going to try to go all the way,” she added. “But I appreciate everything that everybody’s done, however you’ve played a part in it.”

Robinson, of Charlotte, North Carolina, was found dead at a villa in Cabo San Lucas on Oct. 29. Her death, first reported by local news outlets in North Carolina and Black-centered blog sites, was heart-wrenching to Black social media users. Robinson was vacationing with six friends at the Mexican resort, arriving on Oct. 28. She was dead less than 24 hours later with friends claiming she had alcohol poisoning, the family said. However, a video later surfaced allegedly showing Robinson being physically attacked in a room. NBC News has not verified the video is of Robinson.

Posts about Robinson’s death went viral on Twitter, Facebook, Instagram and Tik Tok. Now, less than a month later, her family, social media users and experts are acknowledging the power of Black social media support, saying it was crucial keeping attention on her case.

“Social media has been around and has been used as an amplification and social justice tool for almost a decade,” said Sherri Williams, a professor of race, media and communication at American University. “Black folks know that mainstream news media has a history of completely ignoring our stories. So we’ve been using these tools to amplify our stories ourselves. And it works! We see this cycle of mainstream news media basically following the chatter on Black social media.”

According to Queen City News, based in Charlotte, authorities initially said there was no evidence suggesting Robinson had been murdered. However, her family told news station WBTV of Charlotte that an autopsy report states that Robinson’s neck had been broken and her spinal cord cracked. NBC News has not independently verified the autopsy report. Now, the FBI in Charlotte is investigating and Mexican authorities reportedly told The Daily Beast that the death is currently being investigated as a homicide.

People have shown their support in ways beyond social media. A GoFundMe for the family has raised more than $363,000. And on Saturday, hundreds of family, friends and supporters gathered for Robinson’s funeral.

Salamondra Robinson said all this may not have happened if it weren’t for the scores of Black social media users calling for a larger investigation.

“Everybody’s helping out,” she said, adding that she’s been “sick to my stomach” about her daughter’s death. “I appreciate the ones working so hard to get justice done. We’re not done yet, but we’re going to get there.”

I can’t comprehend that a Black woman goes on vacation with “friends”, dies mysteriously, and federal & local authorities move at a glacial pace to investigate. Very unsettling. If #ShanquellaRobinson were a white woman, this would have been front page news WEEKS ago.

Ayo Black Twitter, the way we came together to expose the animals that did this to #ShanquellaRobinson is pure fvkcing beautiful. Make them UNCOMFORTABLE asf!

The unity + resourcefulness is a beautiful sight to see! ? pic.twitter.com/wKe94KHcFT

Grown as men sitting there watching women fight and recording it. Talking about “at least fight back”.

You should be ashamed of yourself. Every last one of you that was in that room.

All “friends”, ain’t your friends.#ShanquellaRobinson

i need y’all to stop saying “be careful who you call friend” because it’s very victim-blamey to me. like she wasn’t careful.

people can just be evil, you know. despite you doing your due diligence, harm can still befall you.#ShanquellaRobinson

For them to beat that girl like that and tell her to fight is just disgusting. Just broke my heart. This is why I put the phone down for days at a time. Tears. #shanquellarobinson

#ShanquellaRobinson won’t be with her family today. I’m so sorry that her family is not only mourning her, but has to deal with just how cruelly and brazenly she was taken from them.