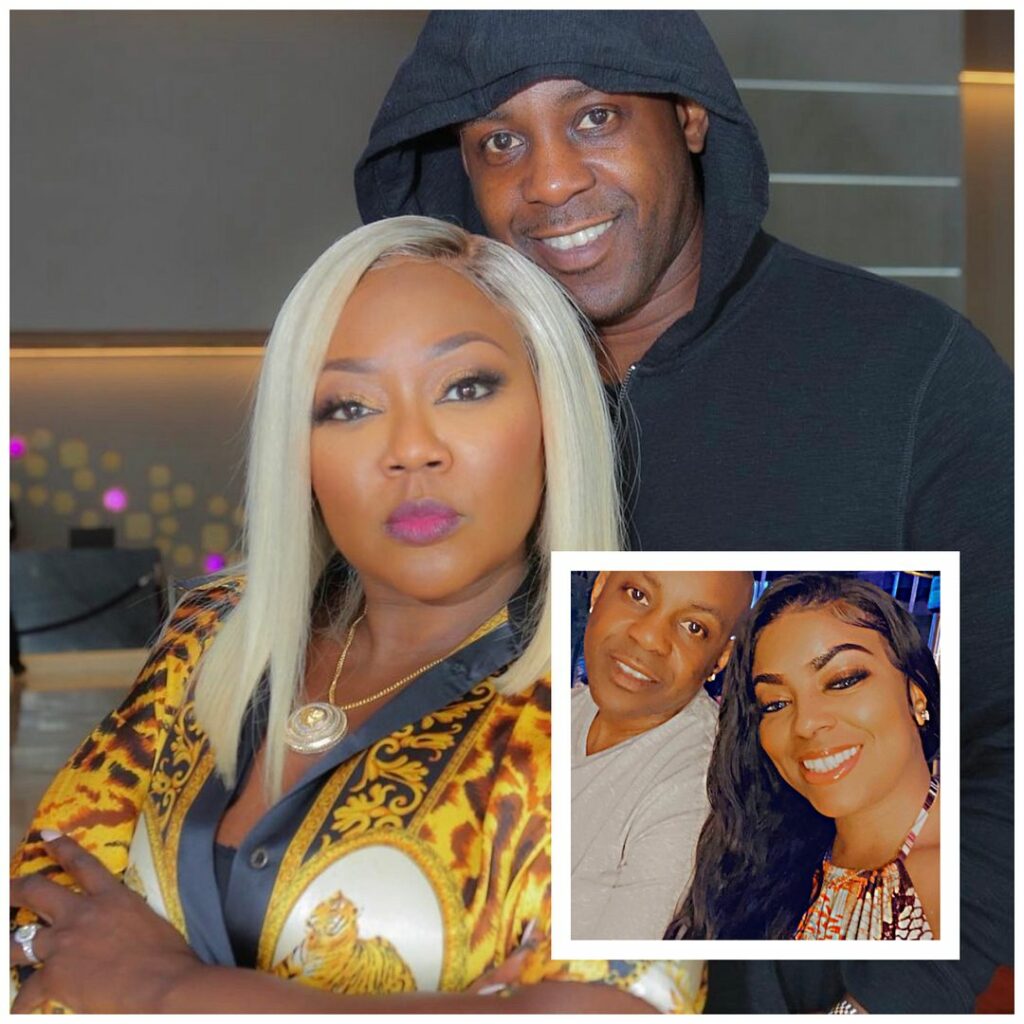 A woman took to social media to reveal she’s the alleged mistress of Rocky Bivens, husband of XSCAPE singer LaTocha Scott. Not only that, she claims she’s pregnant with his child and shared a sonogram receipt. Chile…

They say what’s done in the dark always comes to light.

A few days ago, a woman named Unykue Foucha took to Instagram to reveal she’s been having an affair with Rocky Bivens, the husband of XSCAPE singer LaTocha Scott. 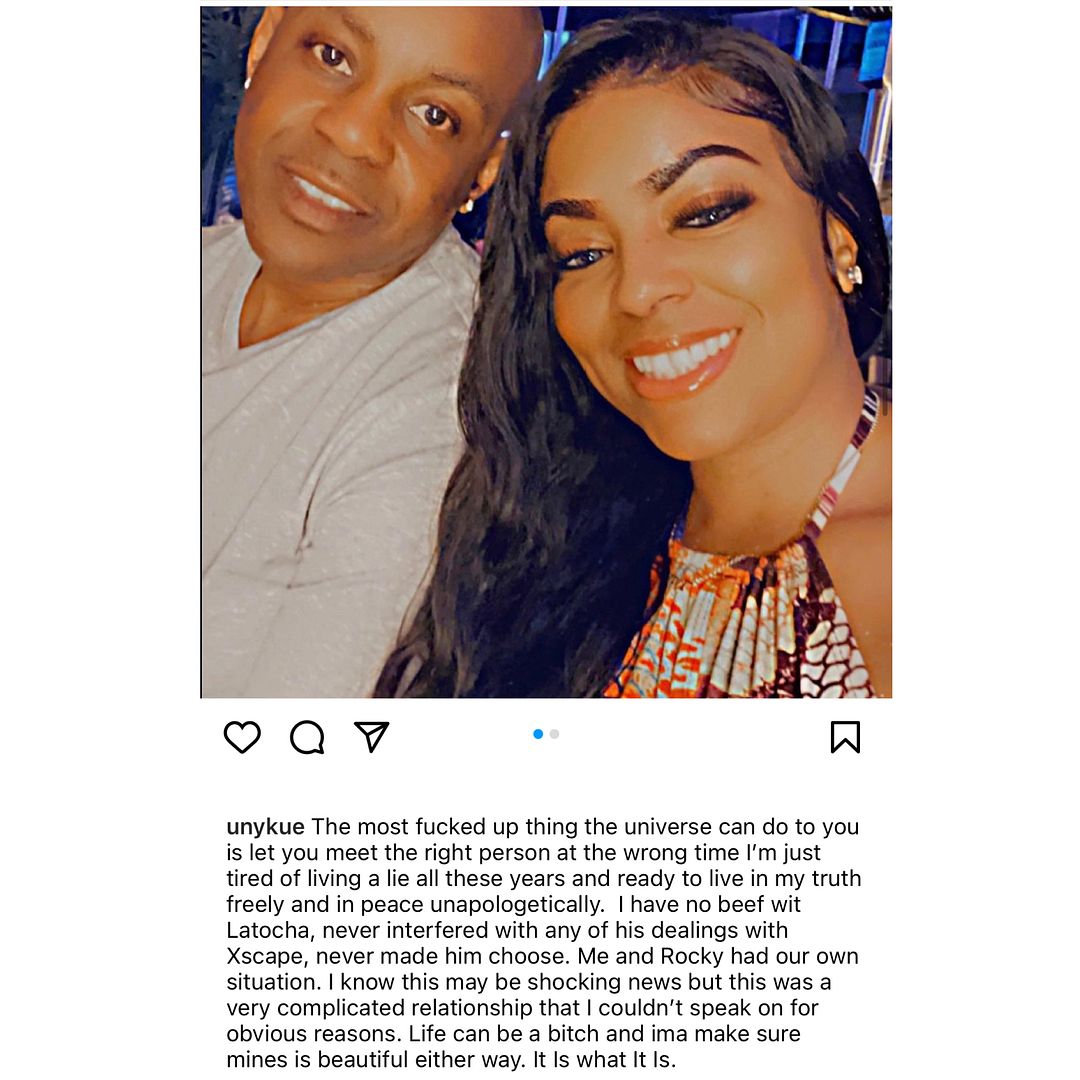 “The most f*cked up thing the universe can do to you is let you meet the right person at the wrong time,” Unykue captioned a photo of herself and Rocky (first revealed by TheJasmineBrand). “I’m just tired of living a lie all these years and ready to live in my truth freely and in peace unapologetically.”

The IG model said she doesn’t have any issues with his wife, LaTocha Scott, and that she and Rocky “had our own situation.” Oh.

”I have no beef wit Latocha, never interfered with any of his dealings with Xscape, never made him choose,” she wrote. “Me and Rocky had our own situation. I know this may be shocking news but this was a very complicated relationship that I couldn’t speak on for obvious reasons” 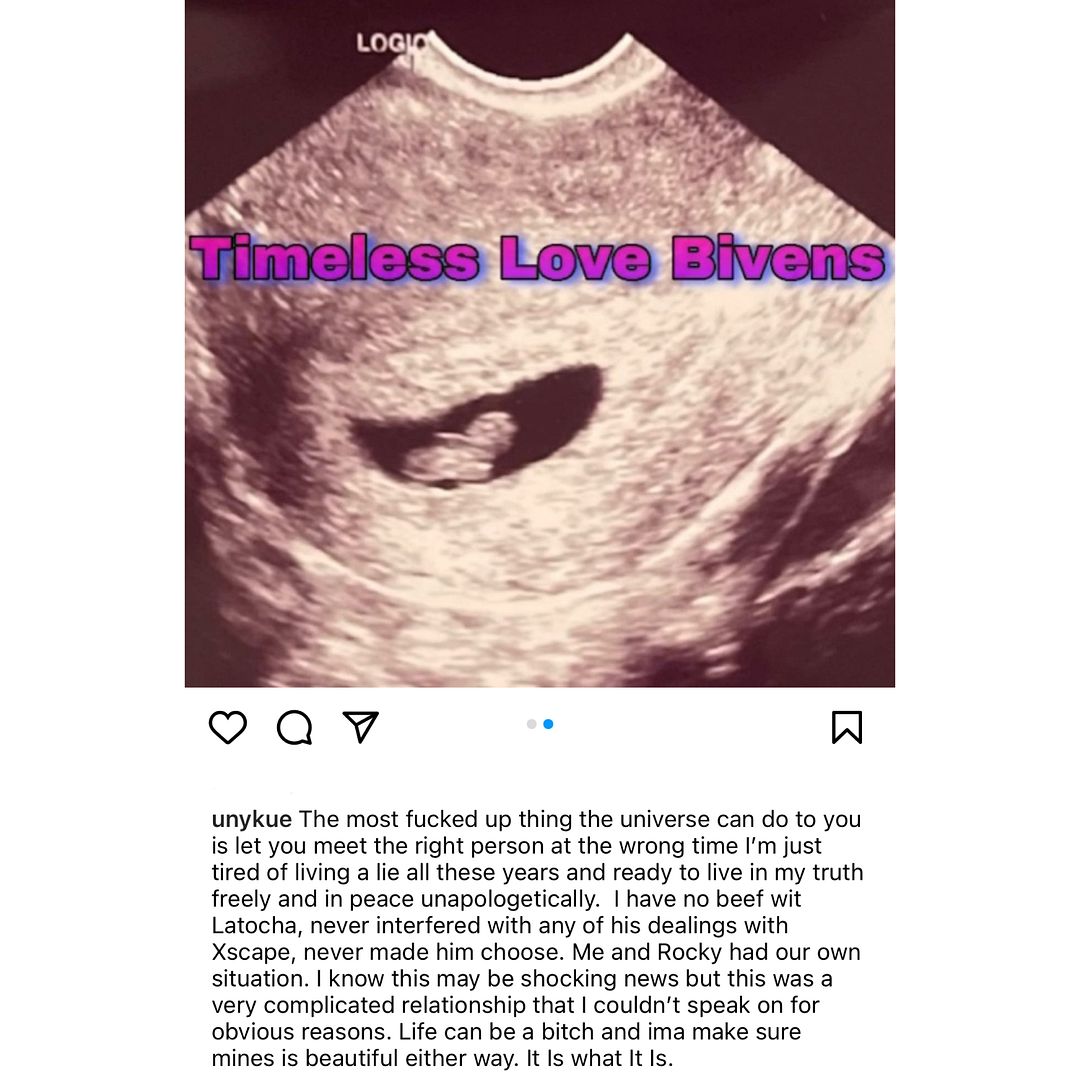 ”Life can be a b*tch and ima make sure mines is beautiful either way. It Is what It Is,” she concluded. We’d like to note, the sonogram doesn’t show the name and date the ultrasound was performed.

After people began to react to her post, she shared a message on her IG Stories: 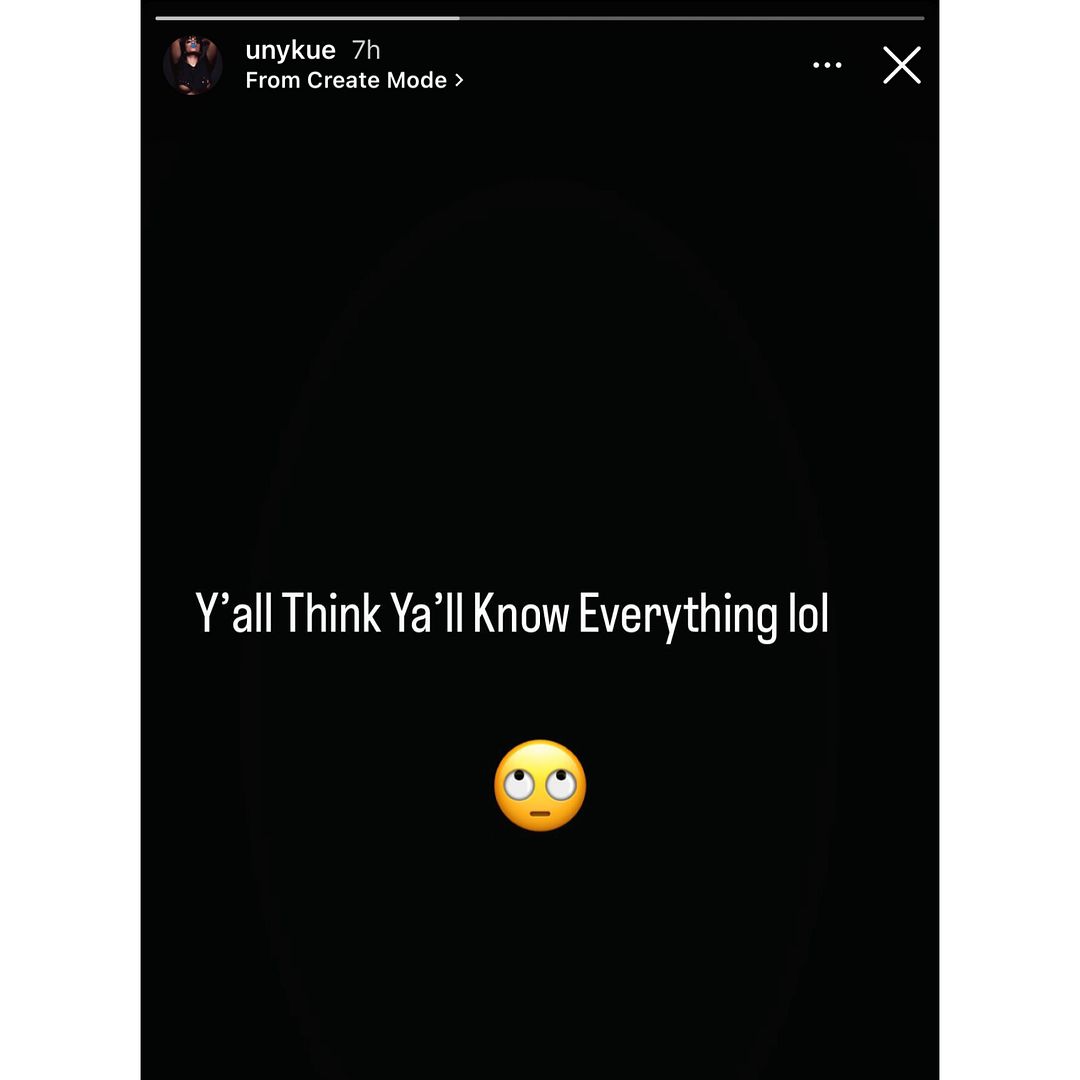 The woman appears to be involved (or is connected) in the entertainment industry in some capacity. She has shared several pictures of herself with celebrities, including Queen Latifah, rapper Trina, Larenz Tate and more, on her Instagram account: 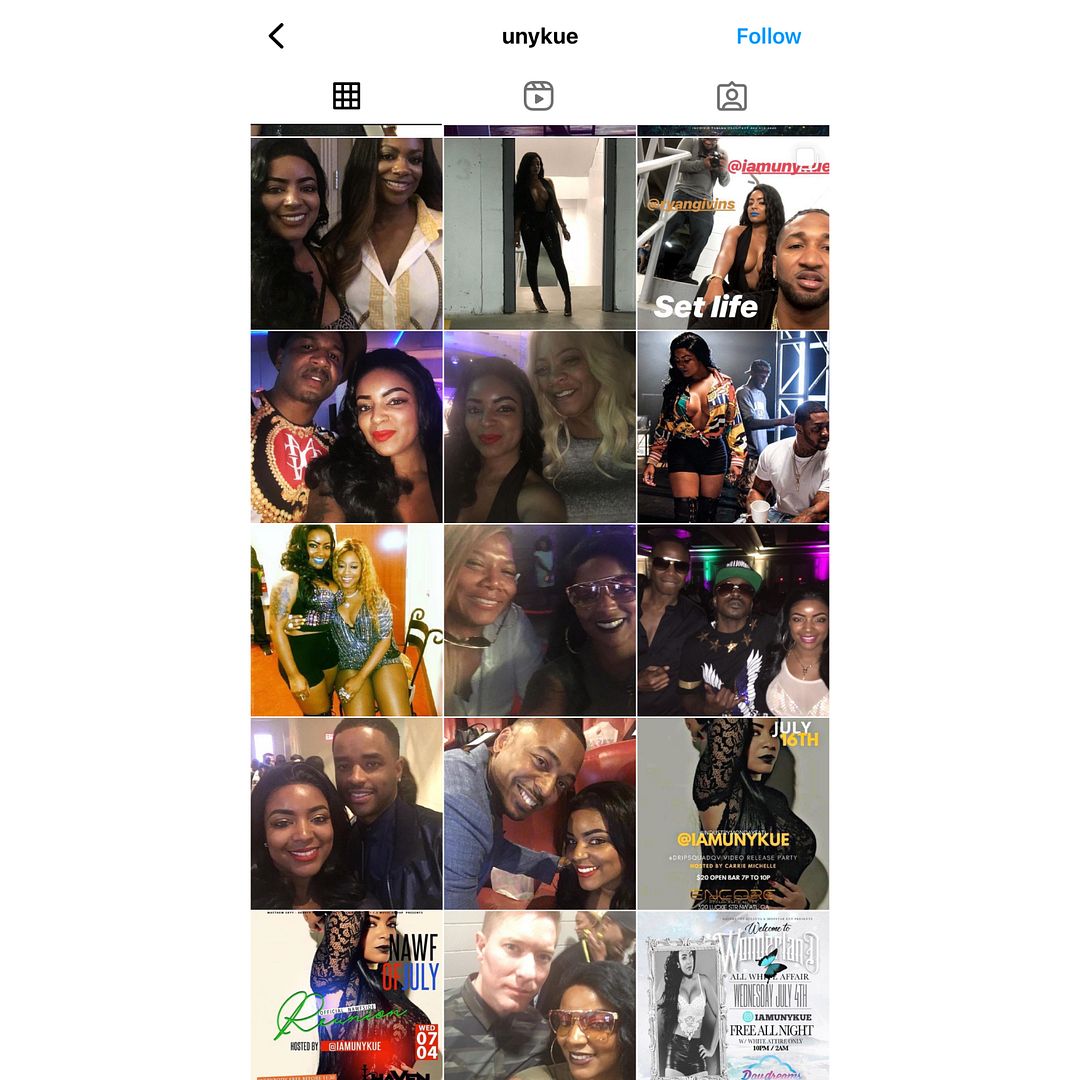 She also has a photo with XSCAPE singer/“RHOA” star Kandi Burruss that she posted in 2018: 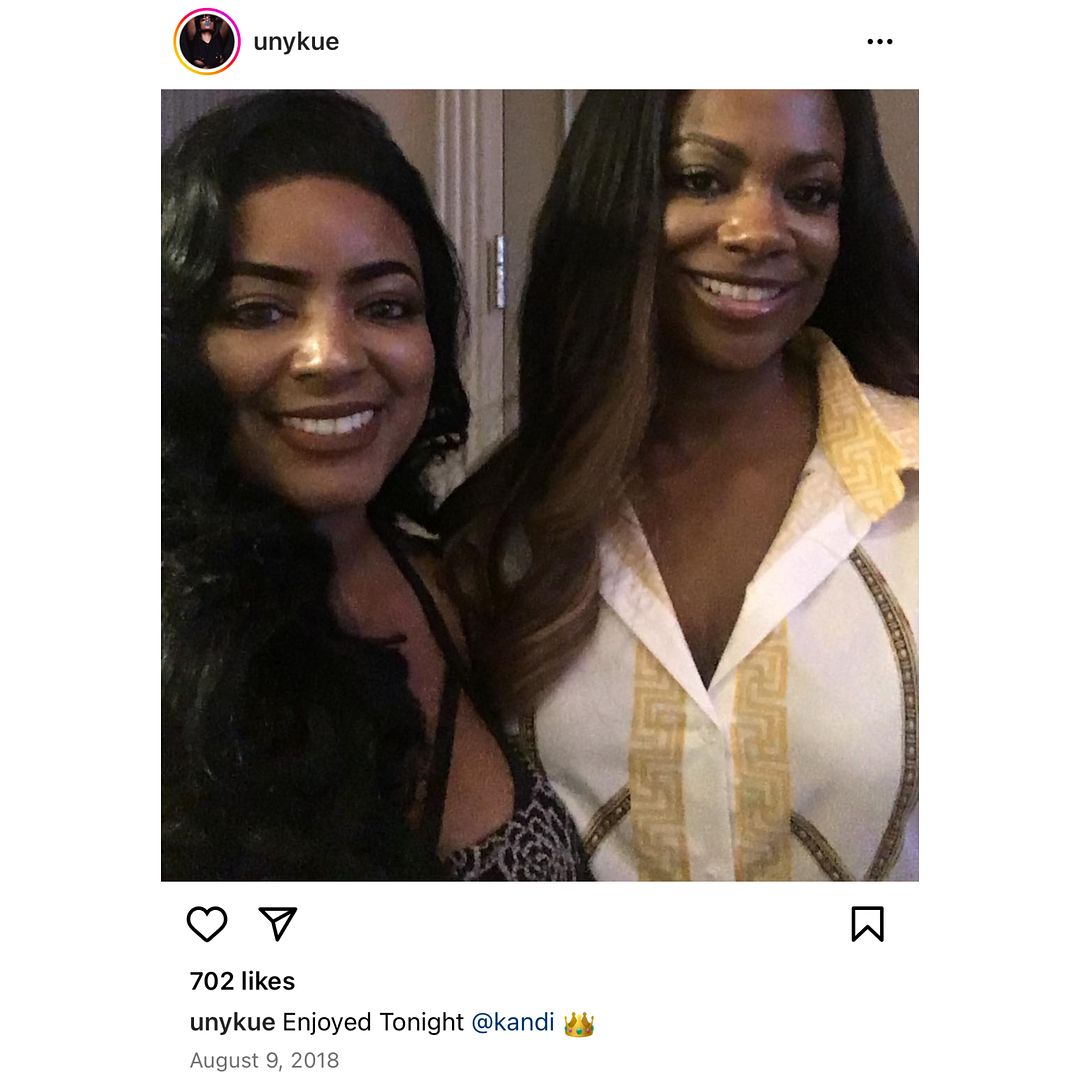 LaTocha and Rocky tied the knot in 1995 and share a son named Jamon, who is 25-years-old.

The alleged cheating scandal comes on the heels of drama between LaTocha and her XSCAPE bandmates.

First, there was “dressgate,” where LaTocha wore a different color dress than the rest of the ladies on the red carpet at the Soul Train Awards taping in Las Vegas earlier this month.

“Dressgate” launched a social media feud between LaTocha and her bandmate Kandi. See their drama below:

XSCAPE is currently on tour, however, LaTocha is not joining the group. She took to social media to explain that she was unable to join the tour due to a disagreement between her husband (who manages her) and the group’s promoter. In her post on IG Stories, she explained the promoter made a verbal threat to kill her husband, which would leave her a widow.

”The reason I am not doing the tour is because the promoter the girls are on tour with threatened my husbands life,” she explained. “The promoter then referenced getting my husband’s “headtouched” and me being a widow. Would you have gone on tour with him????? If that was any of their husbands they definitely wouldn’t have done the tour either, which I would have supported!!!! Like I told them and management, I’m available for ANY dates that doesn’t include THAT particular promoter.”

She also said her sister/bandmate, Tamika Scott, disrespected their mother on a public platform, so she hasn’t spoken to her since. It’s unclear when they stopped speaking.

As the ladies accepted the Lady of Soul Award at the 2022 Soul Train Music Awards, fans could easily see the tension between them. After LaTocha delivered her speech, Tiny came to the mic to thank “her girls,” but she only looked at Kandi and Tamika. Watch the interaction towards the end of the clip below:

I’m so happy #Xscape has been given their after all their contributions to music and the culture. We love to see it! #SoulTrainAwards #BET pic.twitter.com/jOjcOYHXwt

XSCAPE will be performing at the State Farm Arena in Atlanta on December 4th—minus LaTocha.

So, LaTocha been all about her husband and wanting the rest of the ladies of Xscape to side with them with that promoter issue and the whole time her husband was cheating on her and the woman is PREGNANT! Maybe that’s why her attitude been so nasty.

As for the alleged cheating allegations, neither Rocky nor LaTocha have addressed them. We reached out to Rocky Bivens and have not heard back as of yet.