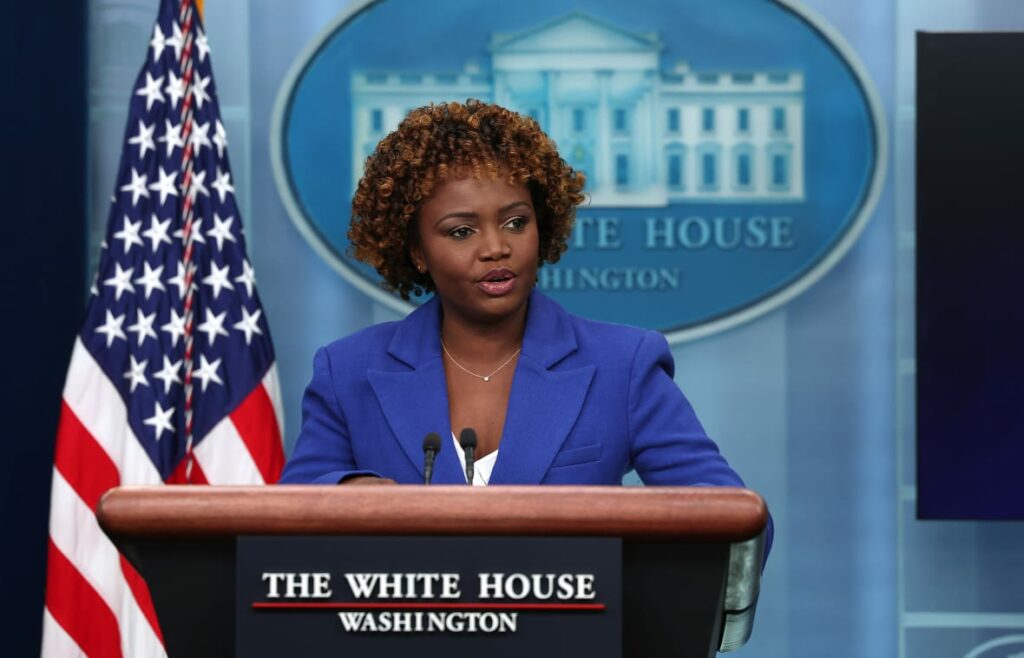 “We should all be condemning this,” White House press secretary Karine Jean-Pierre told theGrio at Monday’s press briefing.

“We should all be condemning this,” the presidential spokesperson told theGrio at Monday’s White House press briefing when asked about the Mar-a-Lago dinner during the Thanksgiving holiday.

West, who now goes by Ye, has been under fire for tweeting antisemitic views and has, in the past, spewed racist ideology against his own community. Fuentes is a known Holocaust denier and participated in the 2017 white supremacist “Unite the Right” march in Charlottesville, Virginia. Fuentes was brought to the dinner with Trump by West.

When asked if the White House was concerned that Trump, a current Republican candidate for president in 2024, was meeting with someone who fostered racist and antisemitic views, Jean-Pierre said, “I’m not going to respond to everything that happens with the former president, but this is something that’s important … that we speak very clear about and we speak very, very forcefully about.”

The press secretary said President Joe Biden “totally rejects bigotry, racism [and] antisemitism.” She added, “there is just no place for these types of vile forces in our society. And this is something that we are going to continue to deny, including Holocaust deniers.”

Trump has since downplayed his meeting with West and distanced himself from Fuentes after public backlash, saying that he did not know Fuentes was before the dinner. The twice impeached former president said he only invited West to have dinner to help the rapper and businessman amid financial ruin due to severed deals with several companies over recent antisemitic remarks.

Trump said he also advised West, who announced he too is running for president in 2024, to stay out of politics. West has since deleted a video he posted about the dinner in which he said Trump was “really impressed” by Fuentes.

Jonathan Greenblatt, the CEO of the Anti-Defamation League, told theGrio that Trump’s meeting with West and Fuentes was “awful” and “appalling.”

Greenblatt, who is Jewish, recalled that Trump “elevated extremists during the course of his first presidential campaign” and “credentialed white supremacists for his campaign events,” despite previously claiming he did not know who David Duke was when the former Ku Klux Klan leader endorsed him in the 2016 presidential election.

Even Trump’s former vice president, Mike Pence, said the former president “should apologize” and that he was “wrong” to give an audience to Fuentes. Several Republican senators also condemned Trump for the meeting.

During the Thanksgiving holiday weekend in Nantucket, Massachusetts, President Biden was asked by a reporter about the controversial dinner, to which the president said, “you don’t want to know what I think.”

However, Jean-Pierre later articulated the administration’s position on Monday, saying, “we should be very clear, very clear and say it in really absolute, clear terms … this is something that we condemn, and we will continue to speak out against.”

Greenblatt also expressed his disdain for West and his antisemitic views and his comments relating to atrocities in the Black community. “Comments he made about slavery, his choice of like to push out the White Lives Matter slogan, which is a racist slogan, and, of course, his complete deep dive into public antisemitism over the last month, I think demonstrated that he is well beyond the pale,” he said.

After losing favor with the broader public and his billionaire status over his actions, West apologized to Black people for some of his comments, particularly his statement about George Floyd not dying from police brutality, but of a fentanyl overdose.

“When the idea of Black Lives Matter came out, it made us come together as a people,” he said. “I questioned the death of George Floyd, it hurt my people … I want to apologize to hurting them [sic] because right now God has shown me by what Adidas is doing, and by what the media is doing.”

He added, “I know how it feels to have a knee on my neck now. So I thank you, God, for humbling me and letting me know how it really felt. Because how could the richest Black man ever be humbled other than to be made to not be a billionaire in front of everyone off of a comment.”

Controversial statements made by Kanye West have made their way to the White House on previous occasions, most notably when he told the world that “George Bush doesn’t care about Black people” in 2005 during a national telethon in support of Hurricane Katrina victims in Louisiana. The former Republican president years later revealed that it was an “all-time low” point during his administration.

And in 2009, after West crashed the MTV Video Music Awards stage in protest of Taylor Swift’s win over Beyoncé, then-President Barack Obama was asked about the controversy, to which Obama was caught on a hot mic calling West a “jackass.”