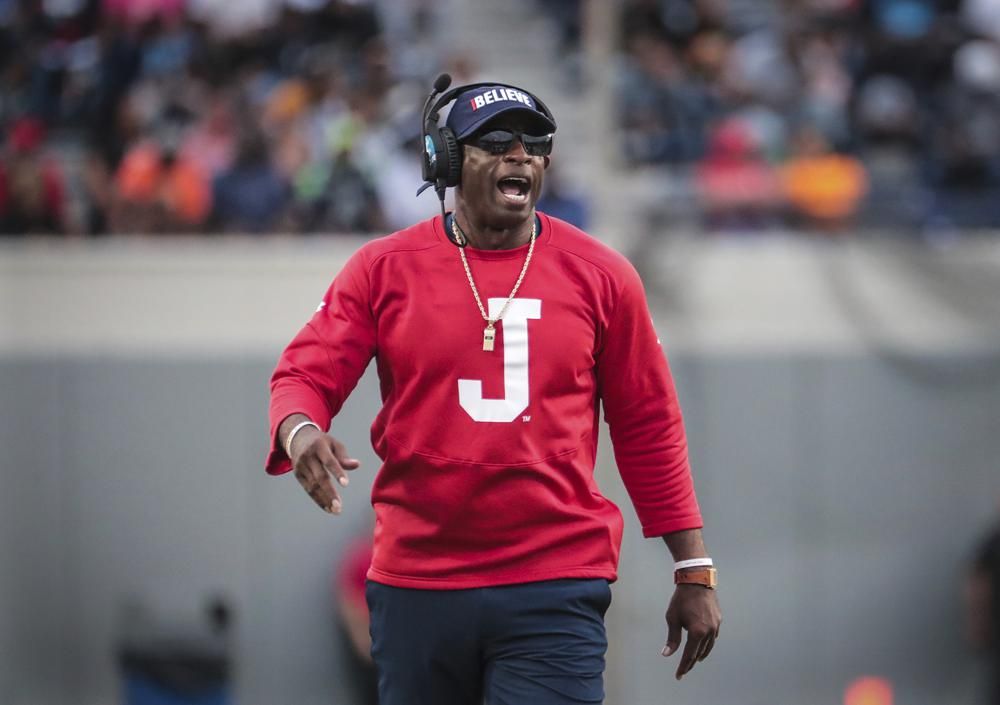 Now that there’s an offer on the table, will Jackson State head coach Deion Sanders leave for a Power 5 school? Coach Prime confirmed the University of Colorado has offered him its head coaching position. Everyone is speculating what his next move will be. More inside…

Deion “Coach Prime” Sanders took over as head coach at Jackson State University in 2020, before his first official game in February 2021. And since then, he has totally revamped the program for the better.

The two-time Super Bowl champion and Pro Football Hall of Famer led the Tigers to their first SWAC East Division title in eight years. SWAC named Sanders its Coach of the Year for 2021. Also, he has influenced the nation’s No. 1 prospect, Travis Hunter, to play for him and has brought tons of media attention to the school.

Coach Prime’s future at JSU has been called into question as rumors of coaching offers circulate.

The Jackson State football coach told reporters on Monday that the University of Colorado (a Power 5 school) has offered him the position of head coach, confirming a report from The Athletic’s Bruce Feldman on Saturday. Not only that, other schools have expressed interest in his coaching services too.

”The report is true and they’re not the only ones,” Coach Prime said on a teleconference. “I would be a liar if I told you they didn’t. You know they did. I know they did. So it is what it is.”

Coach Prime didn’t disclose what other teams reached out with offers.

“I’m not going to sit here and tell all my business, but they’re not the only ones,” he continued.

In the midst of a 1-11 season, Colorado fired head coach Karl Dorrell in October. Under interim head coach Mike Sanford, the Buffaloes finished their season with a 63-21 loss to Utah at home on Saturday. The program has made no public statements about its coaching search or confirmed an offer to Deion.

Coach Prime has openly expressed interest in coaching a Power 5 school, so it wouldn’t be a total surprise if he left. The former star wide receiver told Jon Wertheim of 60 Minutes he’s “gonna have to entertain it” if a Power Five administrator reached out regarding a vacancy.

“What happens when a Power 5 school says: Give us a number — we’ll make it work?'”@DeionSanders: “I’m gonna have to entertain it.”

Coach Prime doesn’t want the head coach offer attention be a distraction from Saturday’s game against Southern. The Tigers will host two consecutive conference championship games and have a chance to win the program’s first Celebration Bowl. However, they have to win on Saturday.

Deion Sanders jokes about the Colorado off with Rob Jay, Jackson State’s assistant athletic director for broadcasting and video services. Peep the clip above.

These two are always cutting up together.  Last month, they went viral when their banter got mistaken for Coach Prime disrespecting Rob as a reporter:

We hope he stays at the HBCU. Those boys need him.

Deion Sanders featured newswirelink newswirepartner Sports urbannewsroom
Share. Facebook Twitter Pinterest LinkedIn Tumblr WhatsApp Email
Previous Article‘They All Were Giving Us A Lie’: Shanquella Robinson’s Sister Speaks Out
Next Article Even Though Wendy’s Access to Her $10M is Cut Off – Her Ex Filed to Have His Monthly Payments Resumed | EURweb