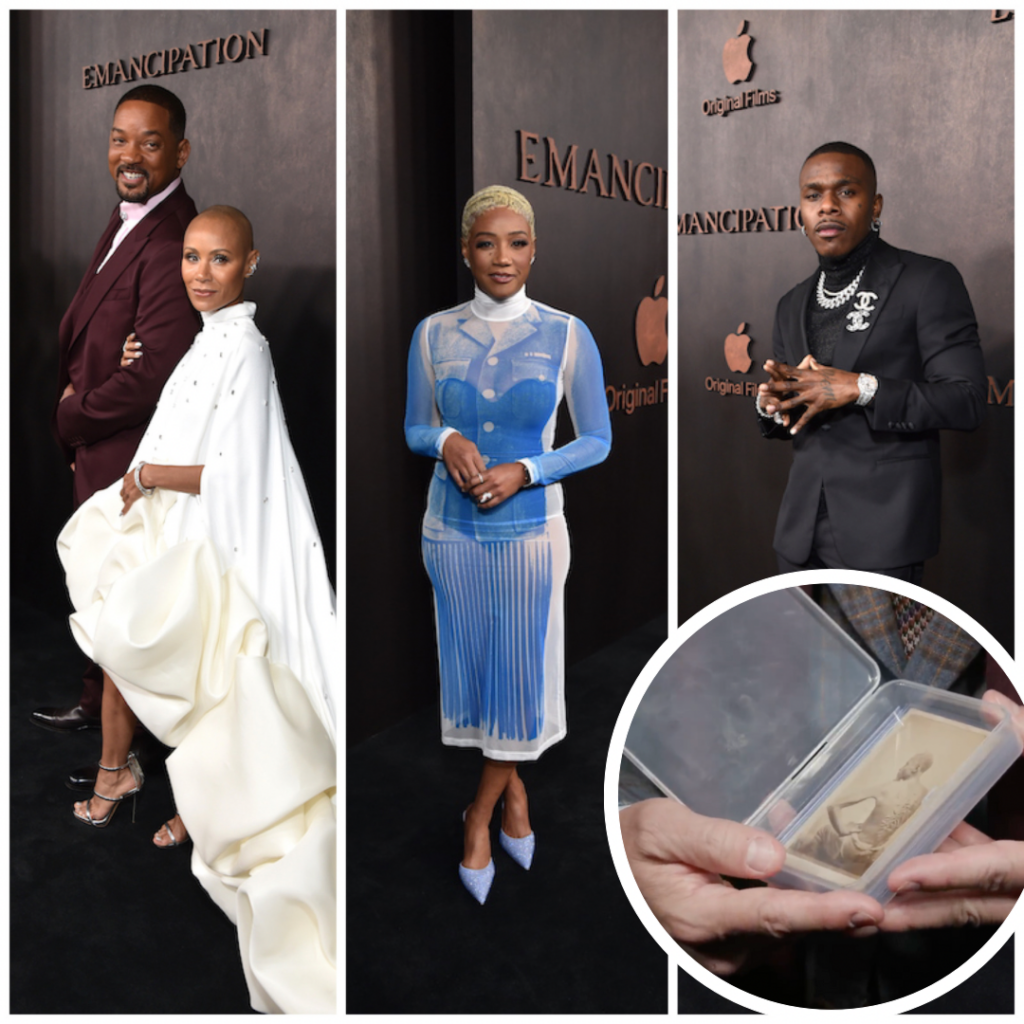 Joey McFarland, a producer of Emancipation, is being criticized for bringing the original photograph of an enslaved man, known as “Whipped Peter,” to the historical action film’s Los Angeles premiere. It doesn’t sit right with people that he’s just showing the photo off as if it’s a collector’s item, rather than treating it like an artifact. See people’s reactions, plus red carpet flicks of the film’s star Will Smith, Jada Pinkett-Smith, Tiffany Haddish, DaBaby and more inside… 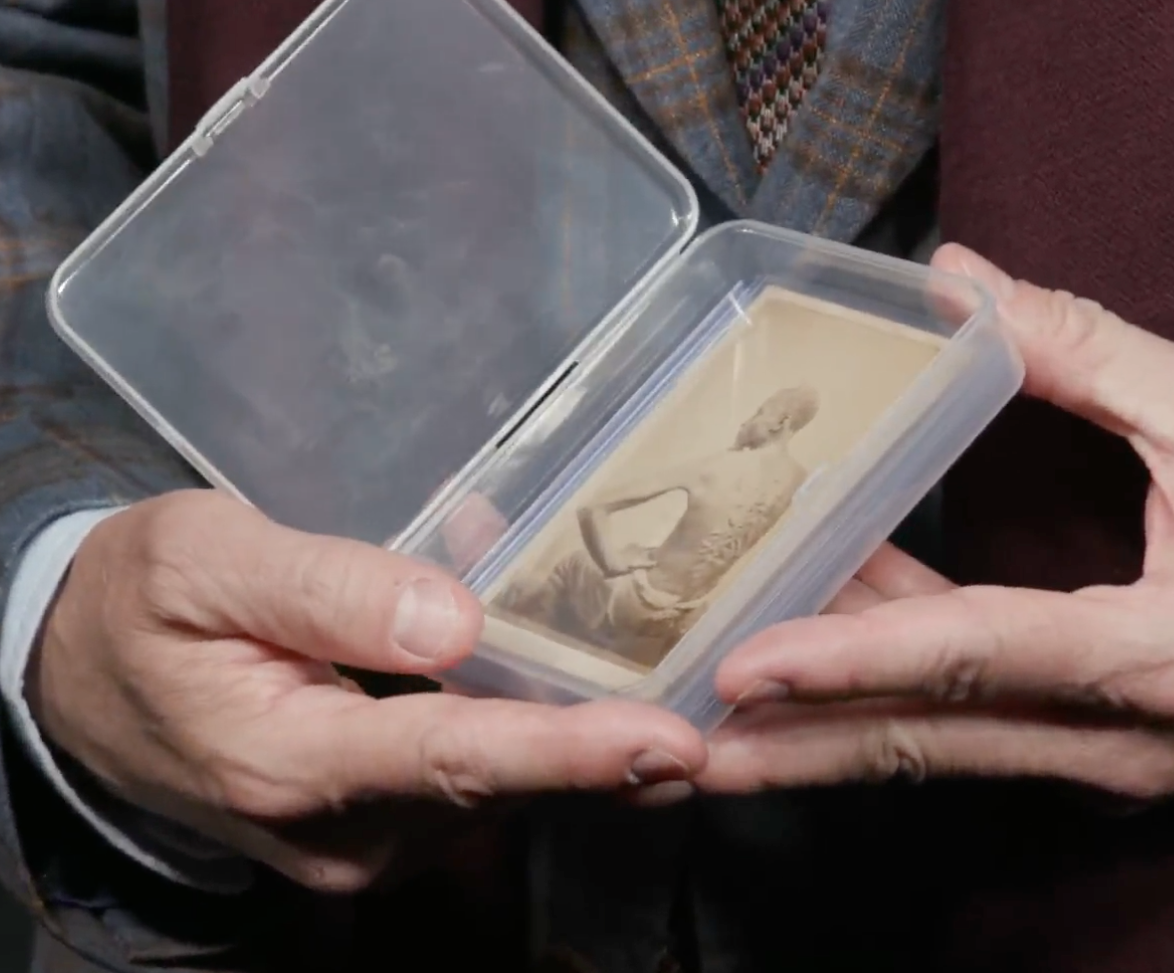 Many Twitter users have an opinion about a white producer showing off African-American artifacts that he “collected” on a red carpet as if it’s a collector’s item.

Emancipation producer Jay McFarland is getting slammed for bringing the 19th-century photo of a former slave known as “Whipped Peter,” the portrait that inspired the historical action film, to the film’s Los Angeles premiere. He proudly showed off the photo he “owned” at the event, which was held at the Regency Village Theatre earlier this week.

“I have the photo. This is the original photograph from 1863, and I wanted it to be here tonight,” McFarland, who is white, said to a Variety reporter, showing off the original 1863 “scourged back” photo.

”I wanted a piece of Peter to be here tonight,” he continued. “It’s [sad] to say, so many artifacts and photographs have not been preserved or curated or respected. And I took it upon myself to curate and build a collection for future generations.”

We wonder what “took it upon myself” is code for.

He said that he has been collecting for a “very long time” and that he plans to donate his collection for educational purposes when he dies.

“For me, my love of history, my love of truth, my love of larger-than-life individuals that had an impact on not just some people’s lives but the world, it’s worth fighting for,” he added. “It’s worth preserving. It’s worth seeking out and protecting. That’s what I sought to do. And the story that came out of that, it transcends entertainment, it transcends cinema. It is a lesson, it is a conversation that needs to start and continue and keep growing and evolving.”

#Emancipation producer Joey McFarland brought the original “scourged back” photo from 1863 to the film’s premiere: “I wanted a piece of Peter to be here tonight.” https://t.co/PUJ13jCFiD pic.twitter.com/kDJCndFJnM

FYI – “Whipped Peter’s” real name was Gordon, and he was an escaped American slave who became known as the subject of photographs documenting the extensive keloid scarring of his back from whippings received in slavery. The photo was taken when Gordon was being fitted for a uniform to join the Union Army in Baton Rouge. He ran 80 miles to get away from the Louisiana plantation where he was enslaved.

Twitter users have been sounding off, speculating how the photo ended up in his possession in the first place. Several people feel he shouldn’t have a piece of Black history to show off

Then he won’t have anything to brag about and show off to his wyt friends.

“I like to keep a picture of a enslaved African American because I’m an entitled piece of cow excrement.” pic.twitter.com/1ZKAaOSK0O

Photographs of anti-Black violence is not a collector’s item to show off. It is grossly inappropriate and Joey McFarland should donate the artifacts he “collected” to the National Museum of African American History and Culture before the end of his lifetime. https://t.co/zOXmd24NqG

Photographs of anti-Black violence is not a collector’s item to show off. It is grossly inappropriate and Joey McFarland should donate the artifacts he “collected” to the National Museum of African American History and Culture before the end of his lifetime. https://t.co/zOXmd24NqG

Please read Franklin’s thread above. The whole thing. About comic books. And then imagine it wasn’t comic books, but historical photographs of enslaved people. That someone buys & makes into a “collection” on IG. And then publicizes it right before his movie on enslavement drops. https://t.co/3fNX24SLjO

Why do you own the photograph? Why did you bring it to a movie premiere if the intent is to preserve it respectfully? You wanted “a piece of Peter” here? You collect slave memorabilia that will be donated upon your death? What do you do with it in the meantime? So many questions.

What are your thoughts on the Emancipation controversy? We really want to know how he ended up getting the original photo. Should Jay McFarland give the artifact to the National Museum of African American History & Culture? Or to Gordon’s descendants?

Back on the carpet… 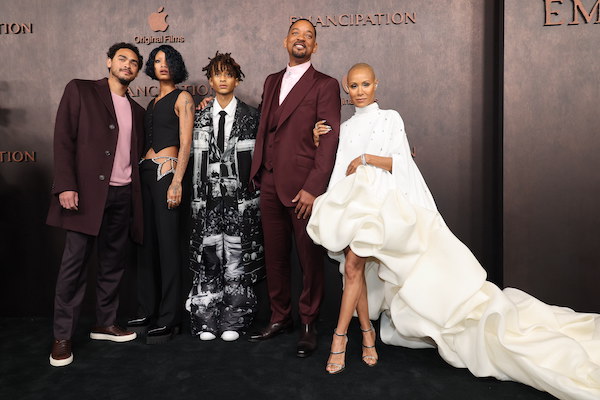 It was a familiar affair for the film’s star, Will Smith. The Hollywood actor, who recently returned to the spotlight since the infamous Oscars Slap, was joined by his wife Jada Pinkett-Smith, and his children, Trey Smith, Willow Smith, and Jaden Smith. 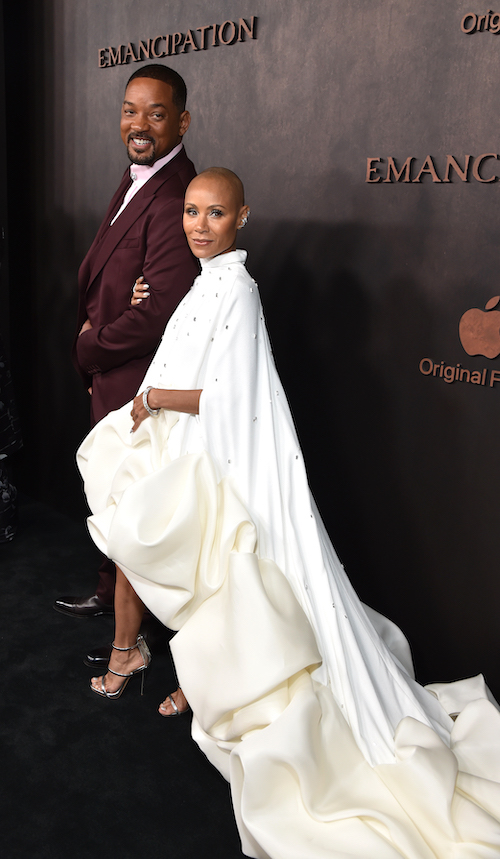 The “Red Table Talk” co-host hit the carpet in a white haute couture Stephane Rolland dress with a train. 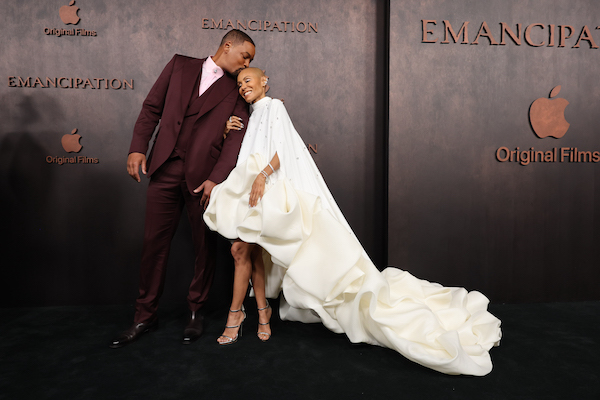 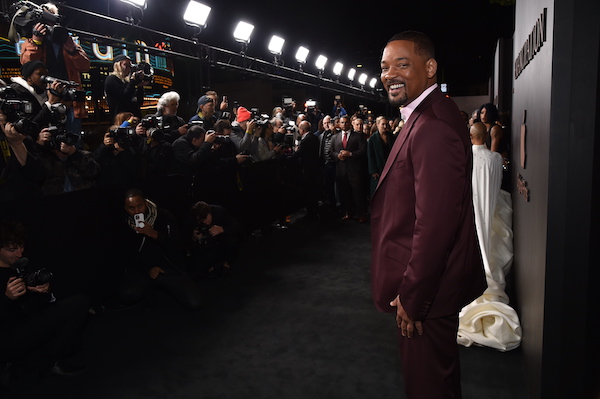 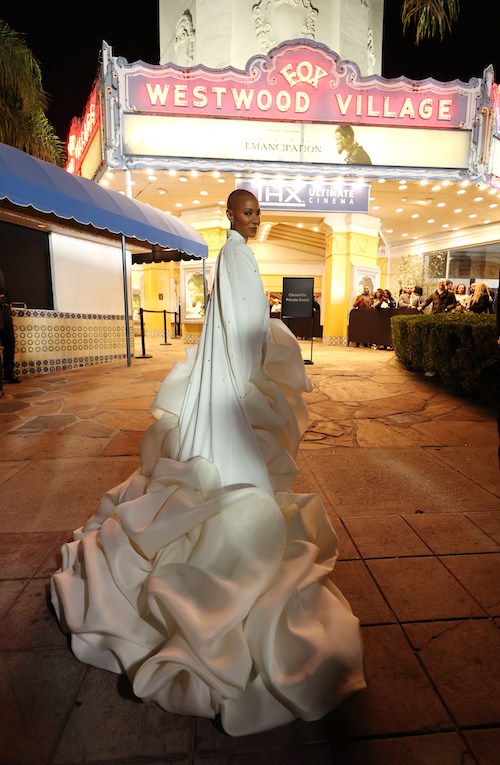 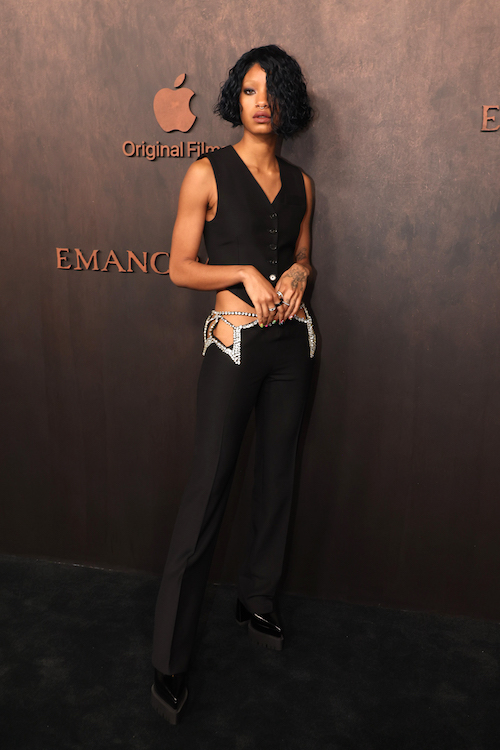 Willow Smith, who co-hosts “Red Table Talk” with her mom and grandmother, served up model poses on the carpet. 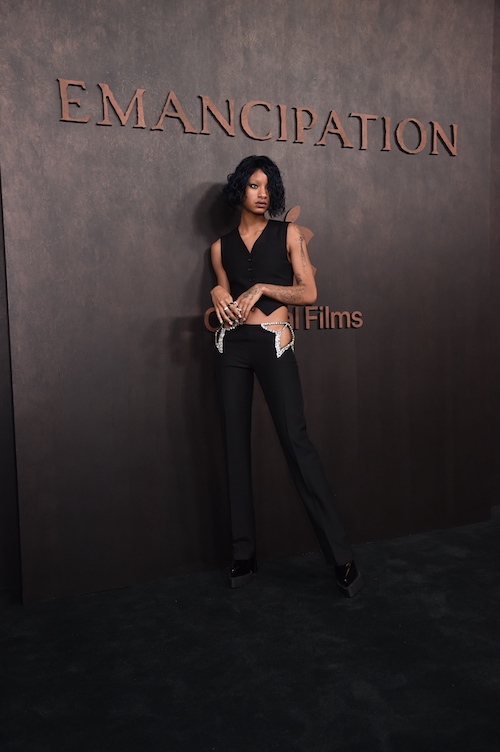 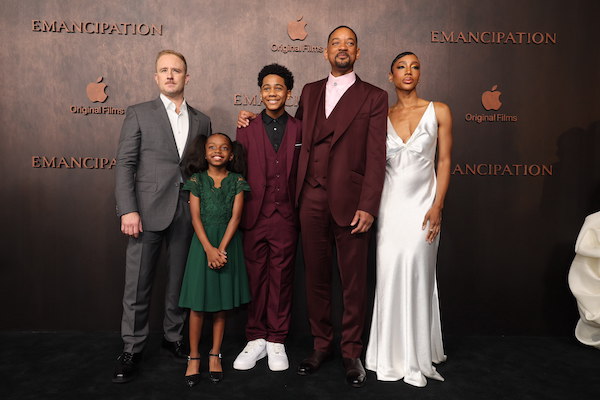 As the Oscar winner made his way down the carpet, Will snapped it up with his Emancipation co-stars Ben Foster, Jordyn McIntosh, Jeremiah Friedlander, and Charmaine Bingwa. 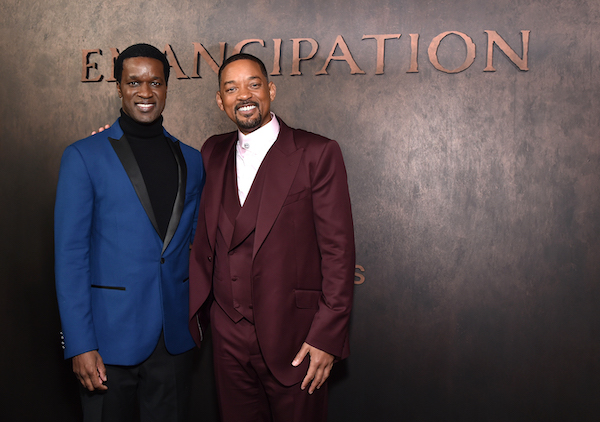 He also snapped it up with his co-star Gilbert Owuor. 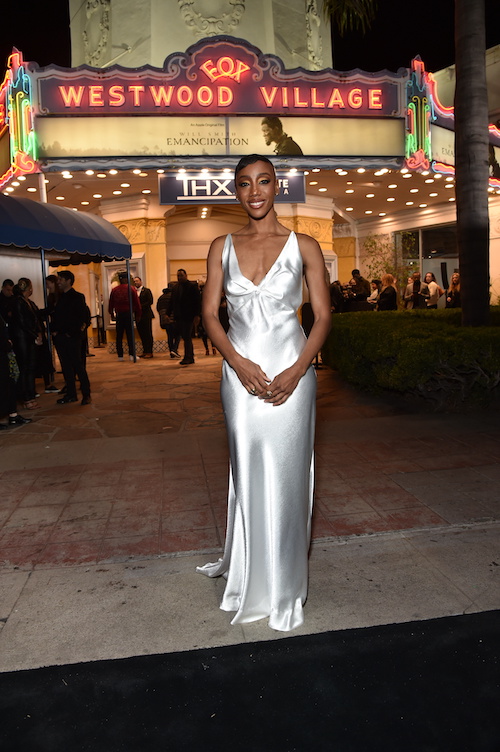 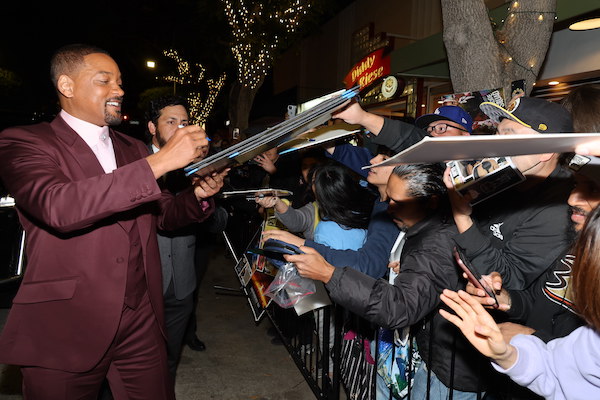 Outside of the venue, Will signed autographs. 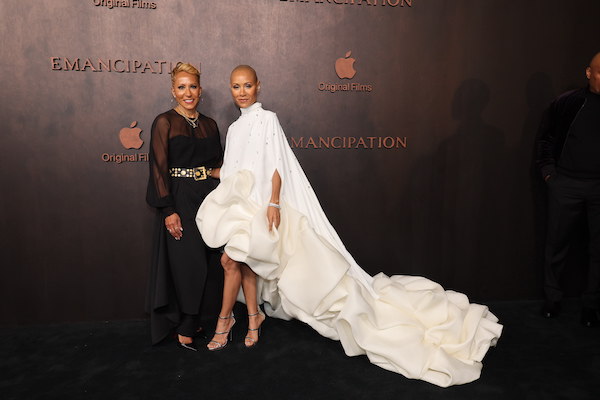 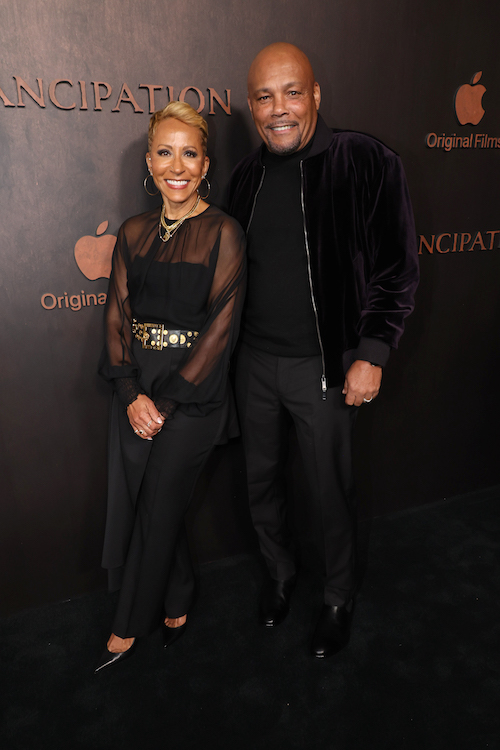 “Red Table Talk” co-host Adrienne Banfield-Norris hit the carpet with her daughter before snapping it up with her husband Rodney Norris. 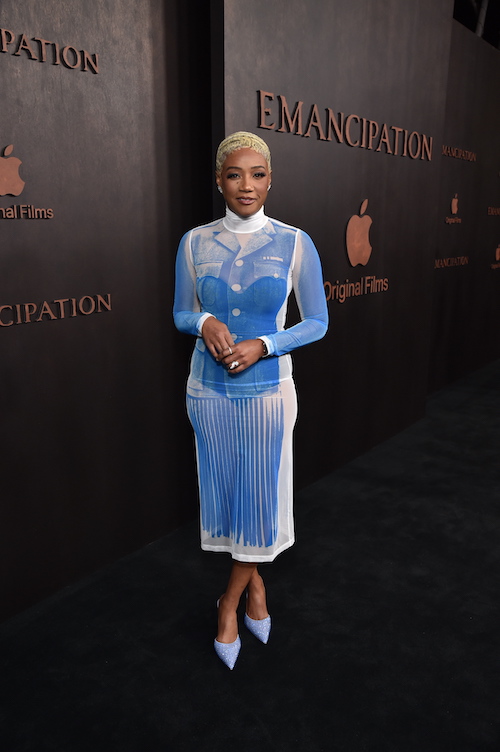 Tiffany Haddish – who starred in Girls Trip with Jada Pinkett-Smith – made her return to the red carpet to support Will.

The Night School actress, who publicly supported Will amid the Oscars controversy, made an appearance on the carpet for the first time since she and comedian Aries Spears were accused of “grooming” and sexually abused two minors back in August. The lawsuit brought against her and Aries was eventually dropped and she said she lost everything.

“I lost everything,” the EMMY winner said in September. “All my gigs are gone.” When asked if the dismissal of the lawsuit would change things, she replied, “I don’t know, bro. I don’t have no job.”

Also on the carpet… 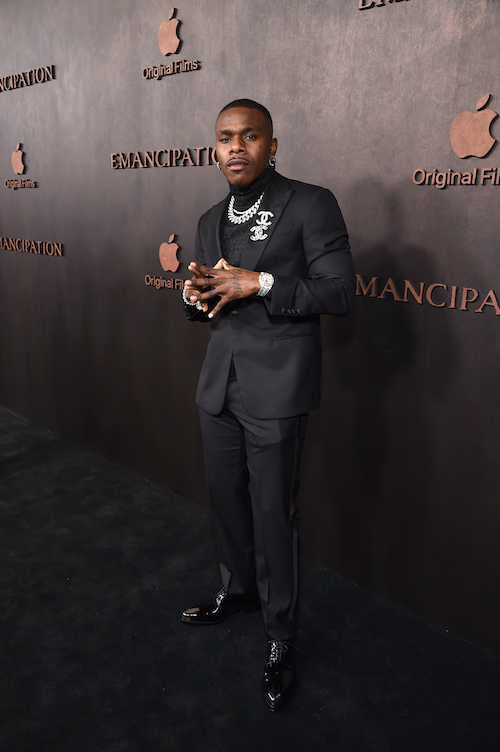 Rapper Dababy, who is rumored to be having a hard time selling concert tickets, was in the mix. 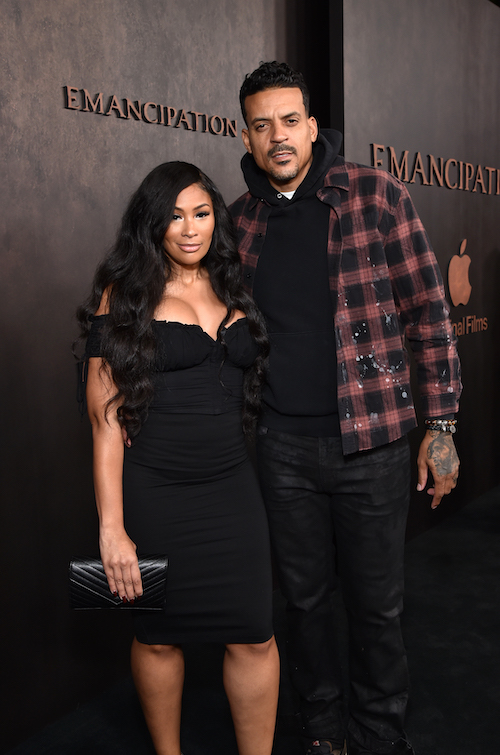