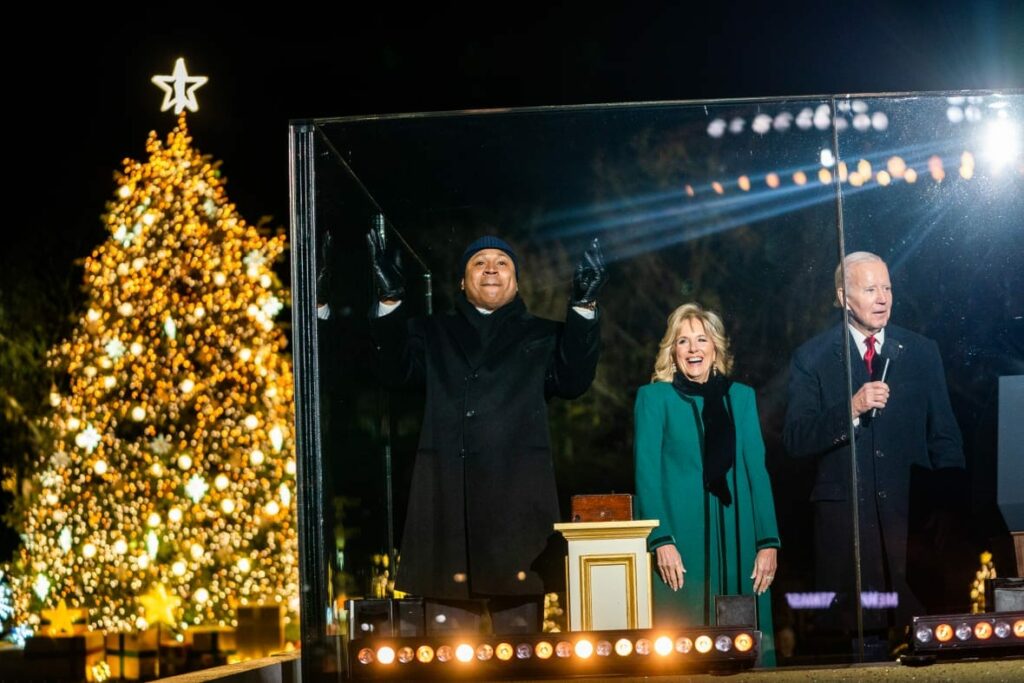 TheGrio was on the scene at the White House as the Biden-Harris administration celebrated the holiday season with celebrity and flare.

The White House this week kicked off the holiday season with some much-needed cheer, unveiling the annual festive holiday décor in the East Wing and celebrating its 100th national Christmas tree lighting.

On Monday, first lady Dr. Jill Biden made public this year’s holiday décor which was set up by more than 150 volunteers. The display is expecting up to 50,000 visitors this season, and theGrio was on the scene for a media preview. The entire wing has been transformed into a wintery wonderland with extravagant designs and ornamentation that includes 77 Christmas trees and more than 83,000 holiday lights.

Dr. Biden also announced this year’s holiday theme, “We the People,” which is incorporated in each room of the East Wing. The decorations represent what brings Americans together during the holidays and throughout the year, the Office of the First Lady noted in a press release.

The first lady tapped African-American children’s book author and illustrator, Daria Peoples, to create this year’s holiday guidebook which will be handed out to every visitor who comes to see the display this December. Dr. Biden, a longtime educator, noted during Monday’s ceremony in the East Room that Peoples is a former elementary school teacher.

Peoples told theGrio after the holiday décor unveiling ceremony that it was an “honor” to be recognized by the White House, a place she had never been until she was chosen to illustrate this year’s holiday book.

“I think sometimes we’re not quite sure what our connection with this idea of government is,” she said. “To be able to be chosen and to see that illustrating children’s books could connect you to a government that protects you and serves you is important.”

The Las Vegas, Nevada-based illustrator said she was intentional about bringing diversity and inclusion to her work. “I wanted us to see ourselves in the White House,” she explained. “It is the people’s house, and so we have an opportunity to be a part of it and to make change for it and with it.”

Peoples also incorporated the White House’s theme of centering national parks. “I put a lot of animals as well. The different state birds and also a wintery scene with children sledding,” she shared. “I think that it’s important that we be connected to nature and also take care of the planet that we’re living in.”

During his remarks, the president underscored the White House’s holiday theme, noting “We the People” are “the first words of our Constitution.”

“[It’s] enduring reminder that America has many, many strengths, but our greatest strength is America standing united,” he said. “And during this holiday season, we reflect on our blessings that, despite our differences, there are far more things that unite us as one America — common values like liberty, opportunity, dignity, respect and honor, and compassion.”

During a recent interview with theGrio, White House senior advisor and director of public engagement, Keisha Lance Bottoms, acknowledged that for many Americans, it can be difficult to embrace the holiday spirit of joy and celebration.

“You saw the lighting of the Christmas tree, you see the celebratory part of the holiday season, and you saw the president and the first lady and L.L. Cool J lighting the Christmas tree … that’s the upside that so many of us get to enjoy during the holiday season,” said the former Atlanta mayor. “But the reality is that we know that there are so many people that, during this time of year especially, it’s not a joyous time.”

Bottoms emphasized that the president has and continues to “keep those who are sometimes described as the least of these top of mind, and that’s been reflected in the policies that this White House has put forth.”

She lifted up the administration’s student debt relief program, which is currently being challenged in the court system, and investments in U.S. cities through federal funding.

In his closing remarks at the Christmas tree lighting, President Biden urged Americans to use the “sacred” holiday season to “join together with confidence in a singular American belief in anything is possible,” adding, “because that’s what I see in the American people.”