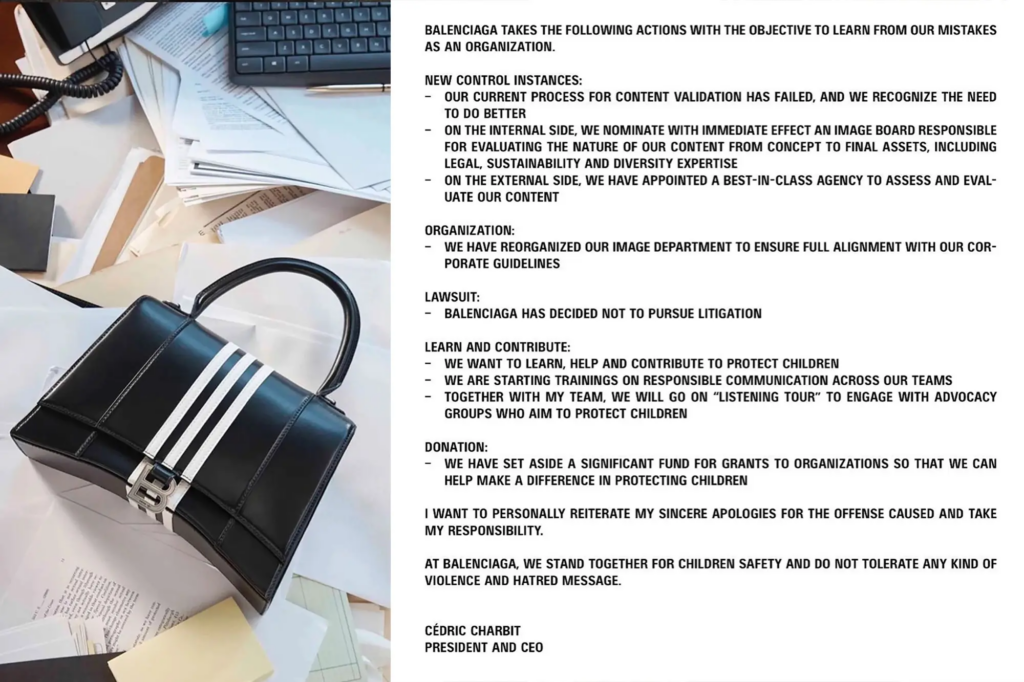 Balenciaga is dropping the $25 million lawsuit against producers of the ad campaign that landed the brand in pretty hot water.

The fashion house filed the suit a week earlier against a production company and set designer after its spring 2023 campaign included documents from a Supreme Court case about child pornography.

Balenciaga sued production outfit North Six and set designer Nicholas Des Jardins after one ad was to feature some background desk items and fake legal records from a prop house — but wound up showing a real SCOTUS ruling.

Reps for North Six and Des Jardins denied that they were responsible, and there was also an outcry from fashion pros saying the parties shouldn’t be blamed for a company’s ads.

Celeb collaborators including Kim Kardashian also chided the brand publicly over its poor judgement and lack of oversight.

On Friday, Balenciaga said it was ceasing the litigation, according to a social media statement by its CEO.

“I want to personally apologize for the wrong artistic choice of concept for the gifting campaign with the kids and I take my responsibility,” the designer wrote. “It was inappropriate to have kids promote objects that had nothing to do with them,” he continued, adding that although he wants “to provoke a thought” in his campaigns, he “would NEVER have an intention to do that with such an awful subject as child abuse.”

He added, “I need to learn from this, listen and engage with child protection organizations to know how I can contribute and help on this terrible subject.”

The company previously posted: “The two separate ad campaigns in question reflect a series of grievous errors for which Balenciaga takes responsibility.”

Balenciaga commissioned, approved, and published the ads. They had no case.