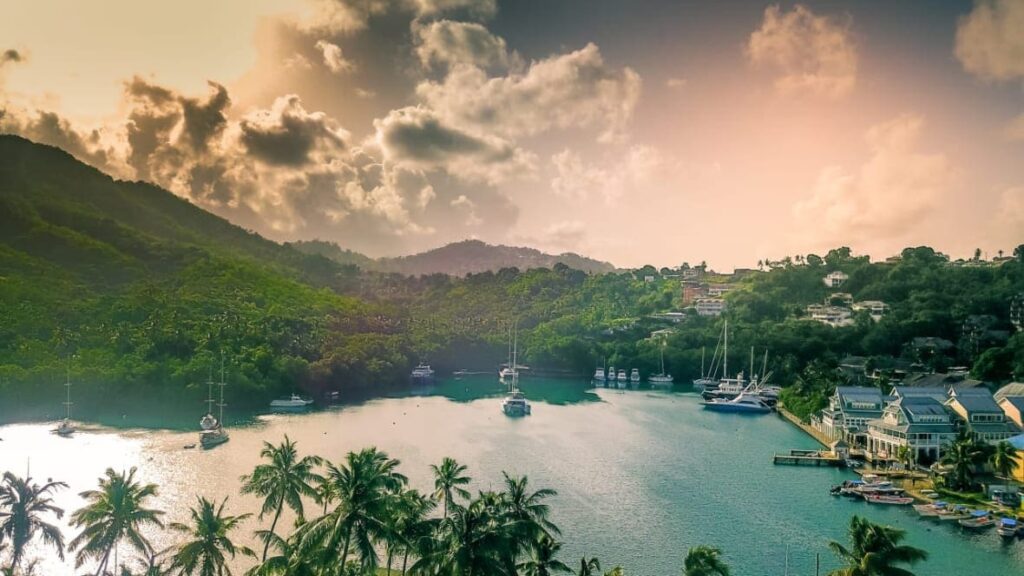 Looking for a holiday getaway? Follow our guide to romance in Saint Lucia, the only nation named after a woman due to her charm and beauty.

Did you know the island of Saint Lucia is such a beautiful and love-bombed locale it has earned the nickname “Helen of the West Indies”? A little backstory on this: In Greek mythology, Helen of Troy was considered the most beautiful woman in the world. Many suitors vied for her love and hand in marriage, but Helen ultimately chose Menelaus, King of Sparta, as her husband. However, Aphrodite, the Goddess of Love, had promised Paris, the Prince of Troy, the most beautiful woman in the world. In the absence of Menelaus, Paris and Helen fled to Troy, launching a ten-year-long war between Troy and the Greek armies trying to win her back, with Helen famously becoming known as “the face that launched a thousand ships.”

Being vastly gorgeous and strategically placed between the Atlantic Ocean and the Caribbean Sea, Saint Lucia caused a similar rift between the British and French. The two nations repeatedly went to war for the possession of the island; in totality, Saint Lucia was turned over 14 times between the two powers, earning the moniker “Helen of the West Indies.” Today, French and British influences—along with African, Caribbean, and Creole—remain heavily embedded in the island’s culture.

Saint Lucia currently stands as an independent nation, but she is a part of the British Commonwealth. If you are wondering why I dubbed her “she,” as mentioned earlier after being coined “Helen of the West Indies,” she is officially the only country in the world named after a woman, and fittingly so. Saint Lucia is beyond pretty; also charming in her slow and graceful nature, fruitful in lush vegetation, and hospitable in nutrition and offerings. Overall, she is “that girl” of the West Indies and has often proven so. If you are looking for a romantic escape this holiday or the perfect getaway to gift, book a trip and tour of Saint Lucia using our recommendations as your guide.

As a small island — Saint Lucia is about 617 square kilometers with a population of about 185,000—there are currently two accessible airports for all. International travelers typically fly into Hewanorra International Airport at Vieux Fort (UVF), located on the island’s southern end. However, the airport is a bit far from the capital, Castries, totaling a little over an hour of driving time before you reach the center of town—but don’t worry, this is part of the lure.

There is one main road to get to Castries, so prepare for the indulgence to start immediately after departing from the airport. As you journey to your stay of choice, check out the local fruit stands and baked goods stations. Or stop for a drink at Nikki’s Bar and Grill at the Dennery lookout to grab a Piton lager, the island’s signature beer—so named for its national treasures and international tourist attractions, the Gros Piton and Petit Piton mountains. Enjoy views of the island from high and low while listening to Dennery — original Lucian jazz or reggae music merging African, creole, soca, and dancehall styles — and cruise the deep curves of roads while gazing at the incredible tropical views with your loved one.

As romantic as St. Lucia is, the choice of stays enhances the enchantment. Take Cap Maison, for instance; a Mediterranean meets pueblo architecture-style luxury resort adjacent to Rodney Bay with a champagne zipline basket that makes you feel like a star in a romantic adventure. It just doesn’t seem real!

As a top wedding and honeymoon destination, Saint Lucia is ripe with adult-only resorts like StolenTime by Rendezvous, where the kids aren’t allowed. While not hedonistic, per se, you can enjoy couples spa massages and a beachside dinner before visiting the Rendezvous Champagne bar. A top evening lounge spot, its pianist will play (almost) anything you request, so you may soon find yourself swaying to your favorite romantic song.

Anse Chastanet is one of the best-kept properties on the island, nestled in the mountains with the world’s best panoramic view of the Gros Piton and Petit Piton. An eco-resort before it was even a trend, Anse’s rooms feature large octagonal open-air living spaces, so it feels like you are one with nature, lodging outside. However, you will not be short on top amenities like jacuzzi tubs, minibars, balconies, terraces, and patios with access to numerous beaches.

The multiple empires that fought over Saint Lucia are present in its cuisine. The island uses the best of French, British, Creole, Caribbean, and African flavors and techniques to create top-tier dishes that leave your mouth watering. To experience some of the best on the island, dine at East Winds Resort. Its immaculate five-course dinner menu is changed daily, so you will never be served the same dish twice. Serenading its guests with live musicians such as saxophone players, pianists, and string players on opposing nights, this resort knows how to create a delicious experience.

Jade Mountain, on the other hand, is one of the most picturesque resorts in the world. If you can’t book a room at the boutique luxury resort, opt for lunch at the Jade Mountain Club, where its burger is world-famous.

There are only so many places that can romanticize strenuous activities like hiking, and Saint Lucia is one of them. You won’t want to leave the island without traversing the mountain on the Tet Paul Nature Trail. Along the trek, you’ll sample naturally grown spices and fruits like bay leaf, moringa leaf, and guava that are so fresh you may feel like you have never tasted the real thing before.

Scuba diving is a must-do in Saint Lucia because the coral reefs are insane. Offered at resorts like Rendezvous, Jade Mountain, and Anse Chastanet, you can take a real-life Professional Association of Diving Instructors certification course. After instructions in a pool, you’re ready to go out to sea for a short period with your instructor and test your newfound skills. If you are already a PADI-certified scuba diver, you can skip the lessons and head straight to the ocean!

The post Lovers’ holiday: A romantic guide to ‘Helen of the West Indies,’ Saint Lucia  appeared first on TheGrio.