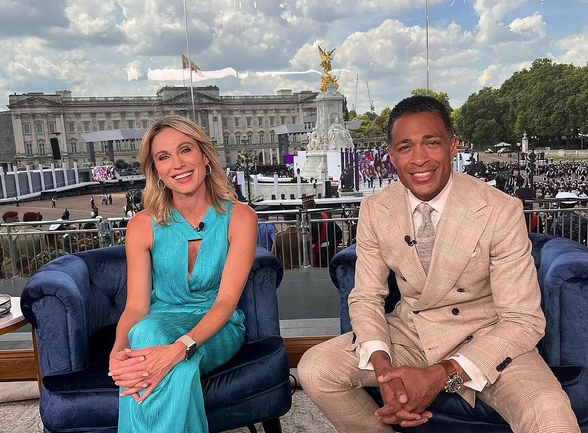 ABC News has launched an internal investigation into “GM3” co-anchors T.J. Holmes and Amy Robach’s scandalous romance to make sure no company policies were violated. Also, sources have come forward, alleging T.J. had affairs with two other women who no longer work for the network. Details inside…

Days after being taken off the air, ABC News has launched an internal investigation into “GMA3” co-anchors T.J. Holmes and Amy Robach’s scandalous romance.

ABC News is looking into T.J. Holmes and Amy Robach’s relationship to ensure the “GMA” co-anchors haven’t broken any company rules during their whirlwind romance. Sources tell TMZ, ABC’s human resources and legal departments are collaborating to investigate all aspects of the high-profile coworkers’ hookup.

ABC execs want to find out if T.J. or Amy, who have both been married to other people for 12 years, violated their contracts by using company resources to meet romantically, or whether or not they pressured ABC employees to keep their relationship on the down low. On Monday, T.J. and Amy were taken off air following reports of their romantic relationship.

ABC News correspondents Gio Benitez and Stephanie Ramos filled in for T.J and Amy on Monday, nearly a week after the Daily Mail exposed their scandalous relationship. The cheating scandal drew unwanted attention to the network after photos and videos of the couple canoodling surfaced.

ABC News’ President Kim Godwin informed staffers on Monday morning that the “distraction” had become too significant and that the co-anchors will remain sidelined until the network figures out the next step. Sources tell TMZ that Kim Godwin “worked through the weekend” with other executives before pulling T.J. and Amy from the anchor desk.

According to reports, the decision to take them off the air was in no way a disciplinary action.

Some staffers were upset because the network failed to take a closer look at their romantic relationship at first. When news broke that T.J. had multiple affairs with ABC producers, ish really hit the fan.

“The relationship is all anyone can talk about. Staffers are filled with mixed emotions, because these two are very respected amongst the company, and are also two consenting adults, living their lives,” another source told Entertainment Tonight last week. “Everyone was wondering when the bosses would step in, and now that they have, it’s a waiting game.”

According to ET, T.J. has had several relationships with female colleagues while working at ABC. The 45-year-old TV personality allegedly had an affair with a producer, who left the morning show in 2017. Furthermore, two sources spilled tea, saying that T.J. was romantically involved with a THIRD woman who no longer works at the network. Chile…

It’s reported T.J’s wife of 12 years, attorney Marilee Fiebig Holmes, was “blindsided” by the affair and scandal involving Amy, although she had some suspicions.

“She’s devastated. She had no idea,” the source told Page Six. “They haven’t been together in [a while], but they were trying to work it out.”

Sources tell ET, Marilee became suspicious of his friendship with Amy over the summer while on vacation in the Bahamas to celebrate her husband’s 45th birthday.

“They had already been through so much trying to fix their marriage after his affair with the former GMA producer, and then she saw a birthday card from Amy that was way too familiar,” the source said. “[Marilee] was done after that.”

Although the couple had been separated for six months, Marilee thought they were working to save their marriage, but that clearly isn’t the case. T.J. and Marilee tied the knot in March 2010 and have one daughter together. He has two children from his previous marriage.

Amy, 49, has been married to former “Melrose Place” star Andrew Shue for 12 years as well, and they have a blended family complete with 3 children.  Amy has two from her previous marriage and Andrew has one.

It’s alleged the “GM3” co-hosts didn’t become romantically involved until after August. The Daily Mail reports that their sources say BOTH T.J. and Amy quietly split from their spouses back in August.  It’s reported Amy and Andrew were in the process of finalizing a divorce settlement and the pair “had issues” before her romance with T.J. was exposed.

Neither have confirmed this publicly and they are both still legally married.

Amy Robach was spotted making rounds in NYC for the first time since the cheating scandal surfaced.

We’ll just have to see what happens after ABC News does their investigation.